“Why in the world would you do that?” 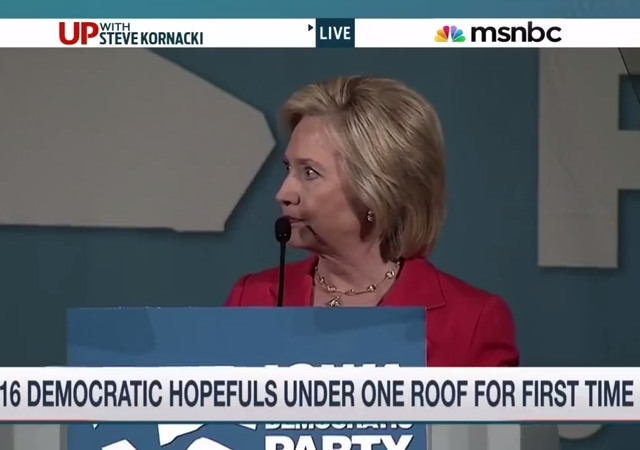 Yesterday in Iowa, the Hillary Clinton campaign told their young supporters they couldn’t speak to the press. This clumsy and seemingly paranoid move earned Hillary Clinton mockery even on MSNBC.

Daniel Halper of the Weekly Standard has the details:

“Here’s what struck me,” said Susan Page of USA Today, “when I read the coverage in the Des Moines Register this morning. Jennifer Jacobs, who’s been on your show, was covering this last night. Big demonstrations outside of young people for O’Malley and Hillary Clinton. She went up to the Clinton supporters — these are protesters for Clinton — and they were told they were not allowed to [speak to] a reporter.”

According to the Daily Mail, Hillary was outshone in Iowa by Bernie Sanders and Martin O’Malley:

Following Clinton, who spoke in sharp cadence about herself and her family’s story, the two men wowed a crowd of more than 1,300 with powerful appeals to progressives.

Clinton entered the presidential race as the presumptive Democratic nominee, but she has at least two formidable foes who exceeded her ovations and grew their following on Friday in Cedar Rapids, Iowa.

Friday night marked a first for Democrats in the 2016 race for the presidency: a ‘cattle call’ audition where every declared candidate spoke to a large audience in an early primary state on the same night.

Hillary is not going to be the Democratic nominee.

The problem is, she declared way too soon. She should have waited till about a week before the election.

Hillary the Myth is way more popular than The Real Hillary.

“She’s great til you actually get to know her”

Because if they just told them not to mention they are being paid, it would come out.

That would not look very inevitable.

That “unknown” had a lot of dark movers helping him out. They even planted a traitor in her staff – Patti Solis Doyle. A whole lot of documented cheating during the primaries. Never try to say Obama won anything fair and square – no even the Nobel Prize (to their everlasting sheme).

Gee, the MSNBC troglodytes are confused that the lady who set up her own homebrew email server so she could frustrate investigators and control what emails became public wonder why she’d tell her followers not to talk to the press.

Yeah, who would have suspected Hillary Clinton of this sort of micromanagement. It’s completely out of the blue!

Tis a mystery wrapped in an enigma.

Libs as a matter of faith swear that Conservatives want to control your life. But lookie here. Hillary insists on controlling the lives of her own supporters. Imagine all of Washington, and all of us, under her thumb.

Hillary-in-Chief has requested “The Cone of Silence”…

Ancient mother proverb: “When you have nothing worth saying, say nothing.”

They probably didn’t want more videos of her supporters admitting that the only reason they support her is that she’s a Democrat. And a woman. Those vids of people sitting like deer in headlights, completely perplexed by the simple questions about Hillary’s accomplishments were killers.

This may be worse.