Here’s why fundraising is not Carly Fiorina’s priority

Here’s why fundraising is not Carly Fiorina’s priority

Getting on stage for the debates is Priority No. 1 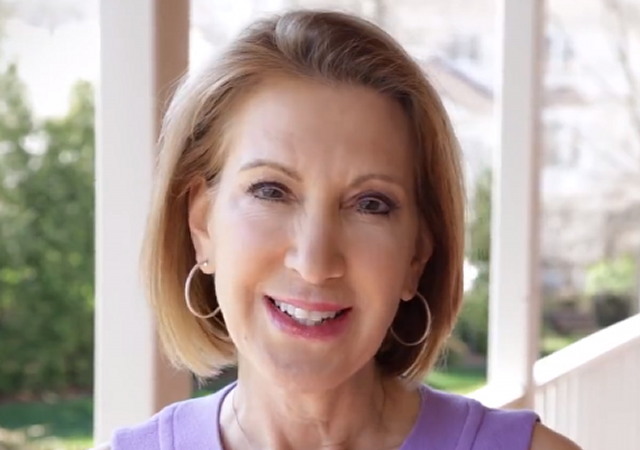 Monday, Carly Fiorina’s campaign announced they’d raised a total of $1.4 million dollars since their early May launch. But $1.4 million is a drop in the bucket compared the fundraising of a few other Republican presidential contenders.

According to the Wall Street Journal, “In an email entitled “Momentum,” Frank Sadler, her campaign manager, reminded supporters Mrs. Fiorina’s campaign “launched from a standing start,” and took a glancing shot at Republican front runner Jeb Bush, the son and brother of presidents.”

“Until she announced her candidacy, Carly was leading two highly effective charitable organizations,” he wrote. “She was not building the political infrastructure that other presidential candidates spend years (or generations) to cultivate.” He doesn’t mention the fundraising number—which covers money raised through June 30, the end of the second quarter—until the second page of his memo.

Mrs. Fiorina, who is considered a longshot candidate for the GOP nomination, is winning 2% of Republican primary voters’ support, according to a RealClearPolitics average of five recent national polls.

Sadler isn’t wrong. Baring the ground game Fiorina built in her failed Senate run, her campaign started without much of a foundation. Now that Fiorina is fully invested in the race, the wisdom of jumping in cold is a discussion for another time.

The fundraising news isn’t all dismal for Fiorina. Super PAC “CARLY for America” has raised $3.4 million, more than twice that of her official campaign. To keep her campaign operation lean, Fiorina outsourced a chunk of traditional campaign operations to the Super PAC. Tasks like rapid response, event planning, and even fundraising are PAC responsibilities, according to the Washington Post.

Her official campaign has shifted some of the most fundamental political tasks to the super PAC, from rounding up endorsements to assembling a ground game and even answering questions about Fiorina’s business background.

Indeed, the first Fiorina field office of 2016, in South Carolina, belongs not to her campaign but to her super PAC. When voters search for “Carly Fiorina” on Google, the first ad that pops up is for her super PAC, not her campaign. And on her recent New Hampshire visit, it was Fiorina’s super PAC that was advancing her events, even staging them with stickers and signage.

“It’s a modern approach to the ways campaigns are done nowadays,” said Leslie Shedd, spokeswoman for Carly for America, the pro-Fiorina super PAC with a name so indistinguishable from the official Carly for President campaign that the Federal Election Commission has demanded they change it.

The deference comes down to cash. The Fiorina super PAC is expected to have far more money: Fiorina’s friends and former colleagues in corporate America (she was the first female CEO of a Fortune 20 company) can make only $2,700 in direct campaign contributions but can give unlimited sums to the super PAC.

“The actual Fiorina campaign has to be a bit more judicious with its resources than the super PAC does,” said Keith Appell, a veteran GOP consultant and senior adviser to the super PAC.

While there will be plenty of headlines focusing on Fiorina’s pocket change contributions, Fiorina’s focus seems to be getting a coveted spot on the crowded GOP debate stage. If Fiorina is able to make her way to the stage, the fundraising part will take care of itself.

Regardless of where she ends up in the primary, I’d love to see Fiorina on the debate stage. Not only is she incredibly well-spoken and arguable one of the the best spokeswomen us right-leaning gals have on the national stage; Fiorina has an incredible message of unlocking the potential in each individual that desperately needs primetime play.

I like her and I’ve ponied up a few bucks for her the last few months. I also am donating to the Rick Perry campaign and am considering doing so for Ted Cruz. That’s about the only ones I consider worth it.

The rest of ’em? Forget it.

I was supporting my native son, Rand Paul, until I read that he hobbled Sen Vitter’s investigation regarding Congress is a small business and exempt from Obamacare. I wrote him and asked why he did that and no response, so far. So, forget it, also, Rand!

The idea that serious candidates like Fiorina would be left out of debates for clowns like Trump (or Paul, who has no chance either) is bad for the party.

Media coverage is already oriented towards poll reporting – the “state of the horse race” – instead of real issues. This suits the Democrats, who lose on all issues as people become informed.

We should not be suckered into that mindset.

The optics are not good. The campaign seems too amateur to play on the same court as the serious candidates. At this stage it’s all advertising, and they should be doing a better job of it.

“She was not building the political infrastructure that other presidential candidates spend years (or generations) to cultivate.”

Translation: she’s just another rich person on a lark, not a dedicated politico whose career has been building for years to a Presidential crescendo.

And who does that sound like? Why yes, it sounds like John Kerry (who served in Vietnam, you know). Not an impressive model for a political tag-line.

Aside from advertising, her most fundamental problem remains: Americans whose educations and careers were built in the STEM fields, the ones who have been familiar with HP for their entire working lives, don’t see a hard-charging, dynamic CEO; they see a poster child for Affirmative Action failure. Basically, another Obama.

But there’s not much her campaign can do about that now, except play the old “ignore and deny” game. And that would make her seem an awful lot like Hillary.

She destroyed American STEM careers & shipped those jobs overseas, and gave herself piles of money & a golden parachute for the “hard work” of screwing America.

Just what we need.

You mean she worked for Disney…????

BTW, put up some links, ya moron.

I would expect CF or her pac to be using her GOOD360 “Rolodex” to solicit contributions. Contacts with most of the Fortune 500 CEO and upper mgmt to solicit for her charity would seem to be a valuable list. That to me seemed like it would be a “secret weapon”.

Also her state level organizing for the Unlocking Potential Project would give her a lot of contacts in key states to form the basis of state level campaign organizations — her ground game.

Money follows ideas. She has ideas and experience.

She has enough money to get through the immediate time crunch. Her message breaks through the media clutter if folks will just listen to her.

Yet the time crunch is predicated on the first debates, so she properly prioritizes her efforts.