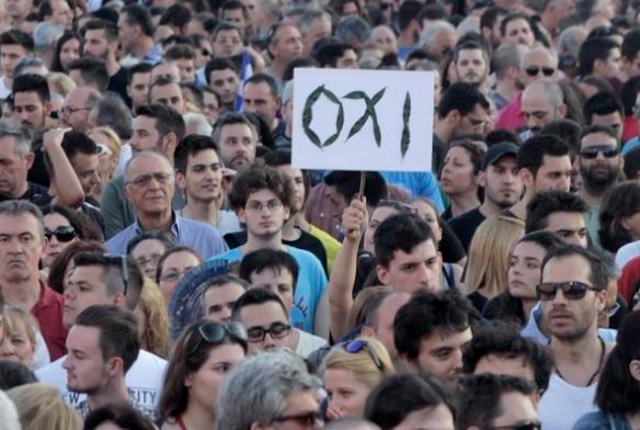 US stock prices sank into the negative this morning in the wake of Greece’s landslide “no” vote rejecting a referendum that would have created yet a new layer in the flailing country’s creditor-debtor relationship with more stable Eurozone countries.

In the US, the Dow showed a mid-morning flatline, but recovered by the afternoon. Markets in Asia, however, experienced a more dramatic response, and Japan and South Korea both closed under significant decline. The response of the European market was more modest, but still reflected uncertainty as Greece pushes its creditors for a mercy ruling.

“There’s been no panic of any kind,” Paul Hickey, co-founder of Bespoke Investment Group told clients. “The market remains faithful that the European Central Bank and other European institutions have done an adequate job firewalling the eurozone against Greece.”

Investors, at least so far, are behaving as if they do not fear financial contagion from the Greek crisis, unlike the financial infection that spread globally after Wall Street bank Lehman Brothers filed for bankruptcy back in the fall of 2008.

“The week ahead will be dominated by Greece and the implications of the landslide ‘No’ vote,” says David Kelly, chief global strategist at JPMorgan Funds, adding that he expects difficult negotiations ahead between the two parties.

Kelly summarizes what investors are watching: “For global investors, the bigger question will continue to be whether any economic, financial or political ripple effect is likely to emerge from the crisis. As of right now, the answer still appears to be no.”

This attitude makes sense for long-term investors. The crisis in Greece is nothing new, and the “no” vote was foreseeable, if not expected. Still, Eurozone officials are proceeding with caution with regards to how they’ll handle the situation as creditors.

The Greeks are expected to push for either a debt cut, or a major restructuring, a move that has the rest of Europe on edge:

A spokesman for German Chancellor Angela Merkel said there was currently “no basis” for talks on a new bailout and the ball was in Greece’s court.

Mrs Merkel is to meet French President Francois Hollande in Paris on Monday.
Germany’s economy minister has warned that any unconditional debt write-off would destroy the single currency.

“I really hope that the Greek government – if it wants to enter negotiations again – will accept that the other 18 member states of the euro can’t just go along with an unconditional haircut (debt write-off),” said Sigmar Gabriel, who is also Germany’s vice-chancellor.

“How could we then refuse it to other member states? And what would it mean for the eurozone if we’d do it? It would blow the eurozone apart, for sure,” he added.

Greek Prime Minister Alexis Tsipras is meeting today with party leaders, and is expected to outline his new negotiation strategy.

Today crude prices also responded to the crisis in Greece, falling 6.3%. This adds to the pressure already mounting on the market as the US and Iran go into the eleventh hour of negotiations over a nuclear deal.

Compared to our own stock-market bubble, the Greece fire isn’t a fart in a gale.

Where did Obama spend over $8 trillion? Our foreign-held debt has increased to 1/3 of GDP. I suppose since that question is not asked often enough, the implication is overlapping and convergent interests. We can assume that Greece enjoyed a taste of utopia on the same terms. Their creditors cannot possibly be so naive.

How many slush funds, how many under the table deals with big business and big labor, now many International corporations deals were there to grease the skids for the Pres, his pals and his Party? The Pres has abandoned our allies, abandoned our dying citizens in far away lands, abandoned the military… when it comes time he will abandoned the people here in the USA.

(Sadly, I speak as a Puerto Rican.)

More good reading on this (it’s been going on in crisis mode for at least the last 5 years – but no U.S. Mane Stream Meat Market…er….Media coverage until now) over at Mish.

Email from Greek Voter With “No Dreams and Nothing to Lose”; Greek ‘No’ Vote Demographics