Putting the “armed” back in Armed Forces 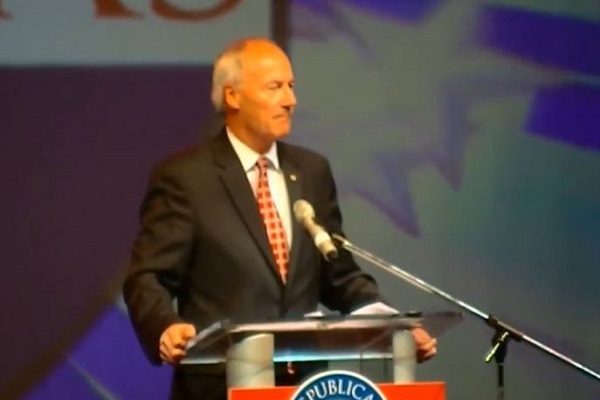 While we mourn, the media is puzzling over what the motive might possibly be for Muhammad Youssef Abdulazeez, a Muslim from Kuwait who became a naturalized American citizen and has recently made trips to the Middle East from which he came back “changed,” to attack a military recruitment center.

2010: Jihadist Muhammad Hussain plots to blow up Army office: “Whoever joins the military, they will be killed.” pic.twitter.com/hwbzZBEv9u

ISIS and other terrorist groups like al Qaeda have long threatened our military members and their families on American soil, and Islamic terrorists have carried out attacks here before.  Following the attack on a recruiting office in Little Rock and the Fort Hood terror attack (sorry, Obama, no one believed then or believes now that was “workplace violence”), we all wondered why, in light of the serious threat to their safety, an Army base filled with trained soldiers was a gun free zone.

The Fort Hood and Little Rock terror attacks were in 2009, and the Virginia terror attacks on the Pentagon and recruiting centers in 2010-11, and here we are in 2015, and our military installations and recruiting centers are still gun free zones.  Men and women trained to use firearms and trusted to protect our nation are not trusted to protect themselves.

Yesterday, Army Chief of Staff Ray Odierno said that a review will be made of security measures at recruiting stations.  Considering that the previous reviews in light of the Fort Hood terror attack and the other threats noted above (and those the public isn’t aware of) led to the Pentagon urging “watchfulness” and “awareness” of surroundings, this promise of yet another review doesn’t seem to hold much promise.

It’s difficult not to be snarky.  Very difficult.

Let’s imagine that Obama’s Pentagon had taken the Fort Hood and other terror attacks, as well as the many failed attempts at similar attacks, seriously.  Let’s imagine that there was armed security at military recruiting centers starting back in 2009.  First, the deterrent would be great.  The reason these terrorists are confident enough to go guns blazing at Marines (and other military personnel) on American soil is the well-known fact that they are not armed and cannot protect themselves.  Terrorists might think twice about opening fire on a group of armed Marines, soldiers, sailors, airmen, et al.  Second, if a terrorist did decide that sounded like a good plan, he (or she, I guess) wouldn’t get very far because they would quickly find themselves under return fire.

Yet Ray Mabus, Secretary of the Navy, seems to find the thought of such an attack “unfathomable.”  Really?  How can it possibly be unfathomable to imagine that Islamic terrorists will do exactly what they have done, have tried and failed to do, and have promised to do with increasing frequency?

According to his statement:

In addition, the Governor has issued a proclamation ordering the state flag of Arkansas to be flown at half-staff from sunrise to sunset on Monday, July 20, 2015 as a mark of respect and as an expression of public sorrow for the four Marines killed, including Arkansas native Staff Sgt. David Wyatt of Russellville.

“Our hearts break at the news of another senseless act of violence and terror, this time out of Chattanooga,” Governor Hutchinson said. “Our prayers go out to all the families of the victims, especially the family of Staff Sgt. David Wyatt of Russellville, one of Arkansas’s own.

Oklahoma governor Mary Fallin has issued a similar order, as has Louisiana Governor Bobby Jindal.  I imagine that in the coming days, other governors will follow suit. Arming the National Guard is a good move, and one that the Pentagon should adopt for its full-time military personnel on military installations and at recruiting offices.  Until then, maybe the National Guard will have to protect our troops here at home.

This is SO right. Especially the choice of images.

Meanwhile, in Tennessee, local residents are doing the job our military isn’t allowed to do – protect its own.

FOX Atlanta – The morning after a deadly attack on two military centers in Chattanooga, residents in Hiram are standing watch outside the local recruiting office with their personal firearms. It is their unique way of honoring the fallen Marines and they said to protect the lives of those who serve in the military.

It’s a horrible to see American citizens gunned down like that. But you need to keep your facts from being fuzzy, Fuzzy. Your link associating Obama with the ‘unfathomable’ quote is wrong:

“Ray Mabus, the U.S. Navy secretary, said: “While we expect our Sailors and Marines to go into harm’s way, and they do so without hesitation, an attack at home, in our community, is insidious and unfathomable.”

This is a national tragedy for all American. Why do you politicize it? Oh, right – just following you natural inclinations for political distortion.

Oh! Thanks for catching that, Jay! I’ll update and correct.

It was not an attempt at distortion, by the way; it was an honest mistake that I will correct. I have no “natural inclinations for political distortion,” either.

It’s been a while since you posted. I’d forgotten what an irredeemable asshole you are.

Remember when he condemned a newspaper based on a bunch of front pages that turned out to have been lame photoshops, but which he was just gullible enough to believe? Good times, good times 🙂

“Why do you politicize it? Oh, right – just following you natural inclinations for political distortion.”

This is called “projection”…

“This is a national tragedy for all American[s].”

But Barracula choked it down and still managed a trip to NYC to see a play, raise political $$, AND work in some golf.

Watch the Admirals & Generals run screaming from the idea of military personnel being armed. The very last thing they want to do is give authority to junior enlisted personnel.

Just a small note…these were NOT “junior enlisted personnel”. They were apparently career-track NCOs.

The NG might have weapons, but let’s wait and see if they are allowed to carry /loaded/ weapons.

How long before Obama and his lap dog generals find a way to foil this effort?