Fort Hood Survivor: The War is Here on U.S. Soil

Fort Hood Survivor: The War is Here on U.S. Soil

“Call it what it is” 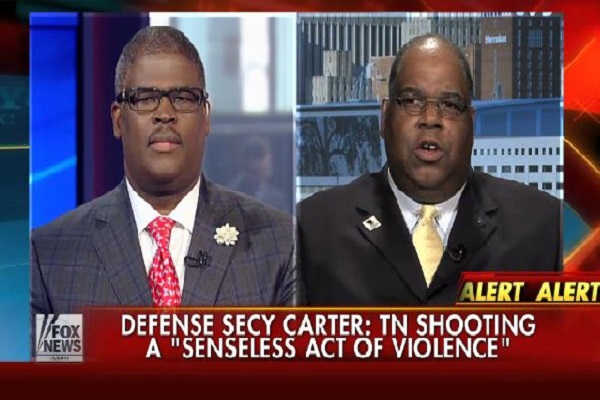 Despite being shot multiple times, Sgt. Alonzo Lunsford survived the 2009 attack at Fort Hood. He was recently interviewed by Charles Payne of the FOX Business Network and offered some sober commentary on the shooting in Tennessee.

‘War is here on US soil’: Ft. Hood victim says Obama WH needs to get head out of a**

The White House has its head where it doesn’t belong.

Saying the “war is here on U.S. soil,” a victim of the 2009 Fort Hood attack by Army Major Nidal Malik Hasan described the killing of four U.S. Marines in Chattanooga, Tennessee, on Thursday as “an act of terror.”

“They need to get their heads out of the fourth point of contact and call it what it is,” Lunsford said of the Obama administration.

The “fourth point of contact” is Airborne military jargon for the derriere, which is a somewhat more polite way of telling Obama to get his head out of his **s.

Meanwhile, over at ABC News:

I would suggest that the good citizens of Georgia and Virginia have the right idea.

http://thisainthell.us/blog/?p=60905 They have decided that, because the recruiters are required to be without means for self-defense, ordinary citizens who have gun permits and training should step up.

So do six governors, http://thisainthell.us/blog/?p=60911 who have armed the national guard.

“Chattanooga terror investigation finds no information on suspect’s motive”
Where are they looking? The golf course?

Funny! Of course they know what the motive is, just won’t say it. Why in the world are they tap dancing around this 800 pound elephant or pig in the room!?

Say it lying media. Chattanooga was a Terrorist Attack!

‘Senseless act of violence?’ It made a lot of sense, if you’re a radical Islamist, or an American traitor like Barack Obama.

Carter’s words could be called a senseless act of speech. But we know how calculated they were.

“Ft. Hood victim says Obama WH needs to get head out of a**”

This statement is in error. It contains the assumption that what is happening isn’t exactly what Obama wants to happen.