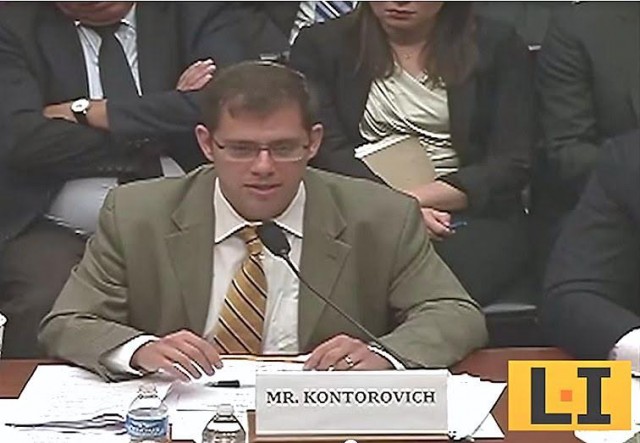 The Security Subcommittee of The House Committee on Oversight and Government Reform Committee held a hearing on July 28, 2015, on The Impact of the Boycott, Divestment, and Sanctions Movement

The Tower has a write up on the full scope of the hearing.

In a prior post, we featured the testimony of Daniel Birnbaum, CEO of SodaStream International, about the threats, intimidation and violence of the BDS movement directed at SodaStream for 8 years, Epic House Testimony – BDS in business of “Manipulation, Violence and Destruction”

In this post, we focus on the testimony of Northwestern Univ. Law Professor Eugene Kontorovich

Prof. Kontorovich’s full written presentation (embedded at bottom of this post) contains important background as to the role Congress can play in opposing BDS consistent with U.S. law, policy and history of involvement in the issue. The subjects covered include:

Once Again, BDS Lies About Israel and International Law

You really must watch Prof. Kontorovich’s lecture on The Legal Case for Israel, which methodically over 40 minutes lays bare and refutes almost every BDS talking point you have heard about “the occupation” and alleged violations of international law. Many of those talking points have become (false) common wisdom that infects U.S. and European policy towards Israel and Judea and Samaria.

The fourth section of Prof.Kontorvich’s written congressional testimony is particularly important, because we often hear BDS advocates — particularly among European governments — claim that boycotting and/or labeling products from Israel and/or Judea and Samaria is required by international law.

Like so much of the BDS rhetoric about international law, that claim is false, as Prof. Kontorovich explains in his written testimony:

A major contention of the economic campaign against Israel is that its control over the Golan Heights and parts of the West Bank violates international law and that it is also illegal for Jews to live in these areas (the claim of “illegal settlements”). As a result of this alleged illegality, they further claim that it is illegal for Israel to conduct business in these areas, and that third parties have a duty to boycott such illegal businesses.

Even assuming, for the sake of argument, that Israel has no claim to these territories, these contentions have absolutely no basis in binding international law. They contradict fifty years of state practice, the opinions of all courts to have ruled on the issue, and all relevant treaties.

The evidence for this is overwhelming, as I survey at length in a newly published article in the Columbia Journal of Transnational Law, Economic Dealings With Occupied Territories.[19] The evidence that such activity is legal is overwhelming, and only some broad points can be mentioned here.

Prof. Kontorovich points out how the world applies a different standard to Israel than applied to other instances of alleged illegal occupation, such as Western Sahara (by Morocco) and Northern Cyprus (by Turkey):

First, there is state practice. U.S. companies, like those of countries around the world, have long been active in occupied territories like Western Sahara (Morocco) and Northern Cyprus (Turkey), without any objections from the State Department, or any calls for boycotts.

The United States occupied West Berlin until 1990, in a situation that at the time seemed of indefinite duration. No one raised an eyebrow when Burger King opened a branch in the American Zone. The United States does not recognize the legitimacy of the Turkish presence in Northern Cyprus, which has occupied the area since invading it in 1974 and populated it with tens of thousands of settlers. Yet this has never been thought to be a barrier to companies doing business there….

In the international arena, the Fourth Geneva Convention explicitly countenances business in occupied territory, and the employment of people residing there in factories and other businesses.[21]

In 2000, the Deputy Secretary General of the U.N. was asked for a legal opinion on oil exploration by a U.S. and French company in Moroccan-occupied Western Sahara. His opinion surveyed existing international law and concluded that there is no prohibition on doing business in such occupied territories, even against the objections of the occupied people. The same position was recently adopted by the Legal Adviser to the European Parliament. And just last year, the United Kingdom Supreme Court and a French appeals court ruled that companies do not violate international law by doing business in Israeli-controlled territory in the West Bank. There are simply no cases to the contrary.

To put it simply, occupation is not uncommon. Leaving aside the question of whether occupation accurately describes the status of Israel’s presence in the territories, the economic warfare directed at it is unique.

The real fight currently is not so much over BDS, which has almost no economic impact on Israel itself, but over possible EU adoption of BDS-style policies. If the EU does so, it would be engaging in unlawful and discriminatory trade practices uniquely against Israel:

In the next few months – possibly as early as September – the European Commission plans to adopt a measure requiring special labeling for Israeli goods related to “settlements,” as well as other restrictions, including the outright exclusions on some agricultural products.

These are not general measures applying to trade with what the EU considers occupied territories; rather, they are special sanctions aimed solely at Israel. Thus the statements of European officials show that these actions are another step in a systematically implemented series of increasingly serious trade restrictions against Israel. Proposed future steps include restrictions on all Israeli banks because of their operations in disputed territories.

In other words, the EU is self-consciously attempting to pioneer a new model for trade with Israel and relationship to the areas under Israeli jurisdiction that fundamentally differs from its relationships with other countries.

The proposed EU measures are unlawful trade barriers against Israeli products. They violate European duties under multilateral and bilateral trade agreements. In particular, the proposed measures raises strong claims by Israel under articles 2.1 and 2.2 of the WTO Agreement on Technical Barriers to Trade, as well as the Articles IX, X and XIII of the General Agreement on Trade and Tariffs, Article 2.3 and 5.6 of the Agreement on the Applications Sanitary and Phytosanitary Measures, among others.

Every excuse the EU raises for treating Israel differently does not hold up to scrutiny:

Nor is there any merit to the EU’s contention that its trade obligations to Israel only apply to what it regards as Israeli sovereign territory. There is no principle in trade law restricting the application of trade agreements to sovereign territory. Trade agreements often apply to areas where sovereignty is not recognized or disputed, such as Taiwan, the Falkland Islands (Malvinas), and the Palestinian Authority. Indeed, the EU itself includes occupied Western Sahara within the territorial scope of its treaties with Morocco, undermining its contentions about Israel.

What Can Congress Do?

So what can Congress do?

It recently passed, and Obama signed, trade legislation making opposing BDS a primary goal of the U.S.-E.U. free trade agreement currently under negotiation. That was viewed as a huge victory against BDS and as facilitating an end to the upcoming EU economic war on Israel.  Then the State Department appeared to signal that at least as to “occupied territories” it would not honor the congressional mandate. Prof. Kontorovich addresses this development in his appearance (see video above). As of this writing, the administration’s position is uncertain.

Prof. Kontorovich addresses this issue in his verbal (see video above) and has Recommendations at the end of his written presentation. He surveys several pieces of pending congressional legislation, and concludes:

All these provisions are well within the zone of past congressional and executive policy, and simply update boycott laws to confront current challenges (while at the same timing adopting a softer and less restrictive approach than the 1970s laws). Nothing in the Constitution, U.S. law or policy, or international law, interferes with Congress acting on this enumerated power to prevent insidious discrimination, strengthen an ally, prevent actions to prejudice a negotiated solution, and defend the integrity of the international trading system.

In coming months we will highlight congressional proposals.

Keep in mind the proposals seek to level the playing field internationally against dishonest and unlawful attempts to single Israel out using standards and sanctions not applied to any other country, much less any of of our allies.

Europe cannot be trusted to do the right thing. As history and current events prove.

That would be the European Union.

Interesting food for thought, believe it or not.

“Is Europe the new Babylon?”

Why not fight them in kind. End the sales of 100% of all Israeli technology, software, medical and agricultural science of all kinds from Europe? Let Europeans sort it out for themselves.