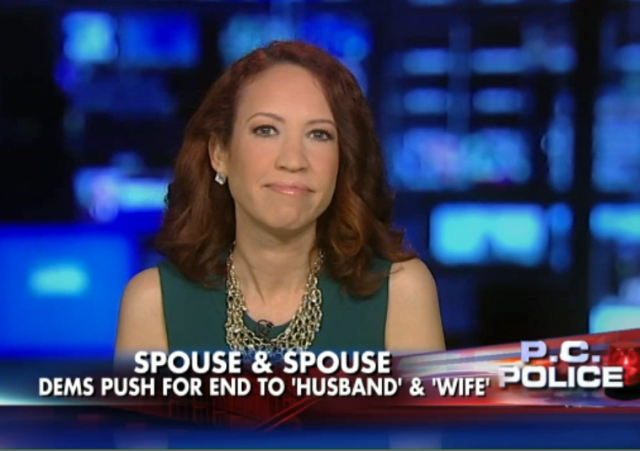 Now that the Supreme Court decision on gay marriage has been made, liberals have set their sights on destroying the language used to describe traditional marriages.

More than two dozen Democrats have proposed legislation that would eliminate the words “husband” and “wife” from federal law.

Those “gendered terms” would be replaced by “gender-neutral” words like “spouse” or “married couple,” according to the bill from Rep. Lois Capps, D-Calif.

“The Amend the Code for Marriage Equality Act recognizes that the words in our laws have meaning and can continue to reflect prejudice and discrimination even when rendered null by our highest courts,” Capps said. “Our values as a country are reflected in our laws. I authored this bill because it is imperative that our federal code reflect the equality of all marriages.”

The Supreme Court ruled in June that the 14th Amendment to the Constitution means all states have to license same-sex marriages, a ruling that effectively ended the same-sex marriage debate in America. Capps said her bill was aimed at taking the next step, which is to ensure the United States Code “reflects the equality of all marriages.”

Norvell Rose of Western Journalism makes a good point about this:

And should the Capps bill to ban the traditional references to husband and wife win approval on Capitol Hill, one can reasonably ask how long it will be before gay marriage advocates and activists lawyer up to go after churches, chapels, and justices of the peace who dare to ask, “Do you take this person as your lawfully wedded husband/wife?”

Then, of course, there are a couple more inviting targets for the PC police who could find cause to take legal potshots at the generally accepted terms “bride” and “groom.”

Where does the PC snowball stop?

The answer is that it never stops.

They never ever stop. https://t.co/H5JwYxhEwB

The Perpetually Outraged Minorities still have their panties in a wad. This time, removing the terms “Husband” and “Wife” means a goodly portion of the Bible (©1450 B.C.) will need to be re-written.

Guess that means I’ll be guilty of thought crimes for the rest of my life since God’s Law trumps Man’s law every time.

Time for some intra-PC warfare! Pass the popcorn!

A girl I work with and her wife are both on FB, they always refer to each other as “my wife”. They’ve been together for ages, but only recently were able to marry, and I wouldn’t want to be the one who has to tell them they have to stop using the terms for each other that they’ve only so recently been granted the right to adopt.

They have always had the right to call each other by those terms. They could even call each other “husband” if they so chose. The issue was not how they refer or relate to each other, but how the rest of society is required to treat their relationship.

If they were among those demanding that everyone else be required to treat them as “wives” to each other, I have no sympathy at all for whatever loss they might feel as their allies continue to bulldoze over the meanings of words and the definitions of institutions, and to compel everyone else to play along.

My younger daughter is going to be the groom. I asked her if that means I don’t get to walk her down the aisle. She told me that she would insist that I do.

Born Lois Ragnhild Grimsrud in Ladysmith, Wisconsin, the daughter of Solveig Magdalene (née Gullixson) and Rev. Jurgen Milton Grimsrud, her father was a Lutheran minister. Both of her parent’s families came from Norway.[1] She has lived in Santa Barbara since 1964. She was educated at Pacific Lutheran University with a bachelor’s degree in nursing. She earned a master’s degree in religion at Yale Divinity School in 1964[2] and a master’s degree in education at the University of California, Santa Barbara.

In 1960, while at Yale, she married Walter Capps, a divinity student at Yale who later became a prominent religious studies professor at UCSB; they eventually had three children. Walter died in 1997 and their eldest daughter Lisa died in 2000. Lois Capps worked for 20 years as a nurse and health advocate for the Santa Barbara public schools and also taught early childhood education part-time at Santa Barbara City College.

wants to FURTHER corrupt our language.

Why not “Husband & Husband” or “Wife and Wife” – this PC crap is insane.

Are we headed for poker and pokee?

More like Sucker and Bigger Sucker! There’s some born in the Demorat Partee every day you know.

I wonder if “equal” advocates will stubbornly uphold selective exclusion. They should strike the lackluster rainbow flag.

Except in King v. Burwell, of course.

It always comes down to the definition of what “is” is, doesn’t it.

“Marriage” has a meaning. It ISN’T what any-flucking-body says it is.

Notice what she actually said:
“The Amend the Code for Marriage Equality Act recognizes that the words in our laws have meaning and can continue to reflect prejudice and discrimination even when rendered null by our highest courts,” Capps said.

Call me anything, but don’t call me “late for dinner”.

No, not really. Call me “Msssss. Johnson”, love interest of Flash Gordon.

For your wedding in Left Land…

And some of these dim bulb Dems thought it was only about “fairness” of SSM. With the Progressive, it is never about what they are selling, but what comes after that they don’t disclose. Suckers.

It’s elementary, my dear Watson. The fiends are trying to homo-genize the language. How imprecise of them.

The words “husband” and “wife” “reflect prejudice and discrimination.”

My husband would think this is nuts.

So does my husband’s wife.

Up next – any and all gender specific honorifics: son/daughter, aunt/uncle, grandma/grandpa, etc…

Let me introduce you to a new trio family in town.

Take your damned hands off my poor, innocent language; it is just fine as it is! The only reason for gender identifiers to be purged is to satisfy your own personal agenda and that is not nearly enough reason for the vast majority to kowtow to your childish demands. SCOTUS gave you the right to use the word marriage rather than “civil union” for your partnerships (and even that is no more than semantics) so shut up and go home; you won.

Purge all references to “husband and wife”? No! Not only “No”, but “Hell No!”

Cool – another stupid “thou shalt” from the Language / Thought Police that I will happily mock!

No surprise. The Gaystapo has to find some new outrage to keep the money flowing in.

I think it goes beyond money, or cooking up artificial outrage. For many, the goal was always ripping apart “heteronormativity” and eventually abolishing marriage as the core social institution.

Yet another attack on the family as the fundamental unit of a healthy society.

They won’t stop until the previously-normal two-parent (mom and dad) family is not only abnormal (which it already is in some areas), but frowned-upon, offensive, and eventually banned.

Purging “husband” and “wife” from the language has nothing to do with same-sex marriages.

It has everything to do with gender dysphoria(formerly gender identity disorder) and all the related “changes” and “reassignments”.

Example: Bruce Jenner is now Caitlyn Jenner, and though Caitlyn may have the body of a woman, Caitlyn still has the DNA of a man. So what is Caitlyn, exactly?

More to the point, what is Caitlyn to the former spouses? Ex-husband, or ex-wife? Caitlyn is not a man, so the “ex-husband” moniker doesn’t fit, but neither does “ex-wife” as Chrystie Jenner, Linda Thompson, and Kris Jenner are not homosexuals and none of them married another woman. Neither term is 100% correct.

But rather than just accept that “former spouse” is good enough and leave the “traditional” terms alone, the Left demands that any and all gender-specific labels – and all the “traditions” they represent – be banned.

Talk about a “nuclear option”….

I guess it’s up to me to be the dissenting voice here, although I’m surprised I need to be (given that this is LegalInsurrection and most of the focus is on the law, its precise parsing, and so on). I think this (“this” being the move to generalize the language in federal law, not the fears of some kind of future move to outlaw the phrase “bride and groom” or whatnot) just makes sense given the Supreme Court ruling.

Some of it was long overdue anyway, even before gay marriage was a possibility.

For example, in 42 USC 1652, regarding disability/death benefits to surviving dependents of people employed in US military bases outside the US, it reads, “except that dependents in any foreign country shall be limited to surviving wife and child or children”. As written, that rules out benefits to surviving *husbands* of women employed on US bases. It should long ago have been changed to “spouse” or perhaps “dependent spouse” (as has actually been previously done for dozens of other similar instances). There are many other cases in the US Code which still have similar deficiencies, such as 30 USC 902, 5 USC 5561, 8 USC 1353, and more. It’s not always the case that the husband is the federal employee and the wife is the dependent, and federal law should not remain written in a way that excludes equitable treatment when it’s the other way around.

As an added benefit to the proposed revisiting of instances of the terms “husband” or “wife” in federal law, we can clean up cases of cringe-worthy language such as in 45 USC 231f: “…in the case of a spouse or divorced wife, had such spouse’s husband or wife ceased compensated service…” Ouch, what? Are divorced husbands covered? Maybe?

And now with the advent of gay marriage, like it or not, similar “gotchas” in the way some portions of the US Code are written need to be similarly addressed. For example, 26 USC 6212: “In the case of a joint income tax return filed by husband and wife, such notice of deficiency may be a single joint notice” — as written, this requires separate notices to both individuals in a gay marriage, whereas married couples consisting of a “husband and wife” can be mailed a single notification. That’s just silly, not to mention a waste of paper and postage. It’s time to update the language to simply “married couple”.

There’s a similar problem in 26 USC 6231: “For purposes of the preceding sentence, a husband and wife (and their estates) shall be treated as 1 partner” — given this, the IRS would have to treat married gay couples as 2 partners, rather than a single financial entity, for no good reason other than that’s what the language states.

There are sound legal reasons to update the language in federal law regarding married couples.

They have already declared all state marriage statutes between a man and a woman null and void. They are no longer operative. They functionally do not exist today. Striking husband and wife from state statutes is thus superfluous to the supreme judicial activism we have already experienced.

This is my congresswoman. She is in office because her husband died and she assumed his position. I think it’s very ironic that Mrs. Capps now wants to eliminate terms she used 16 years ago to become a congresswoman.

She has done very little for my area and is soon to retire and this will be her legacy.

I do not agree with her. I am disgusted that she wants to do this.