Two defeats for BDS after a victory at the United Church of Christ. 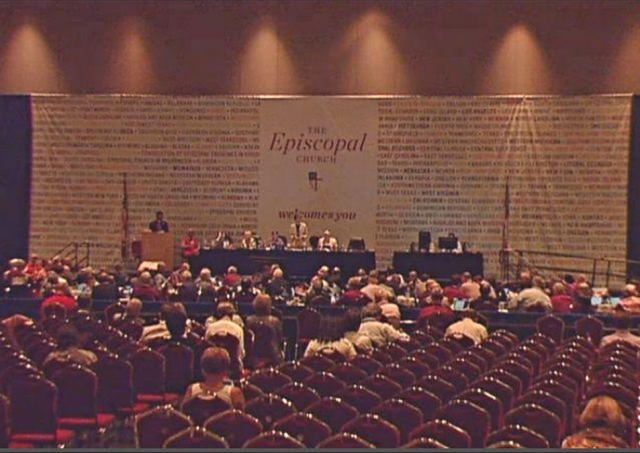 After the United Church of Christ passed an Israel divestment resolution on June 30, 2015, there was concern that the Boycott, Divestment and Sanctions movement might score three victories at church annual meetings this week.

But that did not happen. The Mennonite Church USA tabled the divestment resolution, and the Episcopal Church House of Bishops voted it down overwhelmingly on a voice vote (I listened, and there were almost zero people shouting “yes” and a loud chorus of “No”).

AP reported on the Mennonite vote:

A leading Mennonite group has delayed a decision on divesting from companies with business tied to Israel’s occupation of the Palestinian territories.

The Mennonite Church USA was set to vote this week on whether they should sell off stock in companies “known to be profiting from the occupation” and from “destruction of life and property” in the territories. A church spokeswoman said delegates at a national meeting in Kansas City, Missouri, voted 418-336 to table the resolution until their next assembly two years from now. Twenty-eight delegates abstained.

Here are tweets reflecting the Episcopal vote on this resolution (D016):

D016 calling for a no buy list in the Holy Land is getting hammered by the House of Bishops. #gc78 #ifnotnowwhen

@LegInsurrection @EpiscopalRI Yes, only one. Even CoE has divested from occupation, plus PCUSA, Methodists, UCC (this week, 80% vote). #GC78

These defeats will be used against divestment resolutions at other churches, such as at the United Methodist Church which passed divestment from a single company that provides prison services worldwide (including in the U.S. and Israel) but has not had a church-wide divestment:

It's official: for #gc2016 to pursue anti- #Israel divestment would put #umc 2 Far Left of not only liberal Democrats but Episcopal Church

Bless them – for when we have treason like this on parade..(see below)….

NEWS FLASH: Dateline Jakarta – “….and the Indonesians promptly donned “Daisy Dukes” and brandished the Confederate Battle Flag to show what they thought of it…”

William — where can we watch a video of the voice vote? Also, what does “gc” mean? I see that in many of the tweets.

Nothing the modern UMC might do would surprise me. I was raised in the Methodist Church, but the leftist drift of UMC was a factor in me leaving.

Also, while the Episcopal Bishops defeated this BDS resolution, they adopted one embracing gay marriage.

Before the House of Bishops voted I wrote an email to my rector making sure that he was aware of the anti-Semitism vote and the gay-marriage vote.

He wrote back that he was strongly pro-Israel and also very aware of the liberal ethos within the church.

I had suggested that these matters be taken before our vestry and be discussed at length. I also mentioned that our church, like many others, should pull itself out of ECUSA immediately because of its liberal positions. (Our property’s mortgage is also paid so we are free from debt.)

The Episcopal/Anglican Church I had previously attended had left ECUSA. That church was a rapidly growing community near Wheaton College. We met in a high school auditorium; a large number of Wheaton College students attended. That church left ECUSA and joined a newly created diocese that was opposed to the practice of homosexuality.

I have noticed that any church group that embraces homosexuality under the rubric of ”embracing diversity” also begins to embrace anti-Semitism. The reason for this is, I believe, is that while some homosexuals want the pretense of a spiritual life so they attend an ‘embracing’ church, they, in their conscience, realize that the true G-D does not embrace homosexuality.

These will attend liberal churches to listen to liberal interpreters who will deny miracles, who will deny the historical resurrection, who will deny final judgment, and categorically deny what was actually written in the Scriptures. Such leaders will parse Scripture to make Scripture mean what they want it to mean. They do great harm to the flock the have corralled. They see themselves as modernity’s answer to ancient text.

Therefore, anything to do with the true G-D, his people and the true followers of Christ are rejected as ananthema. Ancient and enduring Truth is rejected for pop culture’s synthetic ‘truth’, ‘truth’ as endorsed by the SCOTUS’ despotic decision.