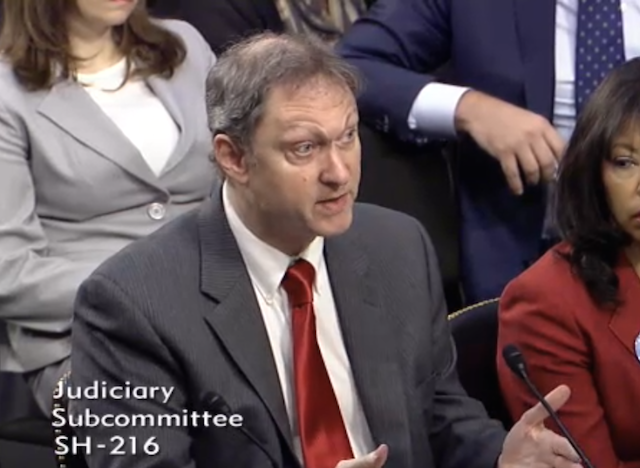 Dr. John R. Lott Jr., who runs the Crime Prevention Research Center (CPRC), today released yet another of the Center’s outstanding reports, entitled: “Concealed Carry Permit Holders Across the US”. (The full report is embedded at the bottom of this post.)

The report’s biggest takeaway was the continued acceleration of concealed carry licensing across the country. Those familiar with Dr. Lott’s seminal book “More Guns Less Crime” will not be surprised to learn that murder rates in the United States continue to plummet even as concealed carry continues to skyrocket: 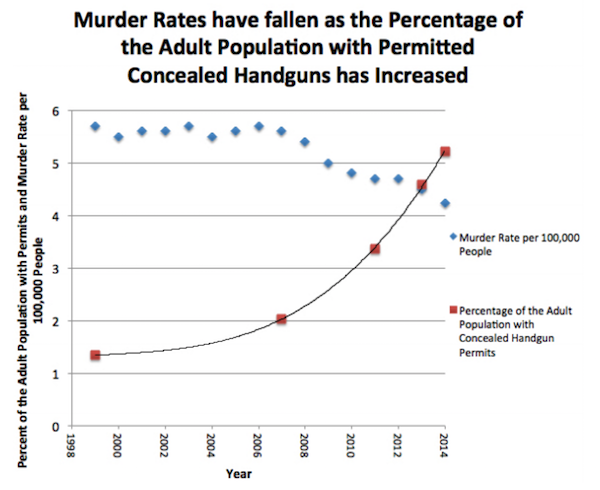 The report revealed a change in demographics behind this ongoing acceleration of concealed carry licensing.

In Texas, for example, the single most rapidly growing demographic in terms of concealed carry licensing is, wait for it:  black women, followed closely by Asian women. Good for them. 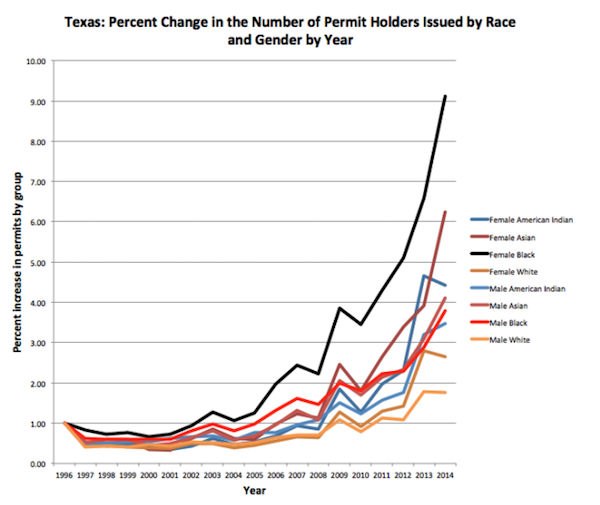 Overall, the number of concealed handgun permits has grown to nearly 13 million, and has seen a nearly 1.7 million permit (more than 15%) increase in the last year alone.

Those are just highlights from the report, and of course I urge you to read the whole thing.  As promised, here’s the report in full:

Armed robbery of convenience stores in Houston, Texas in the last 48 hours…

Emily Post would be greatly pleased at this “civility” enforcer.

Was it the same clerk? Could be a hat-trick…

What are those crazy gun nuts thinking!? 😉

At a price range of three to eight hundred dollars for a quality handgun, (plus ammo and training)this falls in to the price range of any other home appliance such as a smart TV, a laptop, washer/dryer, stove or refrigerator. None of which can serve as a suitable, portable, reasonably priced insurance policy for you, your family and others who may be with you at a moment of danger not of your choosing. Even the MSM is being forced to cover more and more successful uses of firearms by armed civilians. Those numbers far exceed the the use of firearms by commissioned police officer. Many incidents are not reported because the civilian will frequently walk away with a “no harm, no foul” attitude. Parents should be encouraged to teach their children that firearms are tools like sharp kitchen knives and hot stoves. Treat firearms with respect and knowledge and they are not as dangerous as the liberals would have you believe.

Firearms last many decades and are (usually) easily repaired. Those other household items?

“Those numbers far exceed the the [sic] use of firearms by commissioned police officer.”

Of course they do.

Plus, criminals don’t usually go around threatening, attacking, or robbing police officers, or engaging in any overtly criminal activity if they know police officers are in the area.

Even the MSM is being forced to cover more and more successful uses of firearms by armed civilians.

It’s worse than that: the MSM even has to cover the successful use of firearms by former CNN anchors.

When Texas first instituted concealed carry it was because car jackings were out of control. as soon as people started carrying, car jackings went to ZERO.

Although the coincidence of declining crime rates and the increase in both the number of firearms in civilian possession and the number of concealed carry permit holders does not prove “more guns equals less crime,” it does disprove the anti-gun claim “more guns equals more crime.” If there is no causal link between the number of guns and the amount of crime, the former proposition would be unprovable, but the latter would still be demonstrably untrue.

Right. Anti-CCW people frequently tell us, “Correlation does not equal causation,” but they always leave off the rest of the statement: “… but you CANNOT have causation without correlation.”

Texas law was changed a few years back to where anyone able to own a handgun is legal to keep the handgun in the car. Some of my clients chose to not renew their concealed carry license because of that.

Surely you are familiar with Suzanna Gratia Hupp and the incident in Luby’s Cafeteria in 1991? That was when Texans who could legally own a firearm were REQUIRED to leave the firearm in their car when they left their car. So when she was in Luby’s cafeteria, and a “crazed gunman” shot many people in the cafeteria, including her father, and when her mother was cradling her dying husband in her arms, he shot her too. After that incident, Texas passed a “shall issue” concealed carry law. Anybody who chooses to go defenseless is a fool.

When the Missouri legislature finally passed CCW in 2004, they combined two bills, one of which allowed it in vehicles without a permit.

It was speculated that this was why the expected biblical proportion flood of permit applications were merely of the 100 year intensity.

Huh? Would you mind clarifying your point? Thanks.

This is what he is referring to:
When Wisconsin legalized CCW in … 2011? … they had over 100,000 permits issued in something like 4 months. The demand (ie – applications) was just that high.
In the same year (roughly 7 years after MO passed CCW) Missouri only had something like 125,000 total CCW permits issued.

(The above numbers are solely from memory, but the gist of it is correct; I was struck by the disparity at the time.)

But when MO passed the CCW law, they included a clause that allowed ANYONE over the age of 21 to carry a concealable weapon in their car, no permit required. That ability freely granted to everyone drove down the demand for CCW permits in MO, and they had a lower number of permit applications than expected, because that clause made it so many who otherwise would have applied for a permit (ie- they just wanted the permit so they could have a gun in the glove box) didn’t need a permit to carry a gun in their car.

Before any nay-sayers come in to comment on it, the “downward turn” in the rates of “male white”, “female white”, and “male Native American” CCW numbers in Texas is not actually a “downturn”.

The graph is looking at a “percentage increase”, so anything above 0% shows an increase in the overall number of issued permits. The rate at which it’s increasing may have declined, but it’s still increasing.

It just highlights how dramatic the increase in the “female black” and “female Asian” numbers are (and gets them to fit more nicely on one graph).

I hate to be the one to ask this, but how many of those black women are straw buying for their thug bfs?

I’ve seen it happen with my own eyes in Indy. Tiny little petite gal and a huge thug bf. He points out a huge semi-auto handgun that she can barely lift, he nods, she pulls out a was of C-notes and fills out the 4473

Never mind. Even though the article mentioned conceal carry permits several times, that recollection got stuck in me head.

That has nothing to do with CCW permits. If a man can’t legally buy a gun, he can’t get a permit to carry one.

I don’t mind at all that they “dramatically underestimate” me.

Contrary to what Hollyweed has often portrayed in the western movies and on television, firearms were not used that often. This was due to the fact that firearms were carried by almost everyone openly and concealed. In fact, the lawless element in modern times are more likely to use a firearm in the commission of a felony than their counterparts in the old west. Sure there were shootings, but most of these were between law enforcement and the criminal element i.e. the shootout at the OK Corral in Tombstone Arizona.

Looks like somebody printed a webpage to adobe while using firefox. The adobe print plugin for firefox has been defective for many years now. Use pdfFactory Pro instead.

What is the evidence of this problem? Are you referring to the download of the report? I use FireFox, downloaded and viewed the report w/o problem.

Yeah, I’m not seeing any problem either.

Damn… pretty soon Branca’s gonna be out of a job. (And have absolutely no problem with that).

I hear people talk about retirement, I’m like, WTF is THAT? Closest I can imagine something called “retirement” is integrating more motorcycle riding into my current job.

THAT would be AWESOME. 🙂

We used to have a mobile dog groomer who made house calls on her Harley. She retired to Key West a few years back, though. How are you with dogs? 😉

I much prefer to KNOW people who have one, than to have one MYSELF. 🙂

For 20 years I’ve been saying, “I’ll never retire! I’ve been working since I was 15! They’ll carry me off the job site on a stretcher!” among other oft-repeated ‘Dad sermons’ as I’m told my kids call them (I have an informant on the inside). About three years ago I sold off 90% of my business and went into semi-retirement, keeping one small office for myself. I’ve been at the office 40 hrs a week, but only working about 10-15 of those hours. (Do NOT tell Mrs. Hawkins). This is how I began following Legal Insurrection – for the first time I had plenty of f**k-off time at ‘work’, and got into following political blogs.

What I’m getting at is that the closer I get to full retirement age (I’m 59), the less I rant the “I’ll never retire!” sermon. I guess it’s not about ending work – it’s about keeping on doing something after the official career is over, something we love, ideally. You’ve got motorcycles and travel (a redundancy) waiting, and more. My thing has been 50 years of playing anything with strings on it: guitars, mandolins, banjos, mountain dulcimers, diddley bows, etc., but one indignity of aging has sufficiently stiffened my hands to the point where I can barely play anymore. I’m a thumb-strummer and hummer now. One door closes…

And another opens. For 3 years or so I’ve been making instruments in my little home shop – 3 or 4 string cigar box style guitars and 1 string diddley bows. The basic overall theme is ‘southern American folk & blues instruments’, but with a twist – as a lifelong blues rocker, my ‘signature’ difference from other builders is that I fully electrify every one, with onboard pre-amps and all the gig-ready goodies. Set the amp to 11, hit that first lick, break windows, kill the cat.

Interesting that the group with the largest increase is Black Females.

Black crime IS a problem and the folks who know it best are those it’s happening to.

The mainly white press can ignore it or try to hide it but the facts are it exists and ignoring it or hiding from it doesn’t solve it so it gets worse.

The press has a lot of bad karma coming it’s way.

Exactly. Black women are two to three times more likely to be the victims of violent crime than white women are, and domestic violence is actually among the leading causes of death for black women ages 15 to 35. Talk about a #WarOnWomen!

The media can’t be bothered reporting on black-on-black crime; Obama doesn’t lionize black victims if they’ve had the all-too-common misfortune to have been victimized by a fellow black person; the #BlackLivesMatter mob are strangely silent on the subject.

But, as you point out, those at risk of these kinds of crimes know exactly what’s what. And in Texas, at least, they’re coming to the realization that they don’t have to just sit back and helplessly accept victim status. Good for them.