Branco Cartoon – All The News

Branco Cartoon – All The News 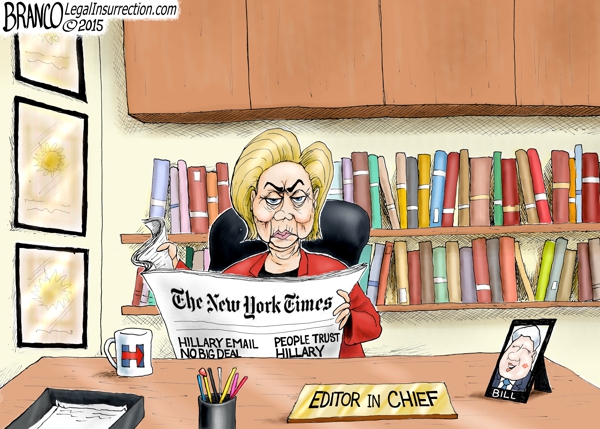 A picture of Bill? Maybe on a dart board.

You can be sure the kiss on his check isn’t from Hillary.

Who, BTW, is giving Branco’s wrinkle pen a good workout.

Check? Well, you can be sure the kiss on the checks are from Hillary.

They didn’t get the New York Times to say that. In fact nothing even close to that.

The claim that there was a criminal referral actually was a mistake, but through careful public relations, including having Congressman Elijah Cummings ask just the right the question of the State Department Inspector General, and then go public beforer Hillary, saying it involved only a few e-mails, and they hadn’t been marked classified (like as if that was a possibility) they tried to make it look like it was nothing at all.

It was a referral to the FBI for counterintelligence purposes because there was a possible compromise of classified national security information.

This was confidentially told to the House committee last Thursday, and then the Justice Department publicly referred to it – as a criminal referral.

Notice Hillary at no point blamed DOJ for this!! That would have clarified things too much.

Now some high level officials (specifically at DOJ in the Wall Street Journal, probably at DOJ in the New York Times, which was more vague) confirmed on Friday or maybe even late Thursday that there was a criminal referral.

Hillary Clinton or her lawyers pushed back, and got DOJ to retract, and go silent, and then got the Inspector Generals (it was the intelligence committee Inspector General who made the referral, but he couldn’t do even the limited investigation he did without the help of the State Department Inspector General – something like that) to issue a public statement saying that this was actually a counterintelligence referral.

Which is actually NOT nothing at all.

The fault is not with the New York Times, except for a possible over-correction, because the Department of Justice may indeed be considering also starting a criminal investigation, as a result of tehhe referral, even though the referral itself mentioned nothing about a possible crime.

It hasn’t actually begun one, according to sources at DOJ, but then there’s always a preliminary stage.

This all means that there is probably an investigation going on, already though. (the referral probably hapened a while ago – it’s just that the comittee got notified the other day, and that started the reveraktion even though the committee itself didn’t leak it)

What it is, at a minimum, is that the FBI (which handles counterintelligence) is now, at last, trying to determine every possible leak or penetration that might have come about because Hillary Clinton was using a separate e-mail system to transmit information that included information that came from or was derived from intelligence sources.

It is real neglect if this wasn’t done before.

This is all besides the possibility – really the probability – that Hillary Clinton wrote or forwarded things that were secret to people outside the government or even inside but not entitled to recieve that classified information.

But because all that they have is e-mail that Hillary Clinton sent or received to or from state.gov addresses, plus some addresses on her server by her aides, or those emails that were turned up in probably reverse engineered searches for a few search terms, like Benghazi or Libya (which did not search through attachments, by the way, nobody would know anything about that from the evidence they have.

It’ll be a long time till the FBI gets to look at much of the actual e-mail, because, you know, it’s possibly classified, so they won’t be able to really spot any kind of pattern of Hillary Clinton revealing information, in whatever examples of it might be left, buried in all the data.

The New York Times hasn’t remotely run anything like that.

But many, essentially, struck the same theme, depicting Mrs. Clinton as untrustworthy, an image that even Democrats supporting the Clinton campaign acknowledge is a weakness. About 57 percent of Americans do not believe Mrs. Clinton is honest and trustworthy, according to a CNN poll released June 2…

…Mrs. Clinton’s allies point to relatively low trust numbers for Mr. Clinton in the 1992 and 1996 elections and his ability to win voters despite his personal failings.

What the New York Times hass written, citing the Hillary Clinton campaign, well, they didn’t trust Bill Clinton either, and he got elected.

Ah, now we can see the one ‘device’ that Hillary can handle.