Boston Breaks Up with 2024 Olympic Bid

Boston Breaks Up with 2024 Olympic Bid

PUN ALERT: Will LA pick up the torch? 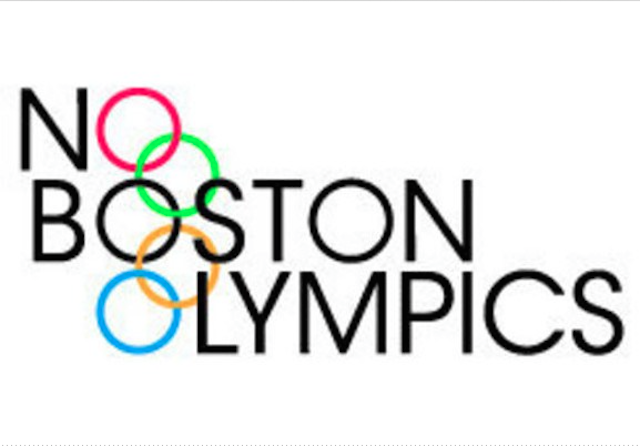 Today Boston city officials announced that they have reached a mutual understanding with the United States Olympic Committee, and will be withdrawing Boston’s bid to host the 2024 Summer Olympics. The contract fell through after city officials refused to commit taxpayer dollars to cover any shortfalls encountered by local Olympic organizers. More from the Boston Globe:

The Boston bid has been in peril for months, due to a string of controversies and low poll numbers.

“Notwithstanding the promise of the original vision for the bid, and the soundness of the plan developed under Steve Pagliuca, we have not been able to get a majority of the citizens of Boston to support hosting the 2024 Olympic and Paralympic Games,” [USOC Chairman Scott] Blackmun said. “Therefore, the USOC does not think that the level of support enjoyed by Boston’s bid would allow it to prevail over great bids from Paris, Rome, Hamburg, Budapest or Toronto.”

James E. Rooney, chief executive of the Greater Boston Chamber of Commerce, said in a statement that “while hosting the Olympic Games could have been an exciting opportunity for Boston, I believe Mayor Walsh and Governor Baker were right to be cautious about assuming too much taxpayer risk.”

USOC members chose Boston in January as the US bid city for the 2024 Games, over Washington, D.C., San Francisco and LA.

Boston Mayor Randy Walsh took to Facebook to offer an explanation for why the city’s bid fell apart: 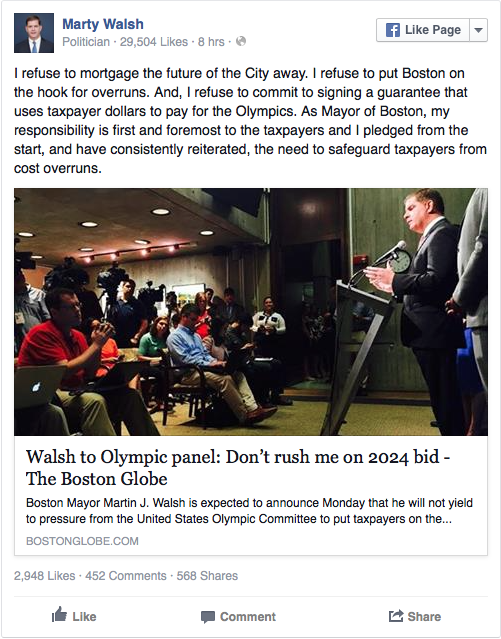 The US Olympic Committee responded, citing concerns over a lack of popular support for Boston’s bid:

Here's the official statement from the USOC on ending the #Boston2024 Olympic bid. pic.twitter.com/V2lSxxyqPI

Concerns about waning public support for the games weren’t overblown; enthusiasm tanked after the initial bid was submitted, and hasn’t seen the right side of 50% since January. Via USA Today:

A poll conducted by a local radio station, WBUR, in January put support of the Games at 51%. That same poll reached a low of 36% in March and hasn’t been above 40% support since. In WBUR’s most recent poll, opposition to the bid had reached a high of 53%.

Groups such as No Boston Olympics and No Boston 2024 have used social media and public forums to rally support against the bid. They argue that the Olympics’ would leave taxpayers on the hook for large cost overruns and pull resources and political attention away from more vital issues, including the city’s infrastructure which they argue not currently equipped to handle the Games.

“This was really a grassroots effort,” said Chris Dempsey, co-chair of No Boston Olympics, in a press conference Monday afternoon. “It started in a living room in Boston in November of 2013, and we’ve been working since then to balance the debate. Our hope was always to just be a voice for people in Massachusetts that were skeptical of this bid and had some real questions about it, and we hope that we were successful in that.”

Asked if the opposition played a role in the announcement, Walsh said, “Not at all. The opposition for the most part are about 10 people on Twitter and a couple people out there who are constantly feeding the drumbeat. This is about the taxpayers of Boston and what I have to do as mayor.”

In January, The USOC chose Boston over Los Angeles, Washington, D.C., and San Francisco as its prime candidate for a US-hosted games. Now, the pressure is on Los Angeles city officials to renew their bid, or risk losing the summer games to Rome, Paris, Hamburg, or Budapest.

Let’s take it to the comments—would you support a bid from your city? As a DC resident, I think I’d rather move than even entertain the thought!

The federal government will soon be giving grants to mismanaged cities like Chicago, Detroit, or Baltimore for Olympic bids with a promise that it will result in economic recovery and stimulus, but the projects will all fail and the money will be wasted.

I don’t know why any city would want this. So long as there are plenty of suckers who actually want it, let them have it.

The first sane financial decision by the City of Boston in at least half a century.

Just Say No!… to the IOC and the Olympics. The IOC isn’t happy unless the taxpayers foot the bill (they despise private funding) and they are utterly corrupt. Let them find some third world country stupid enough to give in to their demands.

Boston is right to withdraw the bid. As far as I’m aware, the only Olympics in recent decades to pay mostly for itself rather than rape and pillage the taxpayers was the L.A. Olympics in 1984. I was living there – it literally was like a utopia those 2 weeks (plus tons of people left town expecting 1 massive traffic jam). Peter Ueberroth did an outstanding job, and I suspect lefties everywhere will never allow that to happen again. I’m no fan of the Olympics, anymore – it’s just a power trip for a few people and a money pit for everyone else. The IOC is as corrupt and criminal as the U.N.

And probably as corrupt as the E.U.