Greece is in trouble, and it’s going to take a lot more than a short-term fix to repair what anti-austerity measures broke.

The IMF released new numbers this week showing that it will take Greece three years and 50 billion euros just to stabilize its volatile and quickly failing economy. The organization also downgraded Greece’s projected economic growth from 2.5% to 0%, and renewed its call for Greece to agree to an extended debt repayment plan coupled with lower interest rates.

Greece’s banks have now been closed to all but pensioners for four days, and Athenians have settled into a crisis routine.

At the stroke of midnight, queues form at cash machines as locals scramble to obtain their daily €60 ration.

Neighbours confer over which ATMs are still dispensing €20 bills – those with other denominations can only pay out €50 per day.

But despite the posters that adorn every tree and lamppost calling for “everyone to take to the streets”, the large protests of the past few days have largely died down.

In the radical left Exarcheia neighbourhood, exhausted young anarchists lounge outside bars and cafes, and let the banners hanging across the central square speak for them.

At the beginning of this week, Greek citizens were driven into a panic after officials imposed economic controls that drastically reduced access to private funds from bank and pension accounts.

Then, on Tuesday, Greece went into arrears on its multibillion euro IMF loan; negotiations between Greek Prime Minister Alexis Tsipras and other European leaders broke down after Tsipras announced a surprise referendum to give Greeks the opportunity to decide whether or not leadership will agree to a new proposal offered by Greece’s creditors. Protests have calmed, but advocates on both sides of the issue are running a full court press in the run up to the vote.

Interesting cultural note: the instability in Greece has led Europeans to invest more heavily in alternative currencies like Bitcoin. Bitcoin value is volatile, which should tell you a lot about the economic mood in the Eurozone right now.

The BBC posted a helpful chart showing who owns Greek debt, and how much: 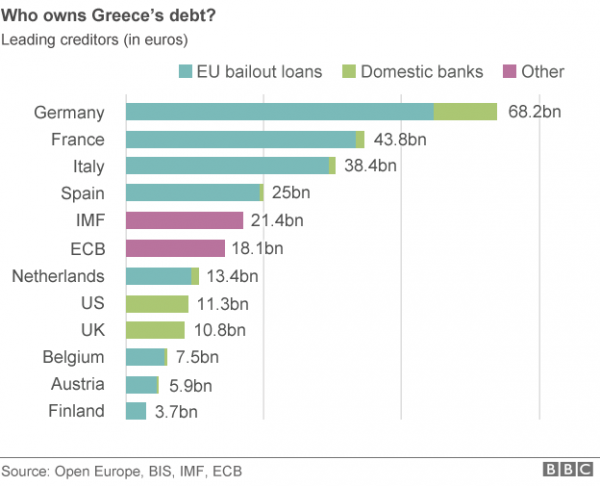 Still, from a global perspective, what happens in Greece over the next few weeks is a drop in the pan compared to the effect that larger markets can have on the global economy. From Bloomberg:

Still, the closed nature of China’s financial markets is allowing the rest of the world to watch in wonder without seeing spillovers into their markets…yet.

“What happens in China will turn out to be far more consequential than any sting that Greece may deliver over the coming weeks or months,” said Frederic Neumann, co-head of Asian economic research at HSBC Holdings Plc in Hong Kong. “As China’s equity markets lose their roar, the risk is that demand more broadly on the Mainland could take a hit. That would knock out an essential engine of world demand over the past decade. As dramatic as events in Greece currently appear, however, ultimately, it’s difficult to see these proving decisive for the world economy.”

Greece is set to vote on the referendum this Sunday. We’ll keep you updated on the economic situation across the pond.

No doubt our black messiah looks at these pics of anxious citizens queued up with awe and contemplates the day the same will happen in the US, thanks in large part to his policies.

No doubt, talk about a crisis that would not go to waste.

Nothing would make him happier.

Based on my (admittedly limited in sample size) experience representing and opposing cultural Greeks, they will dig in their heels and resist anything like a reality-based solution.

OPA! Nobody, and I mean nobody, saw this coming! (wink, wink)

Greece is going down in a flaming ball of cheese! The Greek PM just like our PS (Prime Suspect) Obama blames the “conservative system” for all of Greece’s failure to meet its commitments. What a pansy! Boo Hoo!

Who needs ISIS when Greece, Spain, Portugal, France-the totality of the West-can destroy itself from within just by voting for idiots and appointing people into positions of power who have no business (or moral rectitude or moral courage) for being there? I don’t need to name names on this website.

Massive losses of wealth and capital are not good anywhere they occur. Greece, China, the United States, October, 1929, the United States in the period after the GM and Chrysler bankruptcies when Obama turned the salvageable assets over to the UAW for conversion into Viagra and stained bedsheets.

Bitterlyclinging – the wealth was wasted away by the Greeks as the took loans and wasted the money pandering for votes. The money is gone and now the creditors have written their losses off and determined not to pour more money down the sewer.

Let them go bankrupt as a lesson to creditors who extend loans to socialists, and let the Greeks realize that no more handouts are forthcoming.

A dizzying three-week plunge in Chinese equities has wiped out $2.36 trillion in market value …
As dramatic as events in Greece currently appear, however, ultimately, it’s difficult to see these proving decisive for the world economy

They don’t mention that Chinese equities have still more than doubled since Obama took office. And US equities have tripled since then. That’s something like $15T just for US stock markets.

All that funny money makes Obama look good, and makes people feel rich enough to spend, IF they are stockholders. But median income and net worth are down over the same period, and US interest rates incredibly have been zero, stealing from the responsible savers, subsidizing debt.

A real economy is founded on broad based production done by a fully employed citizenry, not a welfare state and financial gains from a global stock market bubble, mountains of DEBT, and financial leverage chicanery.

Our “too big to fail or jail” leaders keep us subsidizing corruption, leverage and debt, just like Greece. We still have military strength and can print world reserve currency, but we don’t have austerity here either.

The bubble needs to be pricked before 2016 elections, but hard to say if Greece is a big enough shock to do it. Too many leveraged traders leaning the same way could capsize the casino boat quickly with the right rogue wave.

The BBC chart shows how the debt is distributed among the lenders currently. It was much different a few years ago. A few years ago most of the risk of loss was with the private banks. Now the statists in the Troika have transferred the risk to the taxpayers. David Stockman has a good piece on it.

Stockman makes the error of viewing this all as an economics problem, rather than a political one. But this is like treating a house fire as a matter of thermodynamics, while ignoring the effect of a whole department’s worth of fire engines parked outside.

As an economic problem, he’s right; Europe has handled it poorly (although he’s not justified in implying that anything Greece has done counts as handling it well). And on the way, he gets to indulge in a bit of schoolboy Marxism (You mean, somebody somewhere is making some profit off this? Those bastards!)

But seen as a political problem, the European actions are logical and even prescient steps. The long-range goal was obviously to avoid street-level financial panic and runs which might kill some otherwise perfectly functional banks in Germany, France, Italy, Spain, etc, leaving considerable messes to be cleaned up. Shifting the burden away from relatively vulnerable European banks onto the vaults of a much larger entity—specifically, the IMF—seems a sound tactic, so long as the directors of the IMF are willing to go (or can be conned into going) along with it.

As dramatic as events in Greece currently appear, however, ultimately, it’s difficult to see these proving decisive for the world economy.

The BBC graph shows just how separated these two zones are. The lighter green areas show how much damage Greek default on some loans could cause commercial banks and individual or corporate bondholders. Lots in the US and UK, but very little in eurozone countries. In other words, the European program of shifting debt away from these bondholders onto large political organizations (EU, IMF, or ECB) is almost complete. Total Greek collapse or default will not cause any European banks (excepting those in Greece itself and maybe the UK) any grievous harm. And that means that Greek failure is not the menace it was only a few years ago.

Of course German banks seem to be exposed a bit more than they would like. Perhaps this is why Merkel is still making noises about being willing to talk. On the other hand, Greece isn’t really important to the debt transfer process. As it stands, the EU gives Greece money, most of which immediately goes back to Europe (although not to the same institutions it came from, of course). Greece is merely a convenient column in the accounting ledgers, as in the final result bailout money is paid by the EU to holders of risky Greek bonds. But it should be no major feat to cut Greece out of that process altogether.

The Greeks spent, but did not tax. Their creditors lent beyond their ability to repay. I’m sure there is a lesson here. This is a bipartite… No, a multipartite problem.