Could we have prevented ISIS? 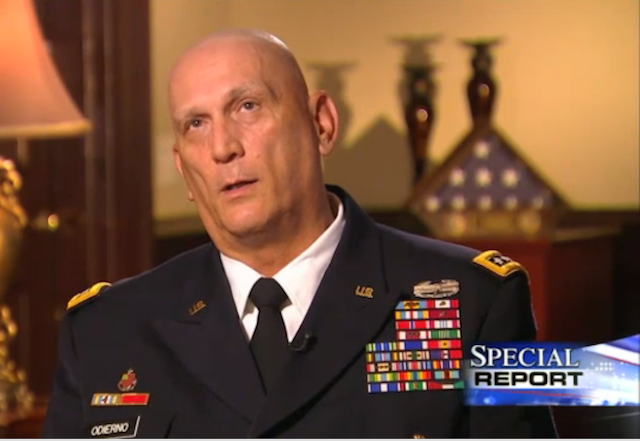 The withdrawal of U.S. troops from Iraq, which began in 2010, remains one of Obama’s more controversial foreign policy orders to date. The war wasn’t popular, but then again, neither was the idea of letting go of a country we fought so hard to clean out and control before that country was ready to stand on its own two feet. Still, Obama persisted, and the rest is history: large parts of Iraq crumbled, and the chaos gave rise to the Islamic State’s brutal, terrifying brand of terrorism.

Outgoing Army Chief of Staff Ray Odierno spent more time in Iraq than any other U.S. General; he was an architect of the Surge, and spent half his time overseas as a top commander—and he says the chaos we’re seeing today could have been prevented if only the Administration had agreed to follow recommendations regarding the pace of troop withdrawals, saying, “If we had stayed a little more engaged, I think maybe it might have been prevented… I’ve always believed the United States played the role of honest broker between all the groups and when we pulled ourselves out, we lost that role.”

“I think it would have been good for us to stay,” Odierno said, when asked if it was a mistake to pull out.

Further, when ISIS took over large portions of Iraq last year including its second-largest city, Mosul, the White House apparently didn’t reach out to the Army officer who had spent more time commanding U.S. forces than anyone else.

“All my work was given to [Joint Chiefs] Chairman [Martin] Dempsey,” Odiernio said. “I never talked directly to the president about it at that time, but I talked to the secretary of defense and I’m sure he relayed all of my thoughts,” he added.

Odierno’s concerns stem from our decreasing ability to deter threats not just in Iraq, but from other bad actors like Russia and Iran. Invoking history, he describes how hindsight shows a marked decline in stability in Europe—something no American would ever have expected just a few short years ago. With Russia reasserting itself, and a belligerent Iran running all but free from the fear of international criticism, Odierno believes that it is “naive” for Americans to sit back and believe this decline will fix itself.

The outgoing Chief is no stranger to criticism. In the wake of the Chattanooga shootings, Odierno spoke out to temper expectations about changes in military policy regarding armed soldiers on base:

Current Army chief of staff Gen. Raymond Odierno – the man who Milley would replace if he is confirmed — told Fox News the Army is considering allowing recruiters to carry weapons.

“When it comes to recruiting stations, we are looking at it now — what are we doing now to best protect them,” Odierno said. “We will look at every avenue — arming them, there is some authority issues with that so we have to look all the way through that.”

Odierno did, however, say he has “a problem with” soldiers at “all installations” being armed.

He also supports the Iran nuclear deal—at least in theory; but while his positions have not been perfect, you have to wonder how the past few years look from his perspective.

Obama has a history of ignoring the advice of those more experienced than himself. On a domestic level, this has affected our health care, our ability to do business, and our freedom to live life as far away from the long arm of government as possible. Overseas, it has led to the undoing of years of service, and the rise of militant extremism. ISIS has spread out of Iraq and Syria, and into Egypt, greater Africa, Kashmir in India, Pakistan, and even Europe and the United States. It’s a development that can’t possibly be real, yet we sit and watch it on the news.

I think it’s important that we listen and reflect on Odierno’s words in the coming weeks. His criticisms aren’t vague; when Obama is finally forced to answer for what his policies have wrought, I fear that everything Odierno has said here will be proven 100% true.

RE: “Could we have prevented ISIS?”
You betcha!

People keep saying that if we would have left more troops in Iraq that we could have stopped ISIS.

Why? Obama was still president. Even if he decided to follow this one recommendation, it is quite obvious he would not have followed all the recommendations that would have been required to defeat ISIS early on (the JV team).

Obama’s bad decision to withdraw doesn’t mean we would have won, there would have been many more decisions after that which he would get wrong, costing soldiers lives and limbs.

While it was a horrible decision for the Iraqis living in that area, For soldiers serving under Obama, the best thing he did was to withdraw them.

How was this guy overlooked in Obama’s purge?

What was needed to prevent ISIS was to intervene in Syria.

Not leaving troops in Iraq, allowed ISIS to make massive territorial gains in Iraq in the spring of 2014, but it already existed.

Maybe not toppling Libya and pouring arms into Syria would made an impact?

I should say intervene in Syria, CORRECTLY.

Woulda, shoulda, coulda are poison. Under Obama and a nation that is now ruled by a demoralizing and demonic Administrative State (I mean demonic per the definition in Job) and a corrupted national Senate and major political organizations. The people in an arguable majority think that vices are great courageous virtues and chase prudent gossip as “entertainment”. The old generation retires to age-restricted vacationlands, absent much real interaction with the young.

That is the part of the old generation who worked for pensions and trained themselves over 40 years never to object to malevolent social policy changes by those like Obama the great divider, whose every social policy is designed to inflame and irritate, to demoralize the good and confound the young and feeble. Never to object, for going along forever and avoiding risks are ever the ethos of the pension seeker. The other part of the old generation struggles to stay healthy in low wage jobs, and downsized housing, struggling to pay all bills — and the biggest bill, payable by most is decent healthcare. That’s fine with the malevolent ultra-socialist Health Care Experts because hey — as Obama’s mentor Ayers once planned with his fellow cadre persons in the Weathermen of the Prairie Fire days, just like in China’s Great Leap Forward under the worst of Mao, TWO generations have to be eliminated, so the young are have no memory of the past, and will be more bold in the NEW!

Odierno is a great man, and a great soldier. But is he too his caught in the very cohort of Federal worker professional pension seekers? Those for whom in the end you put in your time for that pension, and like Ike, retire to a beautiful place near golf courses, no matter how hard your duty had been in that career. Ike took a chance though — he did not retire until he ran for office and served a higher duty. Still, after that what?

Some praise ex-generals and ex-presidents for keeping out of the limelight, for retiring … fading away. That is wrong. The real battle front is home. The next generations. the CURRENT generation. The elders must be heard and find ways to get through. Otherwise, ISIS.

ISIS is a outcome of generations of confused youth. A growth out of that compost.

Humans are not meant to be mere compost for gardeners of poison vines. But is the elders leave the scene for vacationland when they finally have a chance to operate freely according the the wisdom the culture has paid so much to instill in them over a long and prestigious career we’ll have our own growth of some malevolence like an ISIS.

Isn’t this the same guy that said it wasn’t a good idea for our U.S. stationed military to carry weapons on base and/or at their duty stations? Pretty sure it was

I’ m sure this Einstein also had something to do with this:
http://libertynews.com/2015/07/breaking-us-army-issues-policy-letter-describing-patriots-guarding-recruitment-centers-as-security-threat/?utm_source=dlvr.it&utm_medium=twitter

We don’t have Military Leadership anymore in America. They’re Politicians, some entirely Political Hacks with a military background. To them, PC Politics come first

Obama has a history of ignoring the advice of those more experienced than himself.

Of course he does. “Smartest man in the room,” remember?

Too bad he lacks the common sense and life experience to reason his way out of a paper bag. He hasn’t figured out how to “know what you don’t know,” I guess.