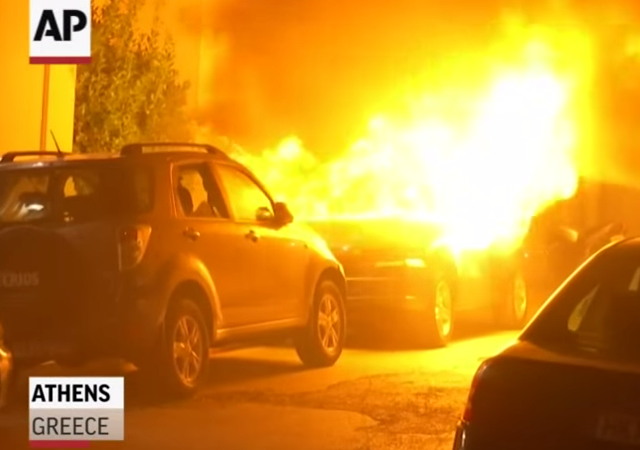 After a full month of drama, Greece and its creditors finally agreed on a multi-billion dollar bailout package. One of the bailout’s most controversial conditions is a list of new austerity measures, and we all know how many Greeks feel about those.

Anti-austerity violence broke out on the streets of Athens last night.

Tensions were high on Wednesday night outside the Greek parliament building on Athens’ Syntagma Square, which was the center of violent anti-austerity protests in years past.

And while the streets of Athens were largely calm for much of the day, despite thousands marching against austerity measures tied to the country’s new bailout agreement, the night took a more violent turn.

As night fell, clashes broke out between protesters waiting to hear the fate of their country’s economic future and the police sent to keep them calm.

The authorities responded with tear gas to disperse the crowd, as dozens of men and women, many dressed in black with their faces covered, came into the square wielding sticks and fire extinguishers to fight back.

Police say about 50 protesters were arrested during an hour-long clash outside parliament.

Prior to the clashes, riot police had packed the square as tensions ran high ahead of a planned midnight vote to determine the future of Greece by the country’s parliament.

This video from the Associated Press shows some of the aftermath of the rioting:

The News and Observer has more:

The bill, which imposes sweeping tax hikes and spending cuts, fueled anger in the governing Syriza party and led to a revolt against Tsipras, who has insisted the deal forged after a marathon weekend eurozone summit was the best he could do to prevent Greece from catastrophically crashing out of Europe’s joint currency…

The vote came after an anti-austerity demonstration by about 12,000 protesters outside parliament degenerated into violence as the debate was getting underway Wednesday night. Riot police battled youths who hurled petrol bombs for about an hour before the clashes died down.

I’ll leave you with these words of wisdom from Iowahawk:

Dear Greece: you can vote against austerity all you want. Austerity doesn't give a shit about election results.

Dictionary for socialists and marxists…
paying your loans and living within your means: draconian austerity.

Tsipras pretty much ran on the platform of telling the EU to piss up a rope, so is it any surprise Greek voters get pissed off?

It’s as if John Boehner campaigned to restore financial sanity to Washington, then bent over for the democrats at every opportunity… Oh, wait…

Attention, Greece: you may not be interested in austerity, but when you have no money, austerity is interested in you. I have $50,000 in real money and can probably get another $50,000 in credit card advances. Can I buy an island? Let me and my friends move there and set up a city-state. We’ll double your GDP in five years.

Unlike American cities ignited by the likes of Obama and Sharpton, no one from the government will come running to rebuild the Greek cities the Greeks themselves burn.

Sorry about the down tick, I was trying to hit the reply option.

I expect the Greeks are expecting the EU to come running with more money.