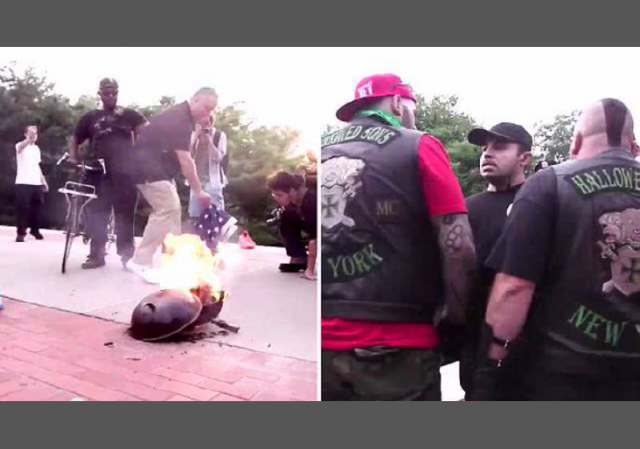 We wrote the other day of the “Burn the American Flags” Event to be held on July 1, 2015, in Brooklyn, NY, by a group called DisarmNYPD.

The event got a lot of attention from the media, as this image posted by the group behind the protest shows: 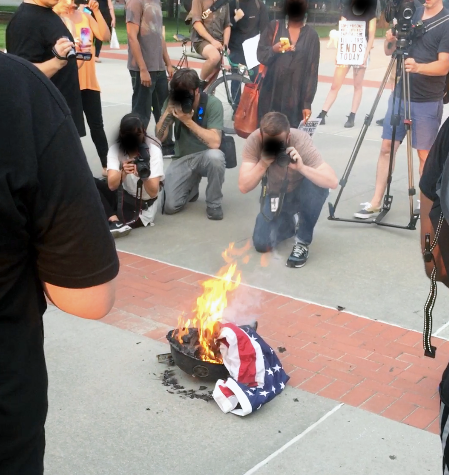 But there were counter-protesters — including people wearing biker jackets — who were none too pleased:

In the end, the police rescued the flag burners from the counter-protesters, an irony The NY Post captured as only the NY Post can: 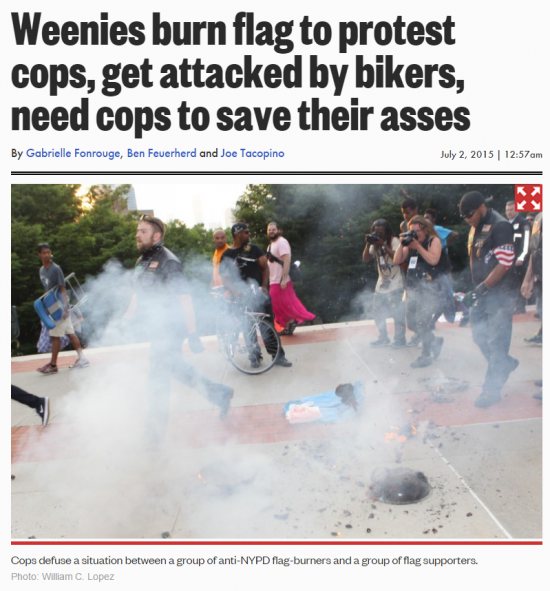 It was the counter-protesters calling for racial unity, not the flag burners:

The group sponsoring the flag burning issued a statement on Facebook, which reads in part:

The point we intended to make was proved twice over: Firstly, we did exactly what we said we would, and burned both racist flags, American and Confederate. Secondly, and most importantly, it was the police themselves who demonstrated the correspondence between the Stars and Stripes and the rebel flag of Dixie by openly aiding and abetting armed and violent racists as they attempted to attack our rally. After being given a plainly visible go-ahead from the NYPD, white supremacists with knives, bikers with hammers, and a motley assortment of various other extreme nationalists were turned loose like dogs. What occurred yesterday was the clearest display of the patriotism that we are determined to fight against. We can also confidently say that this reaction by the police and by the far right in America has shown without a shadow of a doubt that our struggle against white supremacy is reaching a fever pitch.

Nice description by the New York Post. The left are a bunch of weenies.

That’s a shame. Projection is on the rise.

I’ll guess that the flag burners support selective-child, class diversity, and selective exclusion. I wonder if they get their payments directly or through transfers.

Unlikely though it seems, the NY Post is on the way to becoming America’s Newspaper Of Record.

“After being given a plainly visible go-ahead from the NYPD, white supremacists with knives, bikers with hammers, and a motley assortment of various other extreme nationalists were turned loose like dogs.”

WHOA…!!! Those “dogs”…if ANY of that were true…would have left only tiny shards of hamburger for your next-of-kin to fight over, pard…!!!

You not only were NOT lethally attacked by those “dogs”, but you obviously have all your lying, stinking, Collectivist digits intact to write total bullshit on the internet.

You were lucky wieners.

If I were the supervising sergeant on the scene, I would have wondered if it were a staged part of the protest, and told my officers not to interfere.

To be sure here, most of the state controlled media was in full support of the flag burners. The hatred of the true American citizens very real and they are determined to stamp out that feeling, by any means necessary.

I kind of wish that the bikers had brought balloons filled gasoline and alcohol.

That would have taught them to not play with fire and leave it to adults.

My flag-my American Flag-will be proudly flying outside all weekend here in the den of desperate Democrats called Illinois.

SCOTUS is welcome to come and be reminded of what each of the stars represent-state’s rights.

Good gawd, what a load that FB spin is! If any of that was true, the dude posting would be, at best, in a hospital.

I am thrilled that good people showed up to thwart these assholes and send them back to their keyboards. I wish I’d been with them. The irony of NYPD having to “save” them from real Americans is rich. It’s too bad the mayor didn’t order them to stand down! 🙂

According to DeBlasio and his buddies on the left, the real criminals are the real American citizen. They are the ones that are standing in the way of total control by the left. Those damn bitter clingers with their guns, bibles and independence

BTW did I see Heather “wheels” Demain in that first video?