“I will be proud of what hands I get.” 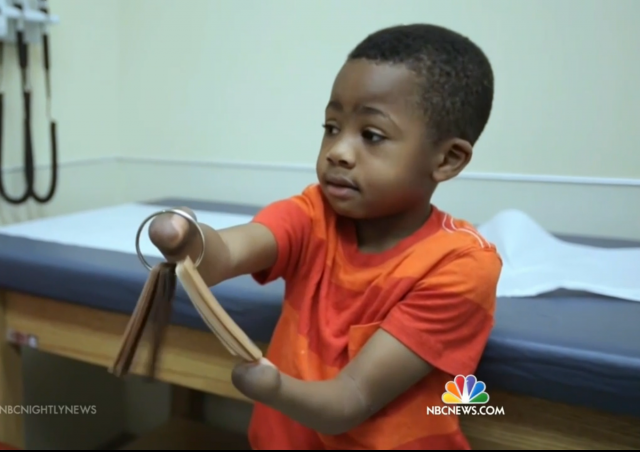 An eight-year-old boy is the first pediatric recipient of a double hand transplant. When he was only two-years-old, a life threatening infection lead to the amputation of both hands and feet. He also received a kidney transplant from his mother.

According to NBC News:

In a surgical first, Philadelphia doctors have transplanted donor hands and forearms onto an 8-year-old boy whose own hands were amputated when he was a toddler.

Zion Harvey told NBC News that the groundbreaking 10-hour operation performed earlier this month at the Children’s Hospital of Philadelphia was a dream come true. He can’t wait for the day he holds his little sister with his new hands.

“My favorite thing [will be to] wait for her to run into my hands as I pick her up and spin her around,” he said.

His mother, Pattie Ray, was overcome with emotion as she watched her son being wheeled out of the operating room.

“When I saw Zion’s hands for the first time after the operation I just felt like he was being reborn,” she said. “I see my son in the light I haven’t seen him in five years. It was like having a newborn. It was a very joyous moment for me. I was happy for him.”

A 40-member transplant team led by Dr. L. Scott Levin had practiced extensively on cadavers before attempting the operation — a worldwide first — on a child.

Doctors spoke highly of Zion’s spirit and attitude. Undeterred by circumstances that would be incredibly difficult for just about any adult, Zion was excited to be able to swing on the monkey bars:

His spirit and resilience didn’t hurt, either.

“I have met with him and his mother several times and you would think an 8-year-old would be overwhelmed or bewildered, or unclear as to the pathway we were setting for him,” Levin explained.

“But when I first met him, I said to him, ‘Why do you want hands, Zion?’ And he said ’cause I want to swing on the monkey bars. That’s a pretty logical answer for an 8-year-old. And a pretty profound statement to me.”

…The loss of his hands and feet has not slowed down Zion, who runs on prosthetics, feeds himself and loves playing video games. “He is a child who has accommodated to the cards life has dealt him,” Levin said.

Still, as he was growing up, Zion secretly wished he might one day have a pair of hands.

“I hoped for somebody to ask me do I want a hand transplant and it came true,” he told NBC News.

…The surgery may have profound changes on the lives of children who are living without hands, Levin said.

“This is the end of the beginning, not the beginning of the end,” he added. “We’ve made a big step forward with this operation.”

How’s that for a little perspective?

Thanks be to God for He has given to the doctors the knowledge and the skill, and to the child the hope, that makes this possible.

Yes! Thanks be to God!
Lord, bless this boy’s recovery and I ask that there would be no complications or rejection of these new hands by his body.

Nice story of a medical advancement, but why emphasize courage? I’d emphasize the child’s gratitude. While I’m not offended as I am when people refer to Caitlyn Jenner as courageous, I do think it’s generous to see this as a profile in childhood courage.

Best of luck to him. I hope everything works out.

And much sympathy to the family of the child whose hands were donated.

They are not telling you about the anti-rejection drugs he has to take, are they?