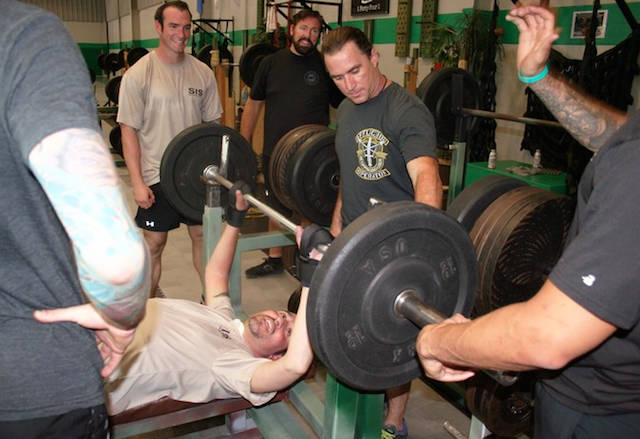 After the evil, inhumane week we’ve had, I think we could all use a little humanity.

Since I can remember, coverage of American involvement in conflict overseas has focused 99% on the strategy, violence, and collateral damage. Almost no attention is given to the after-effects of war and to what happens to soldiers when they come home from the battlefield. It took a nationwide scandal—and more than one veteran death—for the country to recognize the fact that coming home from war means coming home to battle a bureaucracy that has failed the very people it was created to protect.

Chief Warrant Officer-3 Romulo “Romy” Camargo knows what it feels like to come home from the battlefield a changed man. In September of 2008, Camargo was left paralyzed from the neck down after a bullet hit him in the back of the neck during an ambush in Zabul province, Afghanistan. Doctors weren’t optimistic about a full recovery, but Romy began to push through. He got off the ventilator, began to recuperate, and after 18 months, was discharged from the hospital.

Being 18 months in an in-patient hospital, some people get institutionalized and they don’t want to leave. So when I left, the first day I came to the house I was like, ‘Whoa.’ And then I realized, it’s a new day. Let’s get up and do something.”

Camargo has remained active ever since. He has raised money for charities, given pep talks in schools and delivered a rousing speech in May at a major Special Operations conference in Tampa, all the while confined to his motorized wheelchair.

“Active” is an understatement. Motivated by his new lease on life, Romy and his wife Gaby have worked to make the Stay in Step Recovery Center a reality. Geared specifically toward veterans who suffer from paralysis, Romy’s goal is to create an atmosphere where quadriplegics and paraplegics can not only work together in a community atmosphere, but participate in rehabilitation techniques that allow them to actually stand up and exercise.

Family friend and former Special Forces officer Lt. Col. Scott Mann posted a video to his Facebook page that tells Romy’s story, and gives some background on the rehab center:

A WARRIOR RISES A WARRIOR Rises… Want to know what military transition REALLY looks like?Green Beret Warrant Officer Romy Camargo was shot through the neck several years ago in Afghanistan on his third combat tour. He was told he’d never breath on his own or leave the hospital…watch this video and see what Romy decided to do with that diagnosis. Learn more: www.stayinstep.org
Posted by Scott Mann on Sunday, March 29, 2015

The goal is to open up this facility not just to veterans, but to anyone struggling paralysis; the Center’s organizers are raising money for scholarships to cover care for those who can’t afford it.

The Center is set to open this weekend. Good luck to Romy and the rest of the team as they work to help other wounded soldiers win the “mental game.”