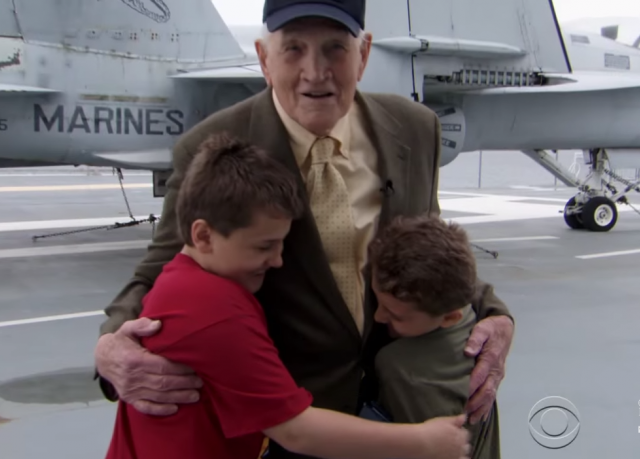 It’s often the most innocuous things in life that result in monumental memories.

A few years ago, twins brothers from North Carolina fell in love with the board game Battle Ship. Battle Ship sparked their curiosity in naval warfare. And the rest is, as they say, history.

A family vacation to see the retired USS Yorktown was a game changing experience for the twins. “I just realized how amazing history can be,” said one of the boys.

During their visit to the USS Yorktown, the boys learned about a man named Robert Harding who served on the Yorktown during World War II. They were able to obtain his email address and began corresponding with Harding daily.

CBS Evening News worked with the Yorktown to bring Harding and the twins together for the first time.

Mr. Harding had seldom discussed his war stories but said, “I guess I needed someone to talk to about it. It’s surprising the way it works out,” choking back tears.

Our connections to the past are a powerful bond indeed.

Thank God fir these boys, the creator if Battleship, and Harding. It’s a great and touching story.

Unfortunately to most Americans alive today, aided and abetted by the NEA, US history began with the election to presidential office of William Jefferson Clinton