Trump Second In Latest NH Primary Poll–But Does It Matter?

Trump Second In Latest NH Primary Poll–But Does It Matter?

Polling is to politics as statistics are to baseball. Everybody is always looking at them, analyzing them, doing deep dives into the data and ultimately coming up with some way to determine if the numbers they see are a good predictor of future events.

In baseball, you have a better chance than in politics. In politics, particularly early on in the process, you’re just as likely to predict who can win a race by throwing darts just as much as you can the polls.

For example, Donald Trump has gained on Jeb Bush in a matchup for the New Hampshire primary:

Jeb Bush narrowly leads the field in the state set to host the first primary of the 2016 presidential campaign, but Donald Trump’s gains in the state suggest the billionaire businessman is establishing a following in New Hampshire.

The new CNN/WMUR New Hampshire Primary poll finds Trump at 11%, just behind Bush at 16% in a wide open contest for the Republican nomination for president. Bush and Trump are followed by Rand Paul at 9%, Scott Walker at 8%, and Carly Fiorina and Marco Rubio both at 6%. Ben Carson and Chris Christie each have 5% support.

As the low numbers at the top of the pack indicate, the field is far from settled. Twenty-one percent say they don’t know which of the 19 candidates tested in the poll they’d support, and overall, 75% say they’re not committed to any candidate.

Those who follow politics always assume everybody is as heavily invested as they are. That’s usually not the case and what it means is, Trump’s numbers largely represent name recognition more than anything else (by that same token, the same goes for Jeb.)

Polls this early on are volatile and fluid and quite honestly, should not be taken seriously. If we take a trip back in time, you’ll see early polling is rather useless, even on the Democratic side. From January to June of 1991, the polling looked like this: 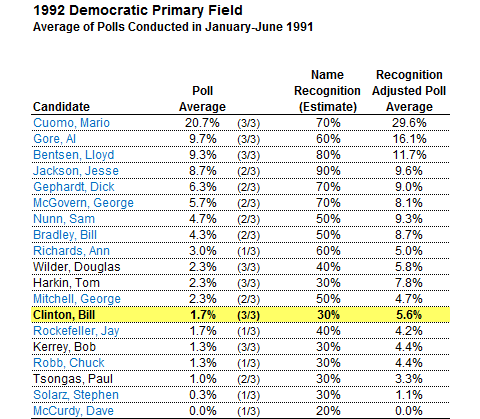 You can see that Jesse Jackson was ahead of Bill Clinton and Mario Cuomo looked like a shoo-in. Things started to change, however, towards the end of the year:

The team at FiveThirtyEight adjusted for name recognition and you can see that Clinton’s numbers jumped as a result.

People want to think Mitt Romney was the heir apparent from the word go, but that’s not actually the case. Real Clear Politics has this graphic showing how volatile the polling in 2011 was: 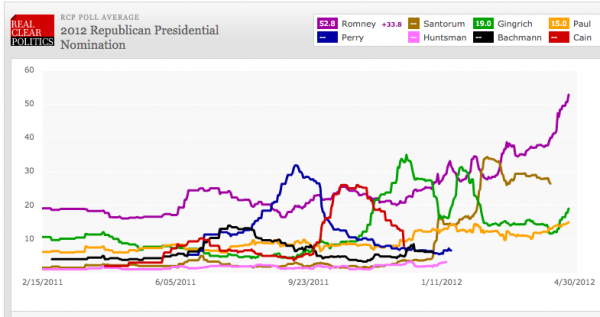 As you can see, Romney started out as the favorite but by the summer, Rick Perry was  in command. Once Perry imploded, people looked for somebody else and it was Herman Cain who rose to the top of the pile. Newt Gingrich was next and Romney even faced a challenge for a little bit by Rick Santorum.

This year will just as likely be all over the map. The good news is, the Republican Party has a large, diverse and well qualified group of candidates running this time around.

The lesson here is to not get too worked up over Donald Trump and whatever early polling success he has. It is not likely to last once primary voters get to know the candidates more and have a chance to really listen to their ideas. Trump will do well, early on, but it largely will not matter.

The Republican Establishment has already determined the 2016 nominee (Yet Another Bush). The Primaries are simply Bread and Circuses for the unwashed, unmonied mob. The Election itself will be decided behind closed doors before November 2016 when sufficient money is passed.

I detest the RINOs, but I’m not sure they will get their first choice this time.

What utter nonsense. The GOP nomination process is the most open and democratic in the entire world, even more than the Democrats’. More of our delegates are directly chosen by the people.

The reason the lunatic fringe is never happy with the nominee – those old enough will recall their complaints about Reagan throughout his tenure – is because they are fringe. They are never happy by definition. And they put up candidates who represent them – unqualified, and of questionable sanity.

You don’t lose because “The Establishment forces someone down [your] throats,” you lose because your candidates suck and people vote for someone else instead. Get over it.

They sucked, and people voted for someone else.

We ceased being a free country long ago, and the last vestiges of rule of law are now being swept away, as we watch and wonder if we can do anything about it.

We can do A LOT about it. Look what power a tiny minority of gays managed to assert.

Think about what an enraged majority can do. We have to be enraged at own party and purge the crap out of it.

Except for 2000, when there was a clear frontrunner and heir apparent in Gore for Democrats, going back to 1980 and Reagan for the GOP, the open nomination contests have been quite volatile. Check the June of year-before NH polls and you won’t find them enlightening in the least as to the eventual winner – either of NH or the nomination in either party.

Polling is the media class’ only way of avoiding speaking of issues. The left and their media surrogates can only talk in soundbites and slogans, deeper conversations expose the utter bankruptcy of their ideas. So the coverage focuses only on the horse race aspect: who is ahead, who has momentum, etc., instead of real issues.

Too bad we failed to see this coming with Presidential debates. The short Q&A format favors Democrats’ sloganeering over rational discussion. Lincoln and Douglas debated for hours, taking up to half an hour at a time to explain their positions.

Alas, our national attention span wouldn’t stand for that, 40 years of federal dominance of education at all levels have successfully lowered standards to the point you can graduate from high school as a functional illiterate. But, a dumber electorate keeps the Democratic Party competitive.

You forgot about the GOP — and especially Mittens Romney –allowing that pig, Candy Crowley to debate for little Barry.