Is criminalizing speech the answer? 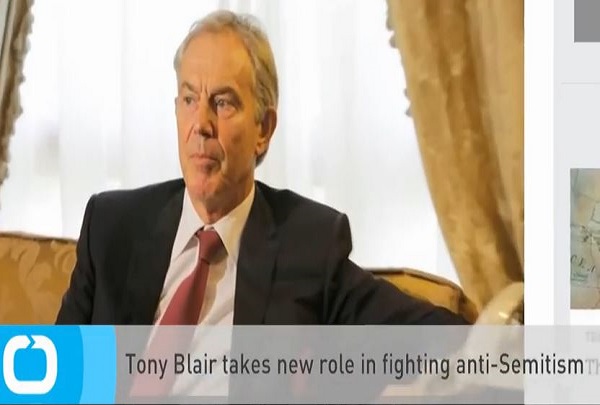 From physical attacks, to vandalism, to verbal attacks on those walking while Jewish, Europe has seen a rise in anti-Semitism in recent years. So much so, that a resolution condemning the rising tide of anti-Semitism in Europe passed the Senate by unanimous vote on Thursday.

The resolution, authored by Senator Bob Menendez (D-NJ) and co-sponsored by 60 other senators encouraged “greater cooperation with the European governments, in the European Union, and the Organization for Security and Co-operation in Europe in preventing and responding to antisemitism.”

“In light of the rise of antisemitism in Europe, this resolution calls on European governments to not only stand against antisemitism, but to work to end it,” said Sen. Menendez, applauding the unanimous passage of the bill.

In the UK, former Prime Minister Tony Blair has been appointed to head the European Council on Tolerance and Reconciliation:

Nicholas Watt of The Guardian reports:

Tony Blair is to take on a new role tackling antisemitism by assuming the chairmanship of a pan-European body that campaigns for stronger laws against extremism across the continent.

The British former prime minister has been appointed as chairman of the European Council on Tolerance and Reconciliation a week after he announced that he would stand down as the envoy of the quartet on the Middle East.

In an article for the Times, in which he sets out his plans for his new role, Blair says that he will campaign against the abuse of religions which has become a “mask behind which those bent on death and destruction all too often hide”.

Blair says he will be campaigning to implement the recommendations of a report by the council which outlined legislative proposals to give greater power to judiciaries to prosecute hate speech, to lower barriers to what constitutes incitement to violence, and to make Holocaust denial illegal. [emphasis added]

The council’s report to which Blair refers can be found here.

I do find some of the council’s recommendations and goals somewhat troubling from a First Amendment perspective.  As vile, for instance, as Holocaust denial is, I’m not sure that making it illegal is a viable solution here in America, where anti-Semitism is also on the rise.

In his comments on his new position, Blair said:

“Incidents of extremism, rising anti-Semitism and surging Nationalist forces who seek to cultivate a spirit of resentment by playing on people’s fears, threaten our European ideals of freedom, equality and a desire for peace.

“But such intolerance has been rejected before in our history and must be rejected again today. The ECTR stands against such close-minded views – and I am delighted to have this opportunity to work with them to promote our shared vision for the future: societies based on an open-minded, inclusive and tolerant worldview.”

With the marked rise in anti-Semitism across Europe, it’s clear that something needs to be done.  From the recent UK elections in which the anti-Semitic Galloway and his merry band of Israel haters were voted out to this council’s stand against anti-Semitism, the UK and Europe are taking steps to address the problem.

“Incidents of extremism, rising anti-Semitism and surging Nationalist forces who seek to cultivate a spirit of resentment by playing on people’s fears…”

Right there you have it, and it couldn’t be more clear.

Blare is a Collectivist. He intentionally sets things that are morally UNEQUAL on the same plane.

The growing realization in Britain and Europe that their national identities are in real jeopardy, a direct result of very low birth-rates coupled with VERY liberal immigration policies, is set as morally equal to antisemitism.

And, of course, the answer is to censure speech.

How typical. How predictable.

I wondered if I should even say it, but I think I’ll say it: just because Tony Blair converted to Catholicism does not make him some sort of expert on reconciliation between the religions. He seems to think it does. So after failing to encourage Middle East peace for years he’s turned to slaying the anti-Semitism dragon, when anti-Semitism had been banished from civilized society just fine until Muslim immigration shifted the goal posts.

On one side, you have people setting off bombs, hacking people to death, gang-raping young girls in an institutionalized fashion, demanding that Britons abandon their haram customs, etc.

On the other side, you have Britons noticing all of the above, talking about it, and saying “We have a right to protect ourselves and our children, and to keep our own culture.”

Which side is worse? Tough question, isn’t it?

‘Blair says that he will campaign against the abuse of religions which has become a “mask behind which those bent on death and destruction all too often hide”.’

And Blair will never acknowledge that one particular religion is not being “abused” as a “mask” for those aims; rather, the orthodox doctrines of that religion are the explicit motivation for “death and destruction.”

I’m a single, childfree male who suffers from repeated rape in Amerika when it comes to taxes and gummint benefits. If I were a married, breeding Jew, I would just sit back, enjoy my privileged status and not worry about mere verbal attacks.

I see you are another liberal troll looking to spark a flame war.

Sucks to be you, snowflake. Obama is an utter failure. Hillary can’t be president. And, the Democrat brand is so soiled it’s in need of being relegated to the trash heap of history.

I think what we need is a conservative Jewish president like Netanyahu.

European Council on Tolerance and Reconciliation

Riiiight, that’s the problem … not enough tolerance and reconciliation. So bend over a bit further, Tony; you have a lot more surrendering to do.

Blair says that he will campaign against the abuse of religions

It’s not clear that we’d want government dictating the details of religious dogma. Government in general does a poor enough job with its own dogma.

But following a time-honored European tradition, if a problem can’t be fixed by government fiat, it can always be made worse.

Yessir, that’s what we need, a government which gets results, even if they aren’t the results anyone would want.

I think these words need to be viewed through the lens of a Europe under the sway of Islam. “Greater power to judiciaries to prosecute hate speech” will be used to further entrench Sharia blasphemy law. “Reconciliation” is a euphemism for “drop your complaints or else”. You see it all the time in Egypt, for example, where (for example) some Copt girls get kidnapped, the Copts get outraged, and the Muslims then demand “reconciliation” to “improve community cohesion”.