The Future of Modern Liberalism

The Future of Modern Liberalism 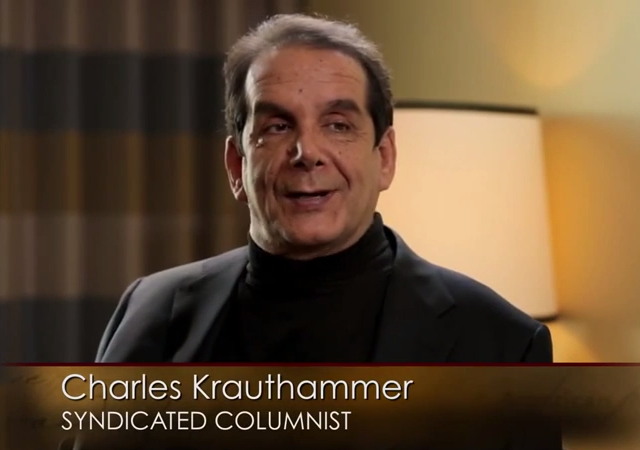 Charles Krauthammer was recently interviewed by Charles R. Kesler of the Claremont Institute who asked for his opinion on the future of liberalism.

The conversation begins with Krauthammer’s thoughts on the liberal journal The New Republic, for which Krauthammer served as writer and editor in the 1980’s. He points out that TNR has never turned a profit and that little will change under its new leadership.

Their talk then shifts to the future.

Krauthamer suggests that the Democratic Party will shift back towards the center after Obama, who he says “wrecked” the party. He cites the short bench of candidates they have for 2016 and the drubbing they suffered in the last two mid-term elections.

He doesn’t necessarily know where liberalism will go but ends with a reference to the economist Herbert Stein who famously suggested that if something cannot go on, it won’t.

Take a look and leave your thoughts in a comment.

Yes, if something cannot go on, it won’t, but usually we don’t know how.

Does anyone know how the situation with Greece will work out?

I think he is right, that Liberalism in the United States is exhausted, but only because it won an overwhelming victory in the US, to the point that pushing Liberal ideas any further will put us in the bizarro zone, complete with perverse results.

One of the great concepts of Liberalism in the United States was that every citizen is entitled to equal treatment under the law, regardless of race, creed, or color.

Now, we have the United States Federal government demanding disclosure and tracking of the race, creed, color, ethnicity, and sex of every single child in the country, as well as state-supported schools changing student’s SAT scores. There was an article in the local paper just before the State of California sent out acceptance letters, saying that when the State was considering accepting students, white boys would get their SAT scores, Hispanics would get +25, black students would get + something more (75?) and asians would bet DOCKED 50 points.

This is all in the name of “fairness” or “affirmative action,” but it most definitely is not equal treatment under the law.

There was a time when it was considered very Liberal to support affirmative action as a temporary measure to remedy past racial discrimination. Now this former remedy has become a tool people of ill will use for invidious discrimination.

Amen, you can say that again!

They will never change anything but their rhetoric. They will sound more reasonable by lying about every thing but, their goals are fixed and they never take their eyes off the prize which is government power.

“Liberalism” is a vastly different…even antithetical…concept from Collectivism or Progressivism.

And here’s the thing about understanding where American Collectivism is now headed; they are out. They’ve dropped the pretense. At the same time, they’ve created a small but very effective cadre of Red Guards that will TRY to continue to drive toward a “pure” culture. Even now, they have begun the inevitable process of eating their own and spreading a reign of terror in a soft tyranny.

This will fail in the U.S. Most Americans HATE being lied to, and the Collective has nothing BUT lies. Most Americans LIKE people and are perfectly happy to treat people with respect and equality under the law. We HATE the idea of one group or another being held to a separate standard, which, of course, is a staple of the Collective.

Collectivists HATE the middle-class, and historically have been very clear about that hatred. In terms of outcomes, we can see what they’ve managed under the Obamic Decline, and where they would happily go if they were permitted.

America’s repulsion of the Collective has already started, and it will grow in intensity and vigor as more and more of us just say, “NO!”. We will insist on a return to law, to standards of behavior that apply to all, and to criteria for selecting for jobs, students, and advancement. Why? Because it is the only rational way for us to live and to prosper. And…perhaps…to survive the coming cataclysms.

The fact has always been that the surest way to spark a nasty rebellion is to thwart the ambitions of the middle class.

RE: “…Americans HATE being lied to, and the Collective has nothing BUT lies.”

That’s what psychopaths, such as the ones in control of the Democrat Party, do non-stop isn’t it?

Obama can’t tell the plain simple truth if it was to avoid ISIS beheading him.

Wouldn’t be so bad if it was only the democrat party that was ruined by Obama. It’s the entire free world that has been punished by this hater of freedom.

The problem is not Barack Obama, although he is a symptom, The real problem is people like George Soros and his ilk. As long as they control the world’s monetary system, people like Soros will try control everything. They want to be the potentates of the 21st Century and take the world back to the Dark Ages, where the people do what they say or be slaughtered.

People like Soros have hated the concept of the individual having the say in what a government does. These people have been plotting the downfall of the United States since its founding. They thought they had their chance at the start of the American Civil War, but fumbled.

The Left has to rely on the gullible young and the mass of third world illegal immigrants in order to continue as a relevant political party. The young and the undocumented are the only fools left who believe the Big Lie of the Left: that you can continue to take the bounty of the producers, in order to give to the non-producers, in a corrupt attempt to make everyone “equal”.

You’ve left out a major constituency—women.

To the extent that we can generalize, women tend to favor bright colors, shiny objects, fuzzy animals, gaudy shoes, and authoritarian politics.

Exactly why they tend to favor the totalitarian left is a matter for conjecture, but whatever the cause, there doesn’t seem to be much that anyone can do about it.

I think you are correct if you modify your hypothesis to ‘single’ women. Once married with children, women tend to see like in a more realistic way.

We are headed for Nineteen Eighty-Four, and there is no turning back.

The union just might split up – and it’ll be 1984 for those left behind.

Right now, the ideal of Liberalism is contained within the Republican party. Democrats abandoned it to the perversity of the Progressive Left. Their goals are anything but “liberal”. The Left is totalitarian. Hardly Liberal at all.

The pendulum doth swing twixt left and right and the middle class is gravity.

All Obama, et al, have done is define how far left the pendulum can be forced before reverting to the right. 2016 presents an excellent opportunity for conservative candidates. Unfortunately…. GOP.

Henry, did you know that in 44 out of 50 states there are more independents than Democrats or Republicans? Did you know 75% of them self-identify as middle class?

Sounds like gravity to me. Stand back, everyone. Pendulum comin’ through….

Also sounds like the beginnings of not a third party, but a new party. (either the Democrat Party or Republican Party will have to go as a viable party, replaced by whatever indies might coalesce into. This has happened many, many times in US history.)

Not by any definition of the word modern I’ve ever seen. “Modern Liberalism” is as old as dictatorship!

Liberalism ‘modernizes’ only by switching out old terms that have gotten a bad name for pretty sounding new euphemisms, but the main theme forever remains despite the occasional change of camoflage.