“Leadership in Washington is not listening to the American people.” 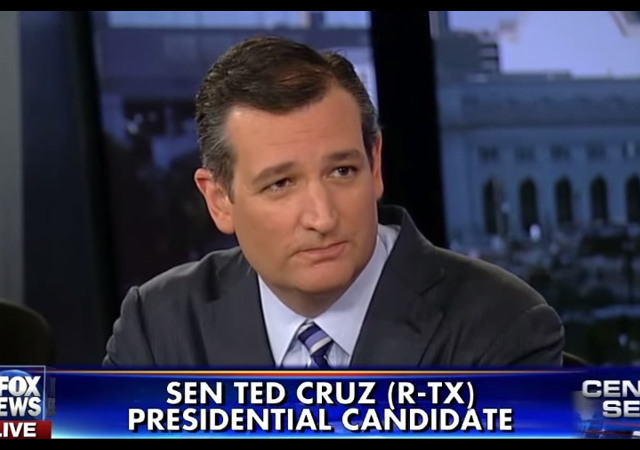 The senate passed the Trade Promotion Authority bill yesterday but it did so without Ted Cruz who supported an earlier version of the bill.

Sen. Ted Cruz, a free-trade advocate who had supported legislation to expedite trade agreements, on Tuesday flipped his position and announced on the eve of a crucial Senate vote that he was prepared to vote against a new version of the bill, demanding that GOP leaders assure him that they had made no “secret deal” to keep the controversial Export-Import Bank alive.

“As a general matter, I agree (as did Ronald Reagan) that free trade is good for America; when we open up foreign markets, it helps American farmers, ranchers, and manufacturers,” Mr. Cruz said, announcing his switch in an op-ed for Breitbart News, a conservative website that has been a vigorous critic of the Trade Protection Authority (TPA) bill known as “fast track.”

“But TPA in this Congress has become enmeshed in corrupt Washington backroom deal-making, along with serious concerns that it would open up the potential for sweeping changes in our laws that trade agreements typically do not include.”

Cruz was a guest on Special Report with Bret Baier last night and although questions from the panel included a wide array of topics, Cruz’s switch on TPA was the very first one.

The op-ed Cruz wrote for Breitbart made his position quite clear:

Enough is enough. I cannot vote for TPA unless McConnell and Boehner both commit publicly to allow the Ex-Im Bank to expire—and stay expired. And, Congress must also pass the Cruz-Sessions amendments to TPA to ensure that no trade agreement can try to back-door changes to our immigration laws. Otherwise, I will have no choice but to vote no.

There’s too much corporate welfare, too much cronyism and corrupt dealmaking, by the Washington cartel. For too long, career politicians in both parties have supported government of the lobbyist, by the lobbyist, and for the lobbyist – at the expense of the taxpayers. It’s a time for truth. And a time to honor our commitments to the voters.

Ted Cruz is dead to me. He changed his vote when he knew that TPA would pass. His vote was just CYA for the primary elections.

So you support the Import Export bank?

The IM-EX is a red herring. Cruz was gung-ho for the TPA and only when he saw that it would pass, did he ask for cover from Mitch and change his vote. It’s all posturing for the campaign trail so he can say he voted against it.

I don’t get it. If he says that he voted against the TPA he is going to have to give a reason for it, otherwise he will face the execution squad that is the media. That he flip-floped in my mind is more detrimental to him than having voted against it. Look at what happened with Rubio when he changed his mind.

I see Cruz as more principled if anything by doing this because flip-floping is more damaging to his campaign aspirations than voting for the TPA.

Yeah, you’re an idiot. I’m with Cruz on this one…the government has their fat fingers in too many pockets as it is. Corrupt lot up there in DC.

Cruz has been taking a drubbing from a lot of Texans and other supporters including me. I agree.. “Dead man walking” as far as any presidential aspirations are concerned.

I want a doer, not a slick talker…

besides, after today, it doesn’t matter what the legislation says on paper…

it’s all one big con, and we’re the suckers.

You’re exactly correct, God Bless America, and I thank her for what she was and for the chance to live under her flag for many years.

I will miss America, as will the world, for what she was then and what she is now no longer.

We now live under a revolving monarch, whose name is not truly known and whose philosophy seems to be “I got mine!”

“Leadership in Washington is not listening to the American people.”

As it stands, that sentence could be taken two ways. I assume “The” was left off, at the beginning of the sentence.

Unfortunately, reading it as a description of what “leadership in Washington” is, is probably the more accurate.

I don’t think an article has ever made a statement into something else, and it seems very clear to me that he is talking about “(The) Leadership in Washington” aka the Federal Government central command dictators.

So, he’s ok with the Global Governance in the TPA.

He’s ok with the huge tax hike on small businesses in the TPA.

He’s ok with surrendering Congress Constitutional powers to the POTUS that’s in the fast-tracking of this trade bill.

But he’ll vote against it, now that he knows it will pass with or without his vote, for a meaningless promise from a man who never keeps his word?

There are issues because there appears to be a yielding of sovereignty in the deal, and because Obama lies and will do anything to sneak in his anti-American policies, into every nook and cranny he can find. Repub’s won’t stop him if it benefits their corporate owners.

Trade indeed can be beneficial to both parties, but so far it has been good for corporate America, but it is indebted America that is keeping things afloat, both with free global policing, and US buying on debt, public and private. But when we start unwinding some of that debt, and some of the legacy entitlement costs ($120 trillion in unfunded largely “earned” retirement benefits), we are going to have to pull a lot of rabbits out of the trade hat, rabbits we put in at the rate of $40B a month.

The trade deficit is around $45 billion per month. So a cool half trillion a year of cash flows out each year, but standard of living is increased for all as we fill our homes with cheap Chinese stuff. We just have to ignore all the debt piled up. Some Chinese guy just bought some 28,000 acres in the Adirondacks, for $23 million. So multiply that by 2000 per month and I guess we can balance the accounts.

But as long as no one does the math, we can decry how bad “protectionism” is. Opening markets is good for the world, but we can’t count on increasing debt forever, or debasing our currency to pay debt in inflated currency. We are doing that (QE and ZIRP), but can that continue, even as debt goes parabolic? $9T to $18T in just six years, double double toil and trouble.

But corporations are global, so they don’t care about our trade balance, or American debt, or our liberties.

Or maybe I’m missing something, but I don’t think financial leverage and inflated stock/bond markets make a real economy.