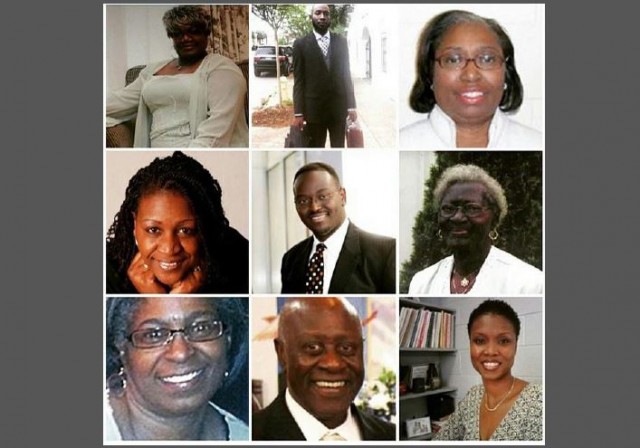 Is it true the pastor was a Republican politician?

Where the others “Republican?”

Not according to his legislative profile.

Not that it really matters one whit. He was apparently a mensch.

Perhaps just confusion on the layout of the pictures and the names, but is one of the Reverends a lady? Is the gentleman with the briefcase named Tywanza?

What an awful waste of life.

May God bless and protect their souls, and may He comfort their families.

May the God of all mercy comfort them and their loved ones.

These are salt of the earth people. They were meeting to pray to the living God. They were in His Presence when they died.

As I said “These are salt of earth people…”
http://www.nationalreview.com/corner

Live a life of peace, but be prickly and hard to eradicate.

You will never see a finer set of examples as to what it means to be a Christian. First, the victims welcomed a stranger and their families have forgiven a killer. Rather than play politics and grievance mongering like most have done after other recent events, they have stayed true to God.

I hope and pray that by their example good will come out of all this. I pray that this will be the spark that ignites revival.

Thanks for posting this. I grieve for my lost brothers and sisters and hope to meet them on the high ground.

My thanks, too for posting this. Their names are important, and while I completely agree with a delay to notify the next of kin, it seemed to me that their names came very slowly into the news, possibly because there were so many.

May God bless them, and console their families.

There was a gang killing in Trenton NJ almost two years. At the funeral in a church, a black church, a rival gang shot up the service. That was the peak of killings on Trenton, after that the killings went down. Still not gone, still happening. But a lot less. People got disgusted with the violence. At least for a awhile, and while they weren’t drinking too much late on a hot night, in an iffy social environment.

Yes I find these kind of “say their names” public grieving sessions overdone. Group tTraining in indulgent emotionalism. An index of the politics of emotional irritation.

Real people died, good people, true. At least it was a good they were all gathered for a good. cause.

Yet real people live in Trenton and attended that funeral that day some months ago, where a black gang shot up the black church. Will you also say the names of the dead in Trenton? They too are (were) fellow humans. I’m not talking just about the innocents killed, I’m talking the stone cold killers. They are humans too. The Trentonian newspaper has a web site dedicated to the dead. http://trenton.homicidewatch.org

Each had lives each strove in some way for good in their lives. That’s just the human condition. Even the young white man who killed the folks in that study session was in some way trying to better the world. But he was — that is obvious — very confused about it. He was seeking to make sense of the world. A mad world. Why did the thriving yet racially divided nation of Rhodesia turn into the pitiful and sick nation of ¸Zimbabwe. That’s madness too. Many dead THERE because of it, of all races. Say THEIR NAMES.

Stop the drama already. Deal with the reality.

They’re with Jesus now. He’s coming back, he promised.

Thanks for posting this and reminding us to say their names, Wm.

Absent in the body, present with the Lord. They have immediately joined that great cloud of witnesses and are awaiting us in the Not Yet.

May God comfort their loved ones in this time of deep sorrow. May He bless and keep them. May He touch the lives’-taker and bring him to repentance.

Prof. Jacobson, after the horrific slaying of those campers in Norway (2011) my cousin from Oslo said that the gunman’s name was never used in print or in the media. Not that it was a secret, it was their way of not giving the killer any publicity. The title of this thread was a sad reminder. Name the victims, say each and every one, not his.

Was this a racial crime? Yes. This crime fits perfectly for a very good reason. The person responsible has stated he wanted to start a race war.

I do find it strange that he picked a group of Christians to kill in an effort to start his race war. Perhaps he should have chosen people who are involved with the BlackLivesMatter movement to make his point.

I read about how the families of those killed have already forgiven this person. There has not been any riots so far. The families involved have shown the best side of being Christian, in the true sense of what it means to be a Christian.

I feel certain that God has welcomed each of the 9 into His Kingdom.

It is also worth noting that it seems the riots always seem to accompany a death that occurred because the person who died was in the process of committing a crime… yes even that one in Baltimore was not innocent as far as committing crime is concerned.