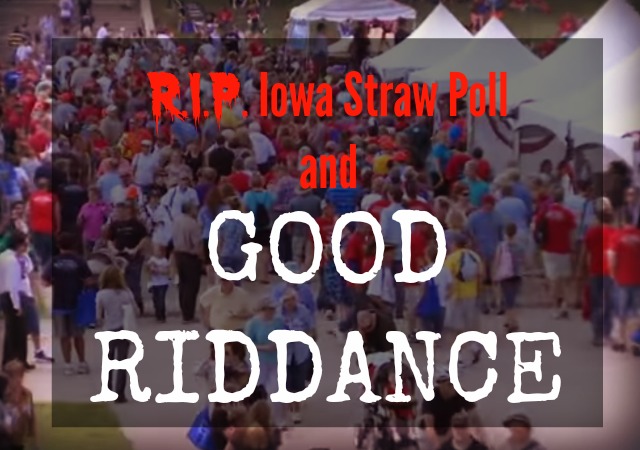 The event that once marked the official beginning of GOP presidential run will not take place this year. “We set the table and they didn’t come to dinner,” Iowa GOP Chairman Jeff Kaufmann reported The Des Moines Register.

The Iowa Straw Poll was far from an accurate scientific poll. Declaring the champion the candidate who spent the most to win, candidates vying for national publicity would drop major bank for the “______ wins Iowa Straw Poll” headlines and the subsequent appearance of a legitimately strong campaign.

In 2011, Mitt Romney declined to participate and this year, Jeb Bush, Marco Rubio, and Mike Huckabee announced they too would bypass the Iowa fun.

The straw poll was one massive fundraising event for the Republican Party of Iowa. It’s not entirely surprising campaigns recognized skipping the over-hyped pay-to-play event might be a better utilization of their time and resources.

Howard Kurtz explained the Iowa Straw poll sham during his broadcast in May:

According to the Des Moines Register, there were three reasons the straw poll was nixed this year:

There was too little interest from the presidential contenders; the fundraiser likely wouldn’t have made enough money to break even; and there were concerns about jeopardizing Iowa’s first-in-the-nation caucuses — Iowa party officials were getting blowback from national influencers for appearing to be bullying contenders to compete.

“Am I disappointed? Yes,” Kaufmann said. “But I don’t say this really with any animus toward the candidates. They made decisions that were good for their campaign. I would much rather spend my time highlighting Hillary’s dysfunctionality as a potential president than trying to gain a particular candidate by backing them into a corner and forcing them into Boone.”

…In the last few weeks, at least 10 people with Iowa influence had launched a “full-court press” to persuade the presidential contenders to sign up for the straw poll. Branstad was among them and it wasn’t just “a wink and a nod” — the governor was truly advocating for the straw poll, Kaufmann said.

“But there is a point when advocacy becomes pushy or even bullying and that does not bode well for our first-in-the-nation status,” Kaufmann said.

The Iowa GOP board had decided to move the straw poll from its historic home in Ames to the Central Iowa Expo in rural Boone. The Boone location would have been beautiful, Kaufmann said. “Not one single candidate told me that Boone was a bad move,” he said. “In fact more said it was a good move.”

Some candidates had said they might show up at the straw poll grounds just to give a speech, but wouldn’t spend money trying to win the straw poll. That meant the fundraiser would likely have struggled to break even, much less garnered hundreds of thousands for the party as it has in the past.

Still, the party will have enough money to carry out the Iowa caucuses in a strong way, even though “the previous regime put us in a heck of a position” financially,” he said, referring to the crew of Ron Paul/Rand Paul backers who took control of party headquarters after the last caucuses. Because party officials had revamped the rules for the straw poll to make it cheaper for presidential contenders to compete, it wasn’t going to be a big moneymaker for the party anyway, Kaufmann said.

Thankfully, we’ll be spared gratuitous photos of candidates awkwardly eating hot dogs. For that fact alone, the demise of the Iowa’s straw poll is a welcome development.

Re: “The event that once marked the official beginning of GOP presidential run will not take place this year.”

Now if we can just require Iowa to be the very last primary of all states – to repay for their state’s great crimes in that arena in the past……..

Now the start of the campaign season is the Red State Gathering!

The Ames Straw Poll was nothing but a state party fundraiser. It was Pat Robertson in 1987 who made it a point of winning to generate buzz, after that it became who could bus in more supporters. At $25-$35 a ticket, most candidates paid for the tickets themselves to turn out supporters for the vote.

It was never a good predictor of either the winner of the Iowa Caucuses or the nomination. In fact, only one winner went on to win the election in the same cycle, GWB in ’99-’00.

The candidates are making the right choice, since the Democrats are projected to spend a billion dollars on the presidential race alone.