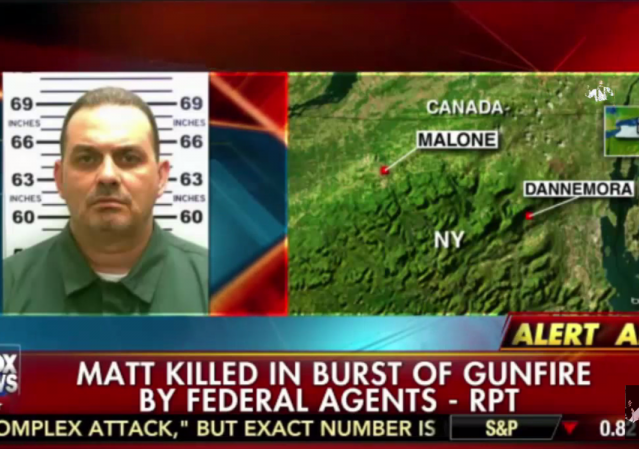 According to a breaking news report from the Associated Press, New York prison escapee, Richard Matt, was shot and killed by police. The manhunt has been underway for close to three weeks. The other escapee, David Sweat, is still at large and being pursued by law enforcement.

Richard Matt, one of two escaped murderers from an upstate New York prison, has been shot and officers involved in a three-week manhunt are pursuing fugitive David Sweat, a law enforcement source briefed on the investigation said Friday.

“Matt has been shot, he’s down,” Lenny DePaul, a former U.S. Marshal told CNN. “Apparently he’s been hit. Not sure what his status is at this point.”

The shooting occurred on a day that the New York State Police reported that Matt and Sweat may be headed to Canada.

Investigators were conducting DNA tests on potential new evidence, a source close to the investigation said.

Conclusive evidence was found in the cabin, which is being tested, he added.

“There has been no definitive credible sighting based on a physical description to pair with the evidence, but we’re certain that the evidence is conclusive,” State Police Maj. Charles Guess said Friday at a news conference.

DePaul told CNN he believes the shooting occurred in Malone but had no confirmation.

“They stuck together,” he said.”They needed each other.”

More than 1,100 law enforcement officers have been pursuing new leads with a “high degree of confidence,” Guess said.

Two prison employees have been charged in connection with the men’s elaborate June 6 breakout, and the accusations against them highlight a series of apparent security lapses.

Investigators from the New York State Inspector General’s Office are looking into possible breaches of security protocols that allowed Matt and Sweat to escape, setting police on a vast and costly manhunt for the past three weeks.

Other agencies are conducting investigations at the prison.

More details as we have them.

This may be resolved sooner rather than later:

Weren’t we told that the only people the police shoot and kill are unarmed, black teenage choir boys?

Is this the time for an angry #whitelivesmatter protest?

I mean, like man, he only tortured and murdered his boss, it’s not like he did anything wrong, ya know, like being a devout Christian or Jew. And the guy he murdered in Mexico, hey, it was Mexico, no big deal. The guy probably asked for it, like maybe he looked at him. These cops, man, they’re like oppressing us with their law and stuff. /sarc

Why isn’t the liberal media putting up pics of Matt when he was 13-y.o.? Oh, forgot, he’s white.

Good chance Matt already offed the other one.

In the words of Tim Curry in The Three Musketeers; “One less mouth to feed!”

I’m just glad they got him before he hurt anyone, which was likely coming.

A massive saving of taxpayer dollars. This one will not be feeding at the public trough anymore.

I feel as if I should say something nice.

Well, think about this in relation to the 2nd Amendment. One guy with a gun, in a small area, takes 250 to 1,000 cops to track and take down.

I was arguing with an English doctor elsewhere, who was pontificating about how the gov’t would eventually take our guns, and I tried to tell him how afraid of being shot or stabbed, the cops are. This is proof.

The cops don’t take guns from criminals, or gangs, or the mobsters, for this very reason. If they won’t go into the woods after an escaped murderer, do you really think they are going to risk their lives to take granny’s little pistol???

You know what puzzles me?

Game wardens go out into the woods every day and confront people with rifles and shotguns. Yet I’ve never seen anything about how many of them get shot in the line of duty. Has to be some, but no mention is ever made.

Why is police work in the city so much more dangerous? If it is.