The Governor makes it official 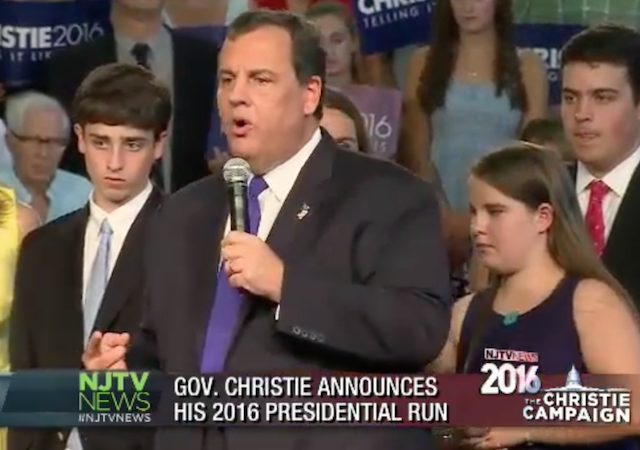 We’ll be covering the announcement live here. He’s supposed to kick off any time, and already correspondents are describing the mood in the venue as “a madhouse.”

Live stream hat tip to Save Jersey (UPDATE: the current embed has the full announcement and pre- and post-game coverage):

We’re off! Kicking things off is a teacher, friend…and registered Democrat. Will this end up on the union websites first, or the conservative ones?

Livingston teacher introducing Christie, was friends with his mom pic.twitter.com/FhNzHbCbk3

Stupid media tricks: as Christie walks out onto the stage, NJTV automatically pivots to talking about how many union protesters are outside, and how controversial it is that Christie won’t commit to more funding for pensions. He has said that “the money isn’t there,” and it’s a valid discussion, but that might be the fastest narrative pivot of the cycle so far!

Christie takes the stage with his family to announce for president pic.twitter.com/ZfMarARadW

Christie is playing the part of the Man of the People really well here. He’s focusing on Jersey (and the crowd is loving it), the working class, and “growth and opportunity.” He’s keeping it simple: more America, less government, let’s take this momentum to Washington.

Christie: "Both parties have failed our country." Pushes benefits of compromise.

Christie jabs at "our bickering leaders in Washington DC who no longer listen to us."

Christie: "We must tell each other the truth about the problems we have"

…and here comes the snark. “I am not running for President of the United States as a surrogate for being elected Prom King of America.” I’m going to send this to the comments—do you, readers of LI, think that that level of snark will help or hurt him? As a matter of messaging (and not of policy) I like it, but I’m wondering if our cross section of America is already too turned off by Christie on a policy level to allow snark, humor, and general bombast to resonate.

This is going really, really well for him. He’s Polished Chris Christie—and he looks like a contender. (Whether or not that resonates with the conservative primary voters he needs to win the nomination remains to be seen—I’m highly skeptical, but the rhetoric was good.) His emphasis on authenticity felt like a signal of things to come; he promises a campaign that focuses on truth as opposed to attacks, and I’m wondering how long that will last. (Five minutes? Ten minutes?)

Authenticity alert : Christie promise a campaign "without spin or focus groups " and to answer honestly whether it makes you cringe or not

I'm getting the sense that Christie is trying to say he will deliver straight talk.

Christie says won’t focus group anything. No spin, no pandering, he says.

Of course, Christie will have a lot to deal with—from both the home crowd, and national groups already attacking the entire Republican field.

Not everyone at Livingston High School is a fan of Christie's 2016 announcement. Protesters outside pic.twitter.com/x4juBh1ezS

Chris Christie is pretty proud of this, we guess. pic.twitter.com/SiUZTPDT7r

That being said, in the short term, he’s probably thanking them for the eye-catching memes bolstering his anti-Democrat cred. (He can use all the help he can get.)

No twinkies for you!!

For me? What did I do? I just report on this circus!

Excuse me if I fail to fawn over this RINO.

The crowd sure is. I find it interesting that this is a man who is so, so polarizing, but a quick scan of Twitter shows me that most of the people criticizing him are Dems. Do you think R primary voters are jaded, or just don’t care, or don’t see him as a threat?

I think there is a huge part of the R base that will never forgive him for the slobbery fellating he gave Obama during the home stretch of the 2012 campaign.

The only thing larger than his appetite is his ego, and I think he torpedo’d Romney out of spite. Just for that, if I ever had the chance, I’d kick the fat sloppy bastard’s ass and good. I sure as hell would never vote for him, under any circumstances.

I seriously think he would have just as good a chance of being elected, if he ran as a Democrat.

That should tell you why I have no interest in the man.

If you believe Christie , I got a bridge to stall you

Interesting that the reporter outside commenting on the protesters walking back to their buses, made no mention of who paid for all the buses or why most of the protesters were wearing red t-shirts and carrying pre-printed signs.

Why is everyone and their dog (with its fleas) jumping in the GOP race? Must be money huh?

I want to make it perfectly clear that I am NOT running for President.

Now, that does not mean that I will not accept campaign contributions because…. well, you know.

He’s been in bed with the Bushes for 20 years. He’s Jeb Bush without the prep school training. I don’t know why he’s running. He’ll be gone after New Hampshire primary.

The only thing I can think is that he’s running for Jeb Bush’s VP slot.

“The Governor makes it official”

Oh boy, just what is “needed”, another northeast LIBERAL. Did he say he was running for the “R”epublican primary?

well, if that’s his daughter at his left elbow, she appears to be following in his “fat” steps. 😀 😀

Boy, Christie nailed it. More compromise, that’s what we need.

I guess he hasn’t noticed that GOPe compromised us right out of a country.

Hey, it worked for MacArthur. He compromised his way back to the Philippines.

And Patton compromised the hell out of the Germans all across Europe.

And the Battle of Trenton was a tour d’ main of compromise.

If he splits the establishment GOP vote with Jeb!, that’s good.

Fatboy does have an interesting strategy: given that even most democrats find Hillary Clinton disgusting, Mr. Donuts just might make himself more palatable for these voters. If the GOP nominates another rino numbskull, the base will stay home and we could find the White House occupied by someone even fatter than Michelle Obama.

Christie never had a chance of winning the nomination. His record on gun control precluded that. He had a very small window to create a path for himself with a rousing indictment of Obama as keynote speaker at the 2012 GOP convention. If he had done that and made a point of supporting gun rights, he might have had an outside shot this cycle. Instead, he gave a long-winded recital of his own accomplishments, with a few shouts out to Romney and some barbs at Obama.

It was over for him after that. Clint Eastwood had a better chance at the 2016 nomination than he did.

If anyone had doubts about that, the effusive praise of Obama over the Hurricane Sandy response (which was, in terms of prepositioned supplies and equipment and speed of aid delivered, far slower than the Bush FEMA response to Katrina, contra all the media myths) sealed that deal forever.

Christie might make a good AG. He will never be on a national Republican ticket.