Life isn’t perfect? Get an abortion!

Life isn’t perfect? Get an abortion!

“Abortion is a part of life.” 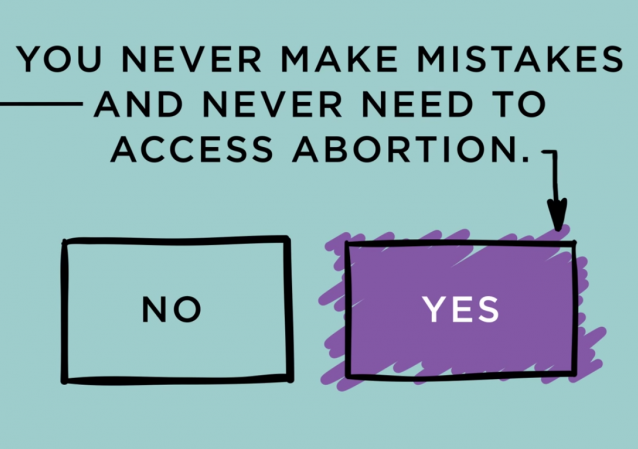 Of everything I’ve witnessed from the pro-abortion crowd this ad quickly took its place among the most disturbing. It’s not disturbing because it’s gruesome or gory or because it mocks pro-lifers — it doesn’t. “The End of Pretending” is uniquely disturbing because it seeks to make the senseless murder of an unborn child the solution to a less than perfect life.

“Let’s pretend that life is perfect and everything happens exactly as you plan,” the ad begins says. It goes on to paint what I suppose is a “dream” scenario of a perfect life. But because we all know that life isn’t perfect, you’ll probably need an abortion, suggests the ad.

In an interesting departure from the “reproductive rights” mantra, UltraViolet chose to call abortion a “productive” right; which makes sense if you view children as disposable glob of cells impeding the road to your dream job.

“UltraViolet is a powerful and rapidly growing community of people from all walks of life mobilized to fight sexism and expand women’s rights, from politics and government to media and pop culture. UltraViolet works on a range of issues including health care, economic security, violence, reproductive rights, racial justice, and immigration by putting the voices of all women, especially women of color and LGBTQ women, front and center.

Sexism is everywhere. At UltraViolet, we combine innovative, cutting-edge organizing with grassroots, people-powered actions to fight for equality and progress,” says their website.

Run mostly by MoveOn.org alum, UltraViolet runs campaigns against SNAP reform, insurance companies, and a TLC reality TV show… when they’re not peddling murder as a viable life solution that is.

There appear to be two other ads in UltraViolet’s “progressive rights” campaign. “I like being in charge of things that affect me financially and abortion access is one of them. Because access to abortion is an economic issue and I’ll fight to protect my economic rights,” another ad says.

Evidently, I’m not the only one who finds these ads off-color. According to a petition on UltraViolet’s site, Google, Hulu, and YouTube are censoring the ads:

Pretending the murder of an unborn child is an economic right or the key to success definitely doesn’t pass the “family safe” test, nor is abortion simply “a part of life” (though the irony of calling infanticide part of “life” seems to be lost on UltraViolet).

Why do people call for productive or reproductive rights when their entire focus is not reproducing and that by any means necessary?

If UltraViolet wants to expand women’s rights then they must let the unborn female expand from conception to mature adulthood. That way the unborn females will then become cognizant of their rights.

What happened to their algorithm you ask? Don’t think for a second that these big Silicon Valley firms are simply using predictive analytics to market products to you. They’re pushing their progressive agenda on you, and using A/B testing and other analytic techniques, perfected by the marketing industry over decades, to effect social change. Their “free” platforms make you (and your children) sitting ducks.

The shelter magazines started this a while ago. First, the lovely decorating job; next, the gay men who live in the house are mentioned by name in the text accompanying the story. Later, stories appear with the gay couple as part of an entertainment tableau. Now it’s front and center…gay couples of all stripes living wonderful lives that the magazine reader can only dream about. It took a few years, but now it’s in-your-face. It took Southern Living longer to feature black couples in their spreads–and I raise that not as a race issue but as an agenda issue. The gay lobby worked much more quickly, and effectively.

The logical extension of all this, is that millenials will want a ‘do-over’ of their lives. Best of luck to them.

Tell them that in their middle years, they be comforted by using their iPad 200s to watch re-runs of Obama playing golf, John Kerry riding a bicycle, Al Gore counting his climate change money, or Hillary Clinton keeling over and dropping-dead during the first 2016 presidential debate.

IF you are schtupping like a mink, and you have a “mistake”…

you are doing it wrong.

There are MANY ways NOT to become pregnant. If NOT being pregnant is important to a woman, she has no excuse for not using ALL of them.

Including not schtupping like a mink. Continence is a good word, and a better practice.

Self-moderating, responsible behavior is a downer. Stop ruining the mood. Stay groovy and abort. Selective-child policy is totally different from…

I wonder if that’s why they stopped criticizing the Chinese human rights record. The response must have been: I know you are a sanctimonious hypocrite.

The interesting point about these ads is what it does not say, or assumes out of existence: that abortion is an ethical or moral issue. (also that it improves women’s lives, in the long run)

“that it improves women’s lives, in the long run” is what it assumes.

I doubt if any poll will demonstrate this, but I suspect that the majority of women dislike abortions, but want that option open “just in case”. Especially if they have daughters.

…”just in case” their daughter needs to abort their grandchild.

Lots of things are just “a part of life”.