Lamest progressive “oppo” get ever?

Lamest progressive “oppo” get ever? 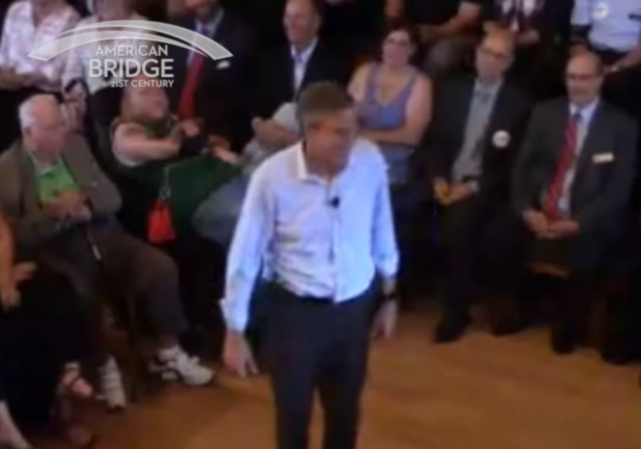 The progressive opposition research machine/PAC thing, American Bridge, is wetting their britches over what might be the absolutely lamest “gotcha” video I’ve ever seen.

American Bridge describes itself as a, “progressive research and communications organization committed to holding Republicans accountable for their words and actions and helping you ascertain when Republican candidates are pretending to be something they’re not.”

They send trackers to all kinds of meetings in the hopes of catching a Republican candidate or politician spilling their deepest, darkest, Koch-funded secrets.

The super secret Jeb video was described as follows:

Only a day into his official campaign for president, Jeb Bush fielded a town hall question about Social Security. And it didn’t take him long to slam the critical seniors’ program.

Then he started talking about his brother — the brother who, as president, notoriously went all-in trying to make partial Social Security privatization happen.

And not to leave any question lingering, Jeb made sure to note that “the next president” would have to try what his brother did again. This, from the guy who’s running to be the next president.

We caught it on video. You need to watch it for yourself and share this with your friends.

Their email blast was even more dramatic, “we caught Jeb’s Social Security attack on camera.”

At a town hall meeting in New Hampshire, Governor Bush was asked what he would do about the fact that the there will be no Social Security left for the younger generation.

“It’s a supplemental retirement system that’s not actuarially sound. Certainly Medicaid and Medicare are entitlements and they’re growing at a far fast rate than anything else in government, so it will overwhelm us. The contingent liabilities are clear. We can ignore it as we’ve done now. My brother tried and got totally wiped out. Both Republicans and Democrats wanted nothing to do with it. The next President is going to have to try again,” Governor Bush explained.

Fix entitlements! HOW DARE HE?!

In a past life I work as an undercover reporter. I later went on to plan and manage investigations. I worked with some of the best in the business. In a bunker in New York, we screened hundreds upon hundreds of hours of footage for anything, even the smallest phrase that might be noteworthy. This wouldn’t have warranted a rewind.

Jeb agrees with Barracula, who promised to tackle the huge threat of entitlements.

But he was lying. Suprisebus, supriebus, as we say in Latin.

How ya say “one party state” in latin?

Took me a minute to parse your statement… I misread it as “Barracuda” and thought you were talking about Sarah Palin.

Might want to leave the “k” in his name if you’re going to keep using the term. 🙂

In a past life I work as an undercover reporter… This wouldn’t have warranted a rewind.

Don’t forget that on social media dominated by leftists, this video will reverberate until the 2016 election with unlimited rewinds.

For lefties, math is hard.

I must be one of the “stupid” ones as I never got what the issue was and if fact I liked the idea that 15% of my SS contributions would be set aside in a real “lock box” (not the lock box of Al Gore fame that does not actually exist) that would be available to my family even after I expire. The MSM crucified Bush for that and I never, never understood a) why and b) how they were allowed to get away with that as it was a simple, fair idea that improved things for everyone and hurt no one.

It seems like the contract for American Bridge doesn’t contain anything measuring quality. They’ve beome like public school teachers.

Jeb Bush didn’t say he would fix it the same way his brotehr proposed to fix it. Now the W fix made no sense.

Social Security was not supposed to be acturalily sound because economic growth rates were projected to be very low. The remedy was investment. But stock market prices do track the economy over the very long run.

That said, there is nothing wrong with some private investment of Social Security taxes. yes it takes money from Social security but socxial security is way over funded if we can get back historical rates of economic growth.

And that’s not counting the gains to GDP from increased immigration, as Jeb Bush knows better than most anybody. (Although he thinks some kinds are much better than others, which is actually true. What makes him think he could get a law through Congress without strong arguments countering some basic assumptions some people have I don’t know)

I dunno… I don’t think this is anywhere near as lame as one of the attacks on Rubio.

“And then, when he came into some money, he paid off his student loans and then splurged on a boat! The horror!”

American Bridge is funded by Soros and run by David Brock. Truth is neither their strong suit nor their goal. Just as with the Rubio traffic tickets and boat, it’s all they can find on Jeb. They go with what they have, knowing most Democrats will accept the headline accusation without bothering to check details.

Hillary’s only hope is getting the same stupid and uninformed idiots out to vote who came out for Obama twice. They won’t do it for her, her ideas, or her promises, so they must be turned against all Republicans the same way Obama poisoned the well against Romney while we battled out a primary campaign.

If they have anything actually serious against any Republican candidate, they are locking it in a vault and keeping it as secret as they can.

It will only be released later, during the real campaign, at a strategically valuable time. (i.e. when the Dems need to change the subject, change momentum, etc…0

Remember the silly “47%” tape? That they sat on for months and months? And then spun into a “Gaff” that really hurt Romney?

They’ve got things they think they can spin hysterically on all our guys. Brace yourself — it’s going to be ugly.

They’re going to wheel out some guy who sort-of kinda knew Walker in college and heard a nasty rumor about why he dropped out. And he’ll do the circuit of all the serious news shows, and then the talk shows for the LIV voters.

They’re going to be slamming Jeb for that bill he signed that made it harder for women to put their babies up for adoption — they’ll have a parade of actresses/interns pretending to be women who killed their babies because of him and now they wish they hadn’t.

It’s going to get ugly, personal, and unbelievably unfair.