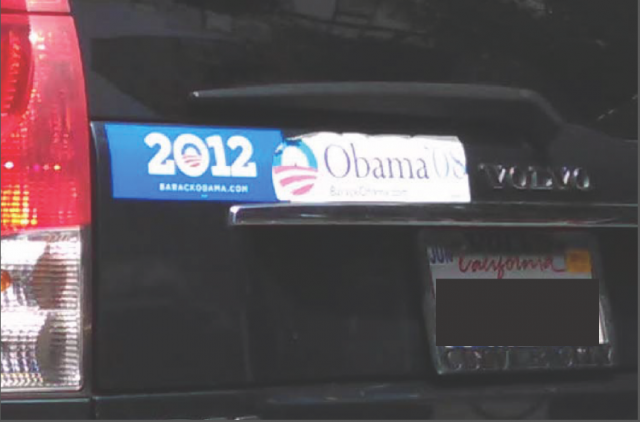 I returned to La La Land.

Just before taking the drive up to Santa Barbara for a small get together of faculty sponsored by the Young America’s Foundation. We’re taking a tour of the Reagan Ranch on Saturday.

Spotted the bumper sticker in the Featured Image while still in L.A. As I said three years ago, OMG, it really is La La Land. 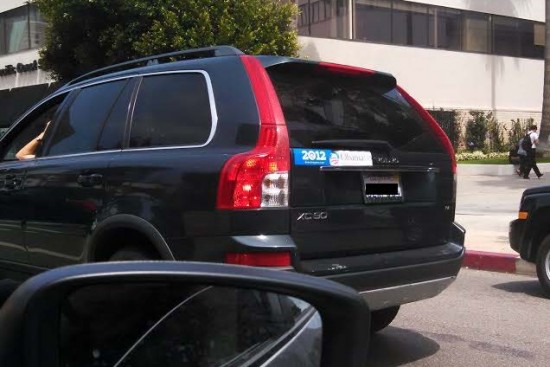 Takes a special kind of person to keep both ’08 and ’12 Obama-Biden bumper stickers on the car. I take that back. It takes a completely not-special person

The good news is that I had a chance to reunite with frequent Legal Insurrection commenter LukeHandCool.

We both wore shades indoors so no one would recognize us. 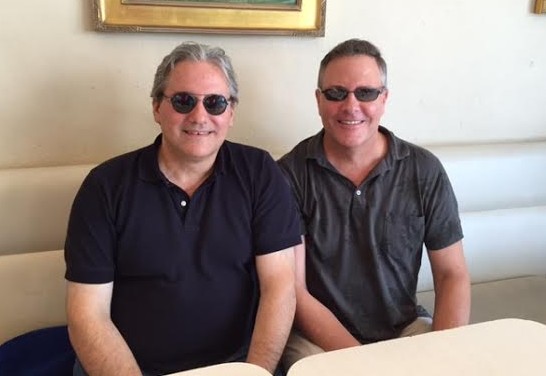 You guys could self identify as brothers.

At least there is no Hillary sticker on that car. Looks like a white female driving, probably on her cell phone, judging from the bend in her arm.

“You guys could self identify as brothers.”

Could? If my memory serves me correctly, Bill has told me numerous times he considers me the bratty twin brother he always wanted and never had while growing up.

I put my arm around him with my hand resting upon his right shoulder, just like brothers, before Mrs. Jacobson snapped this picture, the second one.

I tried not to show the hurt and thought, “I guess he doesn’t think we’re at the brothers stage yet.”

“It didn’t look good in the first picture.”

Oh. Got it. Feelings not hurt anymore. A political blogger has to be thinking about optics at all times.

Each time he visits L.A. he takes a little bit more of L.A. with him. Look at the shades indoors.

And I was so relieved he wasn’t wearing over-the-calf dress socks with his short pants this time.

He’ll be going native before you know it. Before you can say, “Rachel Dolezal is my Guru,” he’ll be making a scene in the restaurant, yelling, “I’m not going to sit here and eat with a racist, sexist, homophobic conservative nut job!”

Elegant, charming, beautiful, and completely down to earth in the sweetest way.

LukeHandCool (who, with the Jacobson’s departure, is once again left friendless and lonely in L.A., and who, truth be told, only wears shades indoors when the tourists are visiting him and are eager to partake in the “I feel like a major player in Hollywood” experience, and who is relieved that at least one of the two is not star struck with herself and doesn’t go to the silly length of wearing shades indoors on an overcast day)

Outside of LaLa Land I’m seeing more and more bumper stickers espousing small government and defense of the Constitution… you know, in the part of California I once saw described on the LA Times website as “San Diego would be great if it wasn’t for that creepy Republican vibe.”

Never see conservative stickers on my side of town.

But, over the last seven years there’s been a very noticeable drop in the number of Obama stickers you see.

Did you issue the Prof his official California footwear? Or are flip-flops for every occasion only acceptable outside of LA?

As white as his legs are, I give him credit for his courage to walk around in surfer shorts out here.

The Birkenstocks with white crew socks, while still cringeworthy, were a big improvement over the over-the-calf black dress socks with black wingtips (okay so far) but paired with turquoise Aloha shorts … Gawd. I mean, it is okay to just go ahead and wear a suit out here. It’s not unheard of.

At least the Birkenstocks show he’s transitioning to West-Coast casual. The problem is, it’s still Northern West Coast … up around Berkeley and Santa Cruz.

And when he starts up with the surfer lingo … “Malibu this morning, man. Glassy point break with tasty five-foot faces and southeasterly swells …” the stares from the other diners.

I just can’t bear the stares.

Are you sure you’re from out here? Surfer shorts? Indeed! Board shorts! Even trunks or swimming trunks. Never surfer shorts.

You and I know them as board shorts.

But I didn’t think the rest of the audience, in the regions outside of SoCal (or as I say, “The Wasteland”) would recognize the term.

Just as Gidget exercised a little poetic license in making surfing intelligible to inlanders in the late 1950s, so, too, do I have to tinker and tweak again and again to turn Bill into a laid back surfer dude. I have to make things immediately understandable.

Doing this makes me realize just how hard it must have been for old Hollywood hands to transform “Fancy Man” Rock Hudson into a hetero-Playboy. It ain’t easy.

We both wore shades indoors so no one would recognize us.

This place is not even a half block from our apartment.

“Oh … no you don’t … we heard you and your friends talking last time … your business isn’t wanted here.”

Truly the land of nuts & fruits. But I am a big fan of the KFI radio station via Iheart.

Must be nice to have more money than brains. Those stickers have been baked into the car’s paint job. Insurance companies should increase policy costs for drivers who do this.

No doubt in my mind, the owner of Volvo is a Democrat party or NAACP operative, and/or someone who makes their living off the taxpayer.

you meet up with him twice, and never even let me know you were in town… my lawyer will be in touch.

here in my part of the Valley you see that all the time, plus recent sightings of Elizabeth Warren and Shrillery! stickers as well…

no photos: i has dumb phone, no can share pictures. 🙁

I’m only half kidding when I tell you Bill has a bit of social phobia going on like me.

So we can commiserate. Mrs. Jacobson, however, has that fluent natural charm and makes socializing look so easy.

I noticed that, too.

Now, if it was a DeLorean sporting a flux capacitor….

…another terrible step toward the creation of “Billy Hollywood, Blog Star”….

Whaddya expect? It’s L.A., the land of fruits and nuts.
Great picture of you guys! It’s nice to put a face to a name. 🙂

The sweetest part of the picture is the stickers are on an SUV. You should have accosted the woman about her carbon footprint.

Great to see both of you, and to put a face with the name.

Now, guys, where’s the picture of the two beautiful, charming, outgoing, accommodating spouses who allow you two to spend hours in front your keyboards?

(BTW, is plural of spouse “spouses” or “spice”? Mouse/mice, louse/lice, spouse/spice…. After all, they are the spice of your life!)