The return of compassionate conservatism? 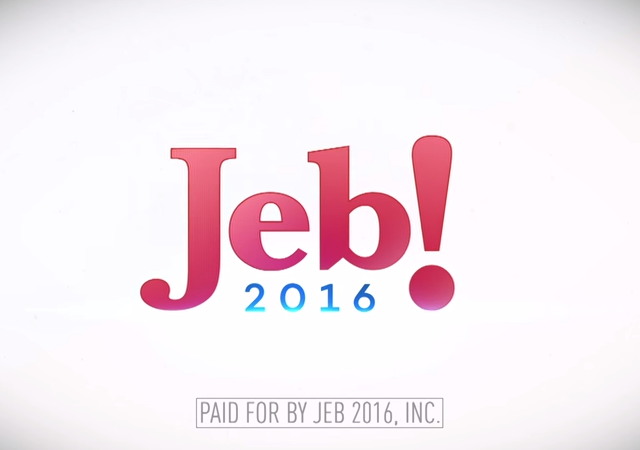 Jeb Bush is expected to announce his run for president tomorrow, and his team has already released their first video and are touting it as Bush introducing himself to the American people.

The spot focuses on Bush’s time as governor of Florida and hits specific notes on women, minorities, the disabled, education, and jobs.

Take a look below, hat tip to The Shark Tank:

We decided to use the campaign logo as the featured image of this post because there’s been some buzz about it on Twitter.

This offered up as Twitter-joke, but actually works better than original logo & Jeb can pull it off authentically too pic.twitter.com/nlAVudmD66 — Jeff [email protected] (@EsotericCD) June 14, 2015

I’m trying to screw my enthusiasm up to “meh”.

You’re being too wishy washy!

The proper response is: “Hell No!”

I’m sorry. He doesn’t even rouse in me the enthusiasm required to press the “shift” key in order to create an exclamation mark. Just, no.

Join me, Amy. From now on I will add something different every time I post the name:

I voted for Jeb! three times for governor. I will not vote for him again because of Common Core and his stance on immigration.

I won’t vote for Bush for a dozen reasons, but mostly because he has already told me, because I’m a conservative, that he neither wants nor needs my vote. Well, alrighty then! Not a problem!

Cool! Jeb announced he is running for President. Cool!

What party? Did he say?

His team is still doing the internal polling and will decide on which party before the GOP debates in August.

For the love of Humanity! This country does not need a family oligarchy! We don’t need the Clinton Crime Family either.

Say NO to Bush. Say NO to Clinton.

Elect someone who will put this country back on the right track.

You’re correct! Plus, no more Adams or Harrison’s or Roosevelt’s either.

I suppose if it’s Jeb versus Hilarity I’ll hold my nose good and tight with one hand and vote for Jeb with the other.

But I’m really, really hoping it doesn’t come down to Jeb versus Hilarity. God gawd what an awful choice.

Meet the new Jeb. Same as the old George.

Look forward to the video introducing his exit.

I supported Bush senior. No regrets.
To this day, I will occasionally send up a prayer of thanks giving that GW was POTUS on Sept. 11, 2001. He did some things during his 8 years which I vehemently opposed and some things which I will never understand. But I will never regret voting for him in 2000 and 2004; and, I so miss the grace and dignity that First Lady Laura conferred upon the White House.

I supported Jeb throughout his tenure as Florida governor. He can claim credit for some advances in the area of education, specifically in his opposition to affirmative action & quotas in college admissions. BUT, that was then and this is now and the stakes are immensely higher.

All of GW’s areas of weakness are magnified 10 fold in Jeb.
He and those with whom he surrounds himself have expressed a disdain for Americans which is utterly unforgivable. Spare me and my countrymen from your Casper Milktoast Compassionate Conservatism, please.

If the GOP finagles to put Jeb on the ticket in 2016, I’m staying home. Never, never, never said that before but I’m done supporting the faux conservative candidates who become Benedict Arnold once they get elected.
(And that goes for your little dog, Marco Rubio, too!)

And? When 2016 rolls around the Internet will be more of a powerhouse than the NY Times, CNN, and the nutworks, all rolled together.

I’m waiting for the “two fer” ads. With Hillary you get Bill. And, Drudge will with run Monica’s opinions. The GOP, today, with the Orange Drunk, and the Chinless Wonder, are the wrong people to head a party where people vote!

Argh. No edit button. *Fixed it for you

But there is a preview button. Slo dow. Hast make wast.

Perview is my fiend.

As they say in my illegal immigrant filled neighborhood, “No way, Jose!

….Or, to use the words of Jeb’s dad (here comes my impersonation of Bush senior)
Read My Lips.
Naaaaaagunnadewit.

No support for Jeb Clampett or any other Kennebunkport-ideology Hillbillies here.

Jeb speaks with all the force and passion of a wet sponge.