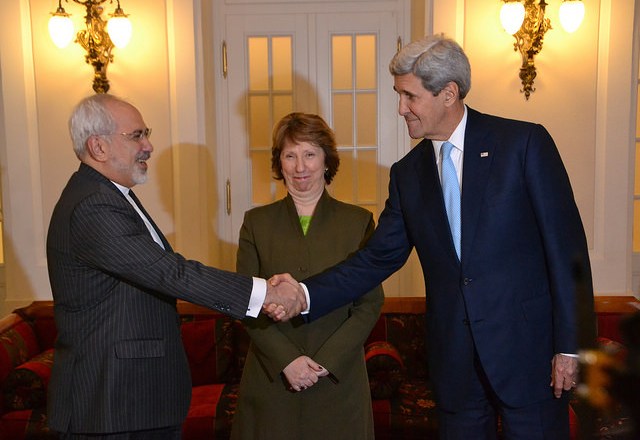 Two stories reported yesterday raise questions whether the Obama administration is willing to devise a deal that will be comprehensive to prevent Iran from developing a nuclear device and even if it could, would it have the will to enforce it.

In the first case, Jay Solomon of The Wall Street Journal reported (Google link) on the secret dealings between the Obama administration – going back to 2009 – and Iran. The dealings, facilitated by the Sultan of Oman, raise serious questions about how President Barack Obama is going about his nuclear negotiations. (By the way, remember that Obama was silent during Iran’s stolen election of 2009 that returned Mahmoud Ahmadinejad to power. Presumably he didn’t want to upset his negotiating partners.)

The early negotiations were, in effect, prisoner swaps. The United States and Britain had jailed Iranian nationals for smuggling prohibited items to Iran. Iran wanted the smugglers returned. On the other side, in 2009, three American hikers had strayed into Iran and were imprisoned. The United States saw that the Iranians, who had violated the law, were released quickly. (In one case it appears that an Iranian woman was released early; in other cases their deportation hearing was expedited.) Eventually the three hikers were released, after Oman paid approximately a $500,000 bond for each – essentially a ransom payment. One of the hikers called the releases “goodwill gestures” which the Journal characterized as “help[ing] build momentum for the secret nuclear negotiations.”

By the time the nuclear negotiations had started, former Marine Amir Hekmati would be imprisoned on espionage charges. (He was originally sentenced to death, but his sentence was reduced to ten years.) Subsequently Iran also arrested a Christian pastor, Saeed Abedini and the Tehran bureau chief for The Washington Post, Jason Rezaian. For some reason or another the serial hostage taking of American citizens didn’t put a damper on the administration’s enthusiasm to negotiate with Iran.

According to the Journal the first nuclear negotiations in 2012 were “largely a failure.” However subsequently, thing got moving. The Journal reported that “[t]he Obama administration initially called for an end to Tehran’s nuclear fuel production, a dismantling of many of its facilities and a rollback of its missile program—goals that have been dropped.” Again we have an example of the administration allowing Iran to dictate the terms of negotiation.

In both cases it appears that the administration was determined to do whatever is necessary to accommodate Iran. (Read Lee Smith’s Obama’s Unicorn Deal With Iran for full documentation of the administration’s capitulations over the past year and a half.)

Last week, Iran’s Supreme Leader Ayatollah Ali  Khamenei gave a speech (he also tweeted the main points so no one could doubt his intent) refusing to limit Iran’s nuclear research, refusing inspections of military sites and demanding immediate sanctions relief – in effect repudiating the understandings reached in Lausanne nearly three months ago. Despite this the administration is willing to let another deadline – June 30 – pass with no consequences to Iran.

Some people noticed. France noticed. So did The Washington Post, The Boston Globe and the New York Daily News. All declared Khamenei’s demands unreasonable. Today it’s been reported that the United States has raised similar concerns with Iran. It remains to be seen if it is willing to walk away if Iran doesn’t budge.

The administration’s goal is to seal a deal by July 8, so that Congress will only have 30 days to review the bill and not 60 according to the terms of Corker-Menendez bill. (The administration is willing to give Iran, whose leaders say “death to America,” extra time; but want as little scrutiny of the deal as possible from the media and the legislative branch.)

Aside from the article on the administration’s nuclear diplomacy, a second report (Google link) in the Journal raised questions about how effective a deal could be based on precedent. The second article reports on the possibility that after an international regime was implemented to rid Syria’s President Bashar al-Assad of his chemical weapons arsenal, he may still have some that he would be willing to use if he became desperate for survival.

Analysts and policy makers have been poring over all available intelligence hoping to determine what types of chemical weapons the regime might be able to deploy and what event or events might trigger their use, according to officials briefed on the matter.

Last year, Syrian President Bashar al-Assad let international inspectors oversee the removal of what President Barack Obama called the regime’s most deadly chemical weapons. The deal averted U.S. airstrikes that would have come in retaliation for an Aug. 21, 2013, sarin-gas attack that killed more than 1,400 people.

Since then, the U.S. officials said, the Assad regime has developed and deployed a new type of chemical bomb filled with chlorine, which Mr. Assad could now decide to use on a larger scale in key areas. U.S. officials also suspect the regime may have squirreled away at least a small reserve of the chemical precursors needed to make nerve agents sarin or VX. Use of those chemicals would raise greater international concerns because they are more deadly than chlorine and were supposed to have been eliminated.

Doubts that the Organization for Prohibition of Chemical Weapons (OPCW) had actually removed all of Syria’s chemical weapons have persisted, even after the job was said to have been done.

Most recently, last month the OPCW reported that it found traces of chemical weapons at previously undeclared sites. In addition, while Assad may have been deprived of his deadliest chemical weapons, he was willing to improvise using chlorine bombs on civilians. (Chlorine, which has civilian uses, is not a prohibited chemical weapon, however its use as a weapon violates international law.)

But enforcement of the deal has been non-existant as a Wall Street Journal editorial noted earlier this year, “[t]he 2013 deal with Russia always lacked enforcement teeth, since any Syrian violations of the agreement would have to be referred to the U.N. Security Council, where Moscow and Beijing have reliably protected Assad.”

The problem about undeclared sites and enforcement of nuclear deal that relies on Russia and China would exist with a nuclear with Iran too.

When he announced the deal that averted an American military strike against Syria, Obama said:

This framework provides the opportunity for the elimination of Syrian chemical weapons in a transparent, expeditious, and verifiable manner, which could end the threat these weapons pose not only to the Syrian people but to the region and the world. The international community expects the Assad regime to live up to its public commitments.

Obama frequently uses the word “verifiable” when speaking of the nuclear deal with Iran. But the example of the chemical weapons agreement with Syria shows how hollow that word is when dealing with a rogue regime. Obama’s false confidence in the international community’s ability to know everything that’s going on in countries dedicated to cheating coupled with his eagerness to make a deal does not bode well for the emerging nuclear deal with Iran.

The job of ensuring Iran’s compliance would be difficult enough if the deal was thorough and there was the will to enforce its provisions. But the administration’s history in its negotiations with Iran and its dealings with Syria suggests that neither condition exists.

The Obamic Decline is apparently an attempted suicide, with many facets.

It’s timed to reach maximum lethality in a few years…after Barracula is safely out of Dodge.

“Obama frequently uses the word “verifiable” when speaking of the nuclear deal with Iran.”

Here we have the Communist-educated, Muslim-loving al-Chicagi and the traitorous Navy Reserve Lieutenant who collaborated with American enemies during the Paris Peace Talks. Both have an implacable hatred for Israel (probably because Bibi has 10x thecourage in his left little toe than they do) Is there any wonder why these two spaghetti spined clowns want to see Iran pop a nuke?

Iran and Cuba are 2 radical regimes countries that have stood up to the man US. Prez is radical too so wants to give iran nukes now and Cuba in future. Sounds crazy but just look at such as reparations for the grief US has given iran Cuba over the last 50 years or so and the capability to stand up to the man in future. kinda like to community organize internationally.

Enough already! Obama and Kerry & Co. should hand the Iranians the paddle, assume the position, and repeat, “Thank you Sir, may I have another?!”

The Iranians must feel like spoiled, modern-day Japanese princesses wondering whether or not to accept their boyfriends’ dogeza apologies:

Given Barack Obama is a traitor, why wouldn’t he be excited about giving Iran nuclear weapons?

Or has is his treason not yet ‘settled?’

So these two reports create doubts?

Odd. Even an older chap like me only needed two words when the negotiations were announced in 2013 to know the deal would be a complete surrender to the mullahs.

They were “Obama” and “Kerry.”