ICYMI: “We don’t yet have a complete strategy” to defeat ISIS

ICYMI: “We don’t yet have a complete strategy” to defeat ISIS

What has he been doing all this time? 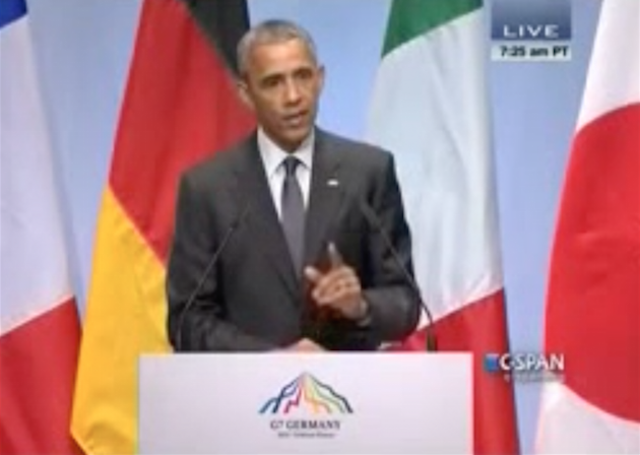 Unless you’ve been living under a rock for the past year, you already know that the Obama Administration is and has been under fire over what critics cite as a lack of commitment to defeating ISIS in the Middle East. Last September, Obama laid out a bare bones plan that he believed would help defense officials “degrade and ultimately defeat” ISIS; but since then, the effort to destroy the insurgency has met with setback after setback, causing analysts and critics to label American efforts in the region as “timid” and doomed to fail.

Today during his closing remarks to the G-7 conference in Germany, President Obama hedged once again against questions about what, if any, plan the US has to help Iraqi forces defeat ISIS:

“We don’t yet have a complete strategy because it requires commitments on the part of the Iraqis,” Obama said during concluding remarks at the G7 conference in Germany, citing recruitment as a key stumbling block facing the central government in Iraq. Critics of the administration’s strategy in Iraq seized upon the president’s comments Monday, claiming they indicated a policy failure and referencing similar comments Obama made in August.

I don’t think that anyone with even a rudimentary knowledge of the art of modern warfare would suggest that the current strategy is a failure simply because it hasn’t led to a thorough mopping-up of extremists in under a year. The problem we’re currently seeing is that what we’re hearing now is almost identical to what we were hearing when the Administration first began to address the intervention back in August of last year:

“I don’t want to put the cart before the horse: we don’t have a strategy yet,” Obama said of the effort to combat the militant group Islamic State of Iraq and Greater Syria (ISIS) in its safe haven in Syria. “I think what I’ve seen in some of the news reports suggest that folks are getting a little further ahead of what we’re at than what we currently are.”

Obama’s comment that “we don’t have a strategy,” delivered to reporters at the White House before the Labor Day holiday weekend, prompted immediate mockery from Republicans — not to mention quick damage control from the White House.
…
“We need to make sure that we’ve got clear plans, that we’re developing them,” he said. Obama said he’s ordered Secretary of State John Kerry to begin assembling a coalition to strike back at ISIS, while he has tasked Secretary of Defense Chuck Hagel and the Joint Chiefs of Staff to present him with military options. “We’re gonna cobble together the kind of coalition that we need for a long-term strategy as soon as we are able to fit together the military, political and economic components of that strategy,” Obama said. “There will be a military aspect to that.”

Right now, we have no “clear plans”; are we “developing them?” Maybe. The coalition is cobbled, but it’s also eating itself alive. US Secretary of Defense Ash Carter blames a “lack of will” on the part of the Iraqi forces for the widely-reported setbacks. Defense officials are currently working up a new support plan, but it’s not ready yet; judging from what Obama said during the G-7 press wrap-up, it may not even be drafted yet.

Obama’s “we’ll get there eventually” attitude with regards to controlling and eradicating ISIS isn’t just irresponsible; it’s indicative of his approach to just about everything that doesn’t easily contribute to his forced legacy of “hope” and “change.”

Unfortunately, if this plan ultimately fails, it’s not just Obama’s reputation that stands to take a hit.

Little boy Barack, being the closet Moslem — that he is, does not want to shut down ISIS. He wants them to help him take over as the world Dictator. I would not be surprised to learn that his secretly funding them and that the so-called bombing campaign that he says is being done against them are in all actuality are being done on the Kurds and other groups that are fighting them.

Methinks this is what is going on.

President Obama and his administration continue to support the global Islamist militant group known the Muslim Brotherhood. A White House strategy document regards the group as a moderate alternative to more violent Islamist groups like al Qaeda and the Islamic State….

The policy of backing the Muslim Brotherhood is outlined in a secret directive called Presidential Study Directive-11, or PSD-11. The directive was produced in 2011 and outlines administration support for political reform in the Middle East and North Africa, according to officials familiar with the classified study.

Efforts to force the administration to release the directive or portions of it under the Freedom of Information Act have been unsuccessful.

Likely true. But being this guy is no brain-trust, he let it slip, once again.

No game plan, eh? Does this moron realize it’s the middle of the 3rd quarter?

Yes, and this moron is ahead because he is being allowed to sabotage the US’s ‘bench’ right before everyone’s eyes.

Britt Hume said it best (and kindest) the other day: Time for Barack to put on his big boy pants and deal with it.

It’s also time for Britt to put on his big boy pants and report just who it is that is occupying the White House.

Barry says it’s the Iraqi’s fault that we don’t have a strategy. That can only mean that he still believes ISIS is the J.V. team, posing no threat to anyone outside of Iraq.

This is not encouraging.

Obama won’t have a plan for defeating ISIS even when cadres of ISIS jihadis are beheading American Christians in the central squares of American cities.
So don’t even ask. There is no plan, there will be no plan.
Obama needs to be removed from office now!

Of course there’s a plan! Why do you think so many foreign Muslims are being settled in the US?

“We don’t yet have a complete strategy because it requires commitments on the part of the Iraqis.”

No, honeee. You don’t have a CLUE. Complete or partial. None.

Before you could BEGIN to formulate a strategery, you’d have to bring yourself to flucking SAY the term ISLAMISTS. To hold it in your poor, delusional brain as a concept in reality, and to appreciate YOUR nation is GOOD, and they are very, very BAD.

For my money, I’ll bet you never make the cut.

America elected a wussy for President. Now the whole world thinks we are wussies.

That’s the thing about leadership, or lack of it.

Maybe the strategy is incomplete, because it’s still playing out (?)

Maybe it was the Muslim Brotherhood that paid for the president’s education (see Vernon Jarrett’s piece from 1979), and Obama’s strategy is to let ISIS run free in the ME, and, when things get bad enough that they’re all crying “uncle”, help the Brotherhood take control.

Or maybe not. But it would make a good movie.

What has he been doing all this time?

Boehner is really a tough guy.

And we’re about as ‘tough’ as Boehner, because we tolerate his extorted ass.

It’s part of The Legacy of the Nobel Prize winner. This mook will not go to war for any reason to keep a personal promise made to anti-war lefties.

He’s punting ISIS to the next administration. Ukraine, too. And every other damn foreign policy mess he’s created as well.

Two weeks ago, courtesy of the investigative work of Nafeez Ahmed whose deep dig through a recently declassified and formertly Pentagon documents released earlier by Judicial Watch FOIA, we learned that Western governments deliberately allied with al-Qaeda and other Islamist extremist groups to topple Syrian dictator Bashir al-Assad. In his words: “According to the newly declassified US document, the Pentagon foresaw the likely rise of the ‘Islamic State’ as a direct consequence of the strategy, but described this outcome as a strategic opportunity to “isolate the Syrian regime.”

… if true (and it seems to be), this is probably the biggest non-military operation by the US government in the Middle East since the CIA help topple Mossaddegh to put the Shah of Iran on his throne.

Actually we did have a plan to defeat Muslim fundamentalists in Iraq. It was called “The Surge” and it was executed successfully by the Bush Administration who left you with a stable county, you jug-eared moron. You screwed the pooch on Iraq, just like you did on just about everything else. Idiot.