How men and women differ on sex and relationships

How men and women differ on sex and relationships

Despite gender fluidity’s fifteen minutes of progressive fame, men and women still hold differing opinions on what is “morally acceptable” in the confines of a romantic relationship.

Polling released by Gallup Monday showed that the spectrum of “morally acceptable” behaviors has grown, but a crevasse splits men and women on issues like pornography, divorce, polygamy, extramarital affairs, and oddly, having children out of wedlock.

Women are more accepting of having children outside of marriage and divorce. Women too, are less likely to find homosexuality morally unacceptable. 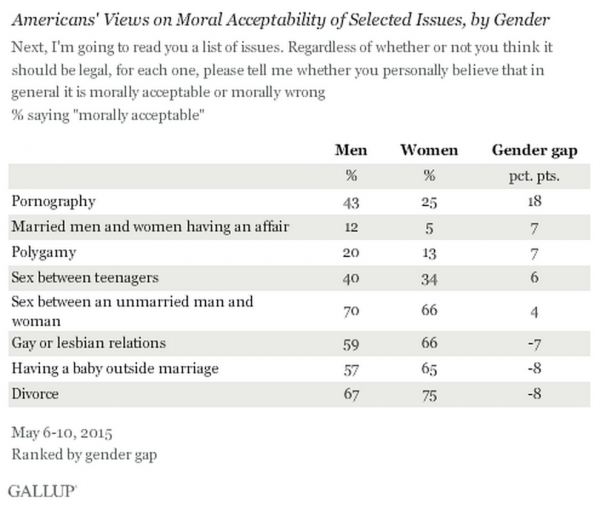 These findings come from Gallup’s May 6-10 Values and Beliefs survey, which is the latest update of a poll that has documented the changing social mores of the country since the early 2000s. This year’s survey found a general nationwide shift toward acceptance of once-controversial issues, and even small increases in behaviors widely regarded as morally taboo.

Interestingly, men were slightly more likely to view polygamy and affairs as morally acceptable. Even among men open to a swinging lifestyle, the overall percentage was low. 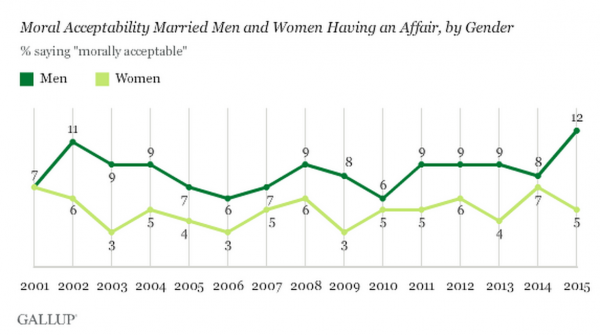 Within Gallup’s poll, there were two other deviating issues: divorce and kids out of wedlock. In both cases, women were more accepting, though not by much. 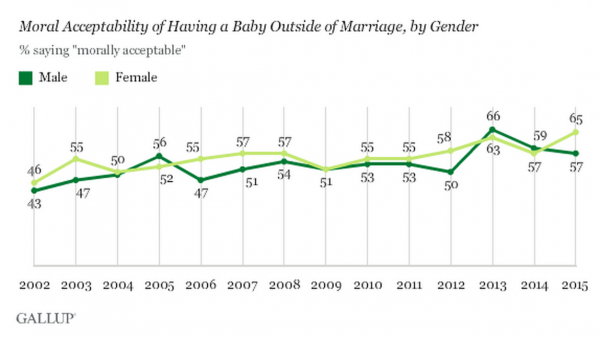 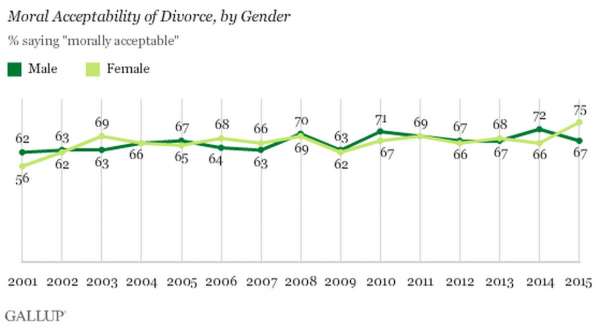 Is the growing acceptance of divorce and having babies outside of marriage an indicator that the family unit is dying?

Several indicators suggest that while ideas about marriage may be changing, the family unit itself is not in its death throws. At least not yet anyway.

Last year, the New York Times published an article illustrating that while divorce rates peaked in the 70s and 80s, divorce rates have actually declined in subsequent decades. Yet for some reason, the “half of all marriages end in divorce mantra” is still a foundational part of relationship lore.

Despite hand-wringing about the institution of marriage, marriages in this country are stronger today than they have been in a long time. The divorce rate peaked in the 1970s and early 1980s and has been declining for the three decades since.

About 70 percent of marriages that began in the 1990s reached their 15th anniversary (excluding those in which a spouse died), up from about 65 percent of those that began in the 1970s and 1980s. Those who married in the 2000s are so far divorcing at even lower rates. If current trends continue, nearly two-thirds of marriages will never involve a divorce, according to data from Justin Wolfers, a University of Michigan economist (who also contributes to The Upshot).

The NYT argued there were several reasons for the declining divorce rate, among which were the increase in the average marrying age, the decline in overall marriage rate, marriage for love (a convenience of modernity), and birth control.

The median age of a first marriage has seen a steady increase over time as data by the Census Bureau illustrates. Waiting until later in life to marry doesn’t guarantee success, those getting married after experiencing the “real world” are better poised to navigate the difficult waters of marriage, and more likely to understand what they want and need in a mate. 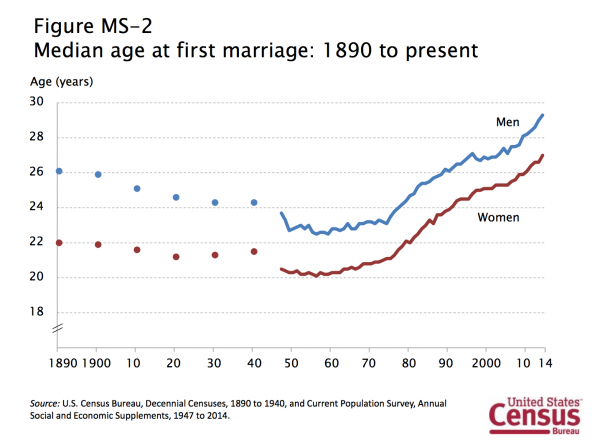 Cohabitation prior to matrimony is also a contributing factor. Statistically, marriages following extended periods of cohabitation are more likely to result in divorce than those married without testing the living situation. It’s also true that a result of cohabitation is a relationship that ends in a breakup. The NYT explains:

Perhaps surprisingly, more permissive attitudes may also play a role. The fact that most people live together before marrying means that more ill-fated relationships end in breakups instead of divorce. And the growing acceptance of single-parent families has reduced the number of shotgun marriages, which were never the most stable of unions, notes Stephanie Coontz, a professor at Evergreen State College and author of “Marriage, a History: How Love Conquered Marriage.”

Not considered by any source I’ve found thus far, is that the increase in acceptance of divorce is arguably correlated with the fact that the children of the peak divorce era of the 70s and 80s, now adults themselves, have a different understanding of divorce and subsequently marriage as a result.

As Gallup pointed out, “the differences between men and women are mostly a matter of degree rather than of kind.”

Marriage law is based upon partnership law. When you break up both partners get 50%. What happens if you have 4 partners and someone leaves? Do they get 50% or is it divided by the number of partners.

A poly marriage would have to be based upon Corporate law. And, states could require a cash bond, a board of directors and regular reports to the Secretary of State.

A corporate relationship would neatly accommodate the classification of human life as a commodity that is negotiable (i.e. class diversity) and disposable (i.e. elective abortion) when it is deemed inconvenient or unwanted by a female officer. It would reduce the need and overhead of Planned Parenthood and similar lobbying businesses for the abortion industry. It would also remove a leg from the Democrat stool, but the sacrifice would be minimal, and the Party’s reputation would remain tarnished.

On the other hand, partnership law does indeed mate (no pun intended) just as well with polygamous marriage (multiple partners) as it does in a 2-partner marriage.

The real problem coming up next under an Obama presidency is the manifestation of the liberal/left’s embrace of pedophilia. The logical next step after a New Yorker cover of a pedophile kissing his or her child lover would be legalization of sex with children. Next would be marriage to children. The problem then is the capacity of the minor child to consent to the marital relationship. And what if a pedophile wants to marry multiple children? And what if two children want to get married? What if a bunch of children want to get married?

The next step before Obama is out of office, will be the legitimizing people marrying their dogs. This will raise the problem of consent: can a dog really knowingly consent to a marriage proposal? Even once married, can a dog consent to a divorce?

Of course the final frontier before Obama leaves office will be legitimizing people marrying their siblings. Partnership, corporate and consent issues will be no problem, but in a generation or two, the offspring will be too insane to capable of anything. Perhaps one of them will become GOP Squeaker of the House.

Don’t want to limit anyone: they could also easily become GOP Chairman.

That may be one of the stupidest things written on LI in a long time.

Starting with your original assertion regarding partnership law and marital law.

Plus, you can form a partnership with any number of partners.

I am not really suggesting this. But what I am saying is that we do not have a precedent for poly marriages in law. States will have to spell out the legal protections and rights of all involved. Community property and child visitation rights after divorce would be huge unknowns.

And yes, states could treat poly marriage as a partnership with multiple partners. But they could just as easily require a cash bond and a board of directors. Because – in this case marriage is a contact and not an institution.

Is polygamy multiple marriage contracts or just one?
Is marriage between 1 man and 3 women made up of three single contracts between one man and one woman or one contract between all four?

Golly, I can think of a few more pressing problems.

Let’s start with the idea being POLYANDRY, not polygamy. You assume the later incorrectly.

You also make the mistake of assuming too broad an existence of “community property” law. It mostly exists in former Spanish territory states, since it derives from Spanish law.

There are people living under these relationships in the U.S. already without the formality of marriage, and family law courts sometimes have to deal with the dissolution of these arrangements now.

Well, being you brought of ‘stupid posts,’ you’re two for two.

The two most populous states in America (California and Texas) are community property law states. So are Washington, Wisconsin, New Mexico, Nevada, Louisiana, Idaho and Arizona.

But then, maybe you just trying out for the Onion.

So. I know a lot more about this than do you. Was I wrong about anything I said? No.

Some “parodies” should not be allowed to stand…especially if they are NOT identified as parodies.

But then, I guess you missed the follow-ups by the original poster?

Ragspierre, you replied seriously to a parody. Do you write the same critiques to Onion pieces?

I suggest your reply is one of the stupidest things written on LI. Ever.

It is easy to accept that which gives you substantial financial gain.

Looks like the gender differential roughly tracks how good/bad something is for each gender.

Significant majorities of both genders think it’s okay to have kids outside of marriage? Well, it may be the best of the available options once you’ve conceived (then again, it may not: adopted children do well afaik) but aren’t kids entitled to their father…? Sigh….

Raising kids together with their father is rough enough. I’m having a hard time imagining it without him.

It’s an interpretive ‘study’ based on a polling conducted by Gallup. Do not bet the rent on its findings.