“You can’t fake your way into the presidency.” 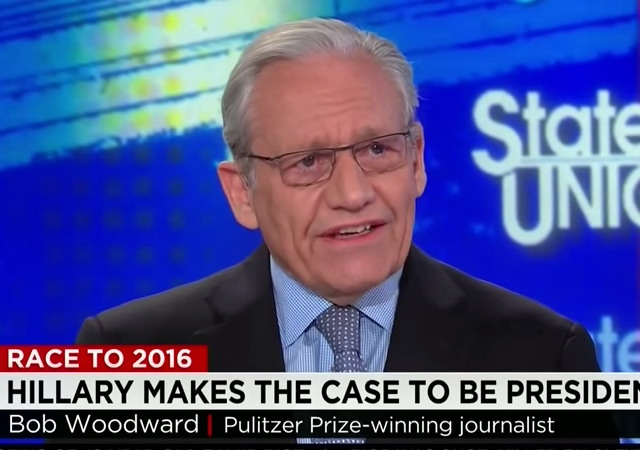 Bob Woodward appeared on CNN’s State of the Union program with Jake Tapper today and claimed that one of Hillary’s favorite sayings is “fake it until you make it.”

He also pointed out the fact that she has a trust deficit issue and that she hasn’t been forthcoming enough with the emails from her time at the State Department.

Here’s more from Blake Seitz of the Washington Free Beacon:

The Washington Post’s Bob Woodward laughed off Hillary Clinton’s reluctant disclosure of emails and foundation donors as “not enough” on Sunday’s State of the Union.

Democratic National Committee Vice-Chairwoman Donna Brazile mounted a peculiar defense of Clinton, claiming that she has “never seen a politician who has laid out more information about herself. We have read her emails, we have seen all the donors—”

At a recent fundraiser on Long Island, Hillary Clinton actually made a joke about her private email server.

Hillary jokes hackers couldn’t get through her server

Hillary Clinton joked about her personal e-mail server being more secure than White House computers at a Long Island fund-raiser.

At a $2,700-a-head Monday event at the home of Nassau County Democratic Chair Jay Jacobs, Clinton talked about cybersecurity and a recent breach of the White House computer system. She joked the White House would not have been hacked “had they been using my server.”

Cant’ fake it to the Presidency?

Hillary’s Campaign Makeover! She wants to capture some of that Barack Obama “black magic” (cue the Carlos Santana)

Donna Brazile is a vile, lying prog shill. She be-clowns herself every time she opens her yap.

These progs, they think they can tell the most outrageous, bald-faced lies and get away with it. We’ve never seen a politician reveal more information than Hillary Clinton? She deleted her memos (emails) after two years of stiff-arming congressional committees who were looking for the very information contained in those memos.

Sorry Donna, your prog base might buy that crap you’re selling, but the fact that you say shit like that makes you a vile, disgusting liar in my book.

The problem is the a-holes hogging the leadership positions of the GOP are taking notes as Brazille talks.

“Hillary Clinton joked about her personal e-mail server being more secure than White House computers at a Long Island fund-raiser.”

That is an *insanely* stupid thing to say on tape. If it ever comes out that any of the email on her private server were compromised, that line will be played at the beginning of every story on every news station forever.

We already know that sHrillary’s private email was hacked — by a private hacker, not a foreign government. But, if a private hacker found his way in, I think it’s virtually certain the Chinese and Russians have been there, too.

Why it works so well for the left is that the media (save for Fox, the NY Post, and talk radio) in our country is in their pocket. If it weren’t, there should be a laugh track in the background everything Obama or Hillary Rotten Clinon speaks.

Hillary’s campaign staff probably saw the hacker expert recently on Fox News who countered the host’s Hillary directed comment that a lone wolf server is probably unprotected by saying it is probably more protected than government computers. (Makes you want to give gov’t your medical info. NOT!)

American rule of law insists that Hillary must abide by the laws in place. She illegally kept a personal remote server as Sec. of State (to plan her legacy à la Clinton/Whitewater style politics).

How can she even run for president? She is guilty of felony crimes against the U.S..

Yeah, I don’t get it. She’s not legally qualified to run for POTUS at this point, is she? She shat all over her Constitutional obligations as SoS, among countless other transgressions. The fact that the Dims would even consider her as a candidate speaks volumes about them. She’s damaged goods, in more ways than one. If she was a dog I’d suggest taking her down to the creek and putting a bullet in her head.

Will she exercise her duty of candor under Model Rule 3.3 when she appears at the Rep. Gowdy’s hearing?

Here’s some interesting reading for anyone who hasn’t already perused the statutes:

According to this LAW Frau Clitler is ineligible to hold any federal office … period. We all need to bombard our Congressional folks with phones calls, letters, and emails to point out this LAW and how it applies to Hillary. We don’t have to continue to put up with all the illegal activity coming from the Democrats. Obama’s eligibility for POTUS may be shaky but Hillary’s inelibility is clear!!

She’s soon going to wind up in the same candidate garage can as Jeb Bush.