For the love of America, stop making campaign songs 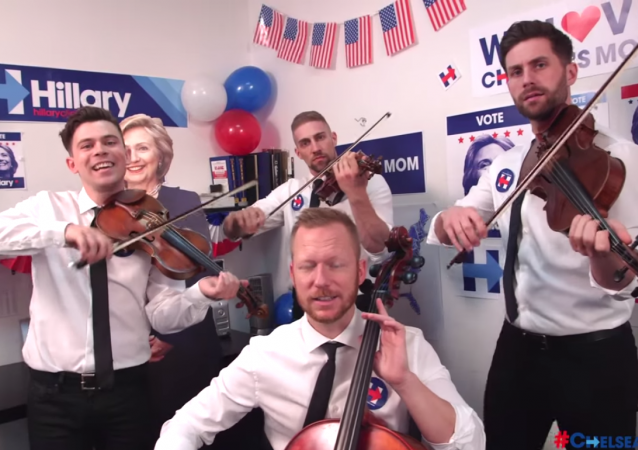 We might have a new contender for Worst Campaign Video of the Season… thus far.

Set to Stacy’s Mom by Fountains of Wayne, an unfortunately catchy ditty from 2003, Chelsea’s Mom appears to be pro-Hillary campaign tune.

This string rendition begins with four dudes sitting in a campaign office singing “Chelsea’s Mom has got it going on” into their phones. It’s all downhill from there.

“Chelsea do you remember back in ninety-three-e-e-e-e? Your Mom was quite the First Lady, I think you’d agree-e-e-e. She and Bill lead the nation what a wonderful pai-ai-ai-air.”

I wish I was joking.

“But not she’s much more than the FLOTUS that she used to be. The nation needs a champion, it’s time for Hillary!”

And the money shot, “from see to shining see, she’ll fight for liberty! She’s sexy and she’s strong. I’m gonna vote for Chelsea’s Mom.” Go ahead, take a minute to clean up the coffee you just spit all over the computer screen.

What lame, Democratic campaign song would be complete without a gut punch to Sen. Cruz? “Why should we put up with zealots like Ted Cruz? Anyone but Clinton would give us the blue-ue-ue-ues.”

This is the dumbest thing I’ve ever seen. Actually, I take that back. I’m not sure if it’s dumber than or as dumb as the Elizabeth Warren song, regardless, “Chelsea’s Mom” is terrible. TERRIBLE.

“Campaign” and “song” are two words that should never find themselves in the same sentence. Ever. Especially not songs that stretch so far as to imagine Hillary Clinton as sexy. ::shudders::

For the love of America, stop making campaign songs.

My word people! For the love of all that is holy and sacred, please, please, please put up a stern warning about possible mental anguish and harm from watching this video! I just woke up and played it and now my computer is covered with my morning coffee. I fear I will never overcome this trauma without years of intense counseling. I can feel the impending mental collapse coming. Oh the horror…..

Sorry, Cleetus, but I have to question your sanity, if you watched the video thinking it would be anything but mind numbing, nauseating, liberal claptrap.

But what do young people and the far left think of it? Just because it’s badly written, inane and ear-hurting doesn’t mean they won’t sing it.

We’ve made the mistake before of thinking that “even the left couldn’t fall for this!” And were then surprised to get 2 terms of Obama.

“from see to shining see…”

The music, as music, is not bad at all. It’s those inane lyrics that have to go! ” … used to be …” as a rhyme for “Hillary” (three distinct syllables)? Who’s got the barf bags?

A high-minded lady named Hillary
In assets took more than her fill-ery.
If her name were Nixon
The _Post_ would be fixin’
To stick her fair neck in the pillory!