“A gunshot isn’t a disease” 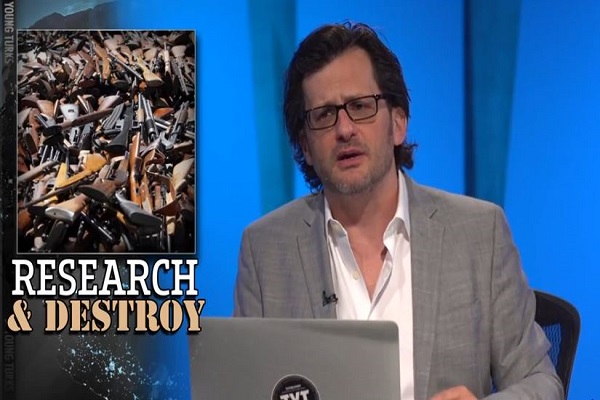 I don’t know about you, but I need some good news this week.  And there is a happy crumb to report: the House Appropriations Committee has rejected an amendment that would allow the CDC to “study the underlying causes of gun violence” (not that guns are violent in and of themselves, but you know the drill).

In doing so, House Republicans stopped Democrats from funding Obama-directed CDC research designed as subterfuge for laying the foundation of an attack on our Second Amendment rights.  Instead of turning gun control into a national health issue, Obama and his bureaucrat cronies are back to having to fight the Second Amendment on emotional pleas and using victims as political pawns.

The House Appropriations Committee on Tuesday rejected, 19-32, an amendment from top Democratic appropriator Nita Lowey (D-N.Y.) that would allow the Centers for Disease Control and Prevention to study the underlying causes of gun violence.

The CDC hasn’t done any such research since 1996, when the National Rifle Association accused it of trying to use science to promote gun control. Congress threatened to totally defund the agency if the work continued, and appropriators ever since have included a prohibition on funding that kind of research with spending bills.

A House GOP staffer said the existing provision technically doesn’t bar gun-violence research. Rather, it blocks any gun-control advocacy by the CDC. However, Republicans would consider any CDC findings that recommend limitations on guns to be gun-control advocacy.

Democrats were eager to emphasize that the proposed amendment centered on research,  not on our right to keep and bear arms.  Again from Politico:

“In Charleston, in Newtown, several times in Colorado and elsewhere … we find out the warning signs after shots were fired,” Lowey said. “This is not about a gun registry. There is no gun confiscation. There is absolutely no harm to the Second Amendment. This is about research. My amendment is about research, nothing more.”

. . . Democrats lined up to speak on the amendment at the hearing. Rep. Mike Quigley (D-Ill.) shared details of a survey that found Chicago-based elementary kids were more afraid of getting shot than getting braces.

Rep. Rosa DeLauro (D-Conn.) tried to emphasize that this was research, nothing else: “The notion that somehow research is our enemy is just wrong-headed. And for people to chip away at our ability to investigate efforts that are about public health and prevention, is wrong-headed. There is no reason not to fund this research.”

Despite their protest to the contrary, Democrats want the research to use as a means of imposing gun control.

Following is a video from the Young Turks (progressives), note the “research and destroy” image they use.  I’ve included it as the featured image because this encapsulates the exact reason Democrats propose these amendments every few years.

The problem is when an executive agency, one that has nothing to do with guns, becomes embroiled in the administration’s anti-gun, anti-Second Amendment agenda.

At a quick glance we might wonder what in the world the Center for Disease Control would be doing getting involved with gun related injuries in the first place. A gunshot isn’t a disease unless you survive a botched medical procedure and come down with lead poisoning at a later date. But liberals have long been keen on treating guns themselves as a social illness and one in need of redress. In that light, it’s not all that shocking that Democrat administrations would try to enlist the CDC into the gun grabbing battle. It’s a powerful bit of symbolism if they can accomplish it, much the same way that the Left attempts (with frequent success) to redefine the language to best suit their own purposes. Before too very long I expect the CDC to begin examining whether or not favoring tax cuts qualifies as a mental disorder.

Rejection of this amendment effectively shuts down another proposed avenue of attack on the Second Amendment, one that Obama directed the CDC to explore in a 2013 executive order.

One of President Obama’s less-noticed actions on guns yesterday could actually prove to be one of the most significant in the long run. Among other things, the president signed an executive order directing the Centers on Disease Control to start studying “the causes of gun violence” once again.

. . . . In his executive order, Obama clarified that the Centers on Disease Control should go forward with research on “causes and prevention of gun violence.” In other words, stop being so timid. Conduct research on anything that’s not expressly forbidden by Congress.

While Congress has not expressly forbidden the research, it has denied funding for two years that would enable the CDC to fulfill Obama’s executive order.  And in striking down this amendment, Congress has made it very clear that anti-gun advocacy and research will not be conduced by the CDC.

So what? Those are just words, and can be redefined by the Dictator to mean anything they want.

Or simply ignored. There is more than enough loose slush sloshing around a large agency like CDC to fund any research they wish. Slush is fungible.

Quite so. If they had wanted to, they could have taken the $2.87m they spent on researching why lesbians are fat; and the $1.4m they spent promoting “safe spaces” for homosexual children in public schools; and a few other similar studies; and put it towards anti-gun “research”. They have a huge budget, there’s money there for just about anything they want to give priority to.

So the CDC is now the CDC plague/disease that itself needs to be controlled and erased from harming humans?

I think it was Dr Kellermann, in one of his papers financed by the CDC, who found that a research program kept in the home is fifteen times more likely to destroy a civil right than it is to enhance the public safety.

Look up “Kellerman debunked” and Markowitz.

Killerman started with 43x and gradually reduced the count to 3X (IIRC). And, yes, he did get a lot of funding from CDC.

The first article was printed in 1986 and has been repeatedly debunked, but people still use him as a reference.

And us Conservatives are supposed to be the illiterate ones?

I propose that the right of the people, to keep and bear arms shall not be infringed.

I Second that proposal. 😉

Anything and everything they can think they’re doing to try to destroy everything America is and stands for.

Liberalism is a mental disorder and one of the few infectious pathologies extant today. In manifests in narcissistic, immature adult children who have never had any exposure to the realities of life, liberty and the pursuit of happiness. This contagion proliferates most aggressively in the minds of legally-adult child-minds who willingly yet lazily seek out a means to bring upon themselves some degree of self-importance; despite shrill cries to the contrary these infected act in no one’s best interest but thee own. They will happily destroy anyone who impedes their ambition and will adopt any ideology which will support their self-serving goals regardless of the inherent dangers of these ideologies.

Although not always easy to identify it is vital to avoid extensive contact with these self-annointed “Progressives”, “Liberals” or other terms at the risk of individual sanity and national destruction.

By attacking the god based religions (except, oddly, Islam /s) a very large population of people with a strong “need to believe” are left without a structured belief system.

So they convert to Liberalism. A belief system without moderation.

Perhaps the CDC could provide a more important service to the American people by identifying the underlying causes of negligent doctors and hospital staffs and their habits, that kill far more people in the USA than firearms do!!!

The Soviets put advocates of wrong positions in mental institutions, since they must be crazy to advocate such wrong positions. And what a disgrace to be found legally nuts. That is precisely what Obama and Democrats are trying to do with the CDC. CDC will find gun owners nuts. Clever, eh?

Because I have family and friends in the medical community, I felt guilty of my earlier comment about medical negligence . A quick web search gave me these numbers.
Doctors in 2014 were responsible for 440,000 deaths.
Firearms deaths in 2013 were were less than 34,000.
Nuff said??

Just one small subset of those deaths, those from preventable hospital-acquired infections, still kills at least twice (and perhaps three times) as many Americans as firearms do.

Or to put it another way, the hand holding the weapon that kills you is more likely to belong to a medical professional than to a firearm owner.

Where are the stats on people dying from auto wrecks? Oh that is right, they don’t exist because they are facts. I don’t see the self appointed legislators in the Executive branch trying to ban the automobile, because they kill. Gun control is all about control of the masses.

Actually, there was just a lively discussion on that over at the KevinMD medblog. You can go over and read the post, which is trying to push the stand AMA anti-gun agenda, but then click through and read all the comments offering the author a bit of a reality-check.
http://www.kevinmd.com/blog/2015/06/which-kills-more-guns-or-cars-the-answer-will-surprise-you.html

You should never give the young turks the time of day

Notice how Demorats always claim that their gun control bills are not gun control bills? They always say that they want to respect the 2nd amendment and have no intention of gun restrictions or lists. Just remember “If you like your doctor you can keep your doctor”.