ISIS flag at factory after attempt to blow it up. 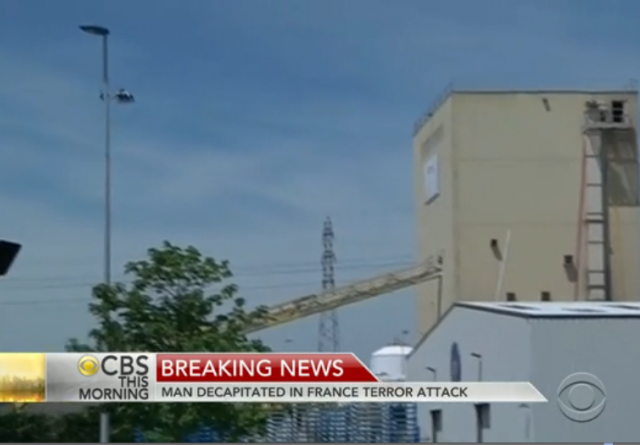 The details are just coming in, but there has been a terror attack at a gas factory near Lyon, France.

At least one, possibly two, attackers beheaded a man and posted his head on a fence, and tried (unsuccessfully) to blow up the factory.

We will update as more details are confirmed.

One person was found decapitated and two others injured Friday after an assailant — with a possible accomplice — drove a vehicle onto an industrial complex near the eastern city of Lyon and tried to blow up a gas factory.

“The intent was without doubt to cause an explosion. It was a terrorist attack,” President Francois Hollande said at a news conference in Belgium.

The attack targeted a chemical factory in the town of Saint-Quentin-Fallavier, about 20 miles southeast of Lyon. The plant is owned by the U.S. firm Air Products.

The slain victim’s head was found yards away from the body, stuck on a permiter fence, with Arabic writing on or near it. There were also flags or banners bearing Arabic writing found at the scene.

Official: Suspect in French terrorist attack had been under surveillance. http://t.co/iCfG65AMUg

French Interior Minister: #Grenoble suspect had been under surveillance but did not have criminal record http://t.co/Whu3R0jv2c

Beheading at Grenoble factory is the latest in a string of recent terror attacks in France http://t.co/tXaVhfY9qv pic.twitter.com/wG6AaAwDfI

French prosecutors say the suspect who they believe attacked a U.S. gas plant in France is a local truck driver who was known to workers at the Air Products plant.

Paris Prosecutor Francois Molins said Friday that the suspect, his wife, sister and another person who he would not describe further were in custody. He said the man found decapitated at the factory on Friday was the boss of the transportation company that the driver worked for in southeastern France.

Prosecutors’ spokeswoman Agnes Thibault-Lecuivre told The Associated Press they haven’t started asking questions about what might have motivated the attack and says it’s too early to say whether there could be a connection to international terror groups.

According to the Times of Israel, the suspect in custody was involved in an anti-Semitic attack in 2011:

e French Islamist arrested on suspicion of having decapitated his boss at a gas factory in Saint-Quentin-Fallavier, southeast of Lyon, earlier today, was involved in an anti-Semitic attack in 2011, according to reports.

The man was identified as Yassine Salhi, 35, a father of three, born to an Algerian father and a Moroccan mother.

Four years ago, Salhi and another man were reported to have hit a Jewish teenager and to have hurled anti-Semitic abuse at him while travelling on a train from Toulouse to Lyon, according to a report on JTA.

A year later, the other man, who was not named was given a six-month suspended sentence.

“You Jews with your skullcaps, you think you run the world,” Salhi is reported to have said to the teenager, adding other profanities.

The second assailant then followed the teenager to the train bar, making derogatory remarks about him, his mother, father “and your whole race,” before hitting him in the chest.

• The beheading victim was a 50-year-old man, said French President Francois Hollande, as he announced security was being raised to the maximum level in the region where the attack took place.

• The U.S. chemical firm whose factory was attacked says all its employees are accounted for; the attack victim has not yet been publicly identified.

• The suspect is “somebody who was in touch with (Muslim fundamentalist) Salafists,” French Interior Minister Bernard Cazeneuve said. The man had been under surveillance but was not previously involved in terrorist activities, he said.

• French authorities are “investigating any other people that could be accomplices,” Cazeneuve said.

So, another Known Wolf attack. AirProducts produces industrial gases, oxygen among them, but acetylene and other flammables as well.

One of the problems you have in making a massive explosion is in getting enough oxygen to your fuel source at the needed rate. This could have gone VERY badly.

When this happens in America, and it invariably will and soon, Dear Leader will call it Workplace Violence.

CBS was still broadcasting (in live time) propaganda that this was not terrorism – after their competion and the French President were clearly calling it terrorism!

So when did the screen capture of CBS being the last of the broadcasters to catch up appear?

So have the French surrendered yet?

This is becoming dated: The US may surrender before the French.

It must have been that Religion of Peace again. You know, the Radical Amish. How long before they bring down the Eiffel Tower by crashing their buggies into it?

Didn’t I see this on Game of Thrones?

Sad to say, this should come as no surprise. Look how long France has been nursing the Islamic viper in its bosom ~

And our betters can’t understand why the hoi polloi get so fired up about those nice brown people coming here from the south to clean their houses and mow their lawns. The little people are such nasty racists. They should just work in their factories (well, in the few we’ve not shipped overseas) and shut up.

[Class] diversity policies sound nice in principle, but they have a notorious history in practice. I wonder who will triggered next.

Plus, a couple dozen mostly European tourists gunned down on a beach in Tunisia. But our president tells us ISIS is a localized movement.

And the social complex, including the so-called human rights corporations, that are attempting to shame Europeans to accept displacement through mass and illegal immigration. Presumably to compensate for the carnage they supported with premature evacuation from Iraq, brutal regime change in Libya, failed establishment of a far-left regime in Egypt, mass destruction and killing Syria, a staged civil war in Ukraine, etc. Then again, perhaps its just a progressive process since they failed to provoke Russia to accept the bait to engage in an armed conflict.