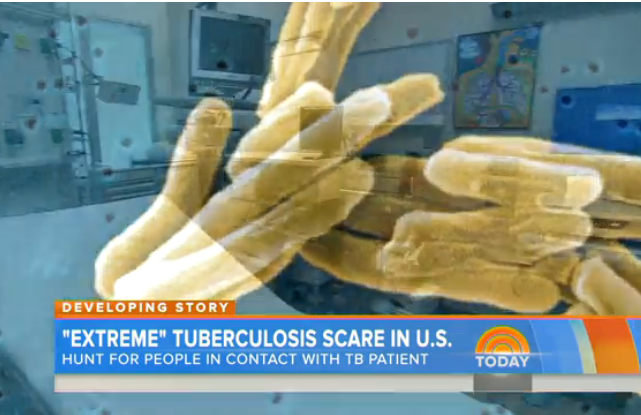 American officials are scrambling to contact people exposed to an Indian woman who has been diagnosed with an extremely difficult-to-treat strain of tuberculosis.

A female patient with an extremely hard-to-treat form of tuberculosis is being treated at the National Institutes of Health [NIH] outside Washington, D.C., and federal and state officials are now tracking down hundreds of people who may have been in contact with her.

The woman traveled to at least three states before she sought treatment from a U.S. doctor. While TB is not easily caught by casual contact, extensively drug resistant (XDR) TB is so dangerous that health officials will have to make a concerted effort to warn anyone who may be at risk.

… The patient, who isn’t being identified in any way, may face months or even years of treatment. Ordinary TB is hard to treat and requires, at a minimum, weeks of antibiotics. XDR-TB resists the effects of almost all the known TB drugs. Sometimes patients have to have pockets of infection surgically removed.

Only about a third to half of cases can even be cured.

This quest could prove extremely challenging. The NIH’s latest patient traveled through one of the country’s busiest airport hubs then onto three separate states.

Officials are searching for people who may have had contact with a woman who has a rare and deadly form of tuberculosis. The woman passed through O’Hare Airport on her way to visit relatives in McHenry County.

Two months ago, a 25-year-old woman arrived at O’Hare from India. She passed through before traveling to other states, including Tennessee and Missouri. In late May, the woman came back to the Chicago area to visit relatives in McHenry County, where she became ill.

More details are in this Today.com video:

Additionally, there is another troubling tuberculosis-related development affecting an Indiana school.

Nearly 50 Southern Indiana students exposed to a classmate with a confirmed case of tuberculosis have tested positive for the disease in preliminary tests, health officials said.

Clark County Health Department administrator Mike Meyer said Friday that the 48 positive skin tests for the bacterial disease don’t mean those students have diagnosed TB cases. He said the students at Rock Creek Community Academy in Sellersburg will undergo chest X-rays and possibly other tests to determine whether they indeed have the illness.

Another 300 students are slated to undergo testing, and those who had negative tests will need another round before school starts because tuberculosis has a long incubation period.

Another health official went on to provide additional information on American tuberculosis outbreaks:

Tom Harris, health officer at the Floyd County Health Department, said the U.S. has only about 10,000 new confirmed cases of tuberculosis each year. He said two-thirds of those crossed the country’s borders and didn’t originate here.

For those wondering if there is a vaccine for tuberulosis one could offer school kids, the answer “yes” — but it is effective only in the very young, and is most often given to infants and small children in countries where TB is common. A medical expert says these situations underscore the need for a new one.

CBS News medical contributor Dr. David Agus spoke to “CBS This Morning” on Tuesday about the woman who is being treated at a National Institutes of Health Hospital in Maryland with a deadly form of tuberculosis. Agus states that a new vaccine is needed to combat the disease.

“There is a vaccination, it only works in terms of severity in young kids, so we don’t us it in the U.S.,” he said. “We desperately need a new vaccine for tuberculosis, both here and around the world.”

Agus says the woman is battling extremely drug-resistance tuberculosis. This type doesn’t respond at all to the four standard treatments.

“There are treatments that we use that are experimental, they take up to two years of these drugs,” Agus explained to “CBS This Morning.” “The treatments themselves are very toxic and require obviously significant costs and right now require her to be contained in a facility – Building 10 – which is the clinical center at NIH.”

Agus says the kind of tuberculosis this woman is suffering from is the “same contagious” as regular tuberculosis. When someone with tuberculosis coughs, those droplets can stay in the air for two to three hours and spread to other people.

Back in 2010, we recorded the fewest cases of tuberculosis in the United States since records began to be taken, in 1953. There has been a slight decline from that low level over the past few years as well. I will be interested in what the number is in January, 2017.

Let’s continue to admit more citizens from the 3rd world. We’ll treat them for FREE … courtesy of the American taxpayer. FREE medical treatment, FREE pakoras, FREE everything. If our kids die in the meantime, that’s a small price to pay for diversity. Ain’t liberalism grand?

TB had been treatable in most cases for decades. Even some drug-resistant forms can be treated. The “extreme” form this woman has may indeed be untreatable, or very difficult to treat. We can thank the HIV cases and drug addicts who don’t complete their treatment regimens for some of the worst forms.

When I read the headline (Flight Risk: Woman with Extreme Form of TB Flies), at first I thought it meant that, as a symptom of TB, a woman could now fly.

May she flee to the White House.