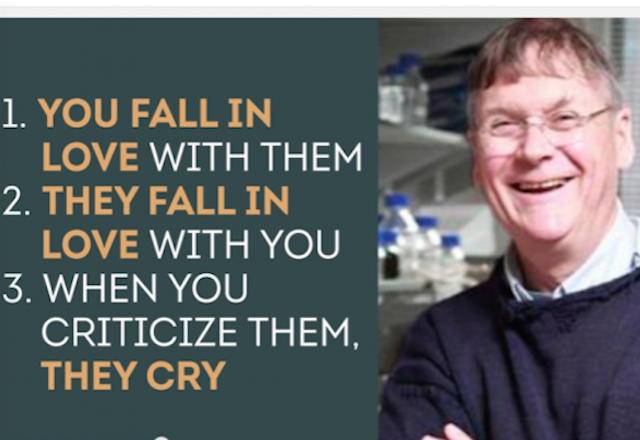 It seems like only yesterday we were reporting on Dr. Matt Taylor, the brilliant British scientist who was instrumental in landing a probe on a comet hundreds of millions of miles away, who became the target of social media wrath.

His crime: Wearing a shirt that was deemed “anti-woman” by hyper-feminists.

More recently, Dr. Tim Hunt, a Nobel-prizing winning physiologist, a British knight, and a leading advocate for science education that is usually promoted by women’s rights activists, made a lame joke about single-sex labs.

‘Let me tell you about my trouble with girls” is an opening sentence that, when declared in public, rarely ends well — fair or not.

And it certainly didn’t for Nobel Prize winning scientist Tim Hunt, who was talking about the challenges of women in labs recently at the World Conference of Science Journalists in Seoul, South Korea.

A week ago, Tim Hunt was a well-known Nobel Prize winner who was promoting science education throughout Europe and the world.

Today he’s widely perceived as a sexist who has been stripped of most of his positions because of inappropriate comments about women in science.

Gone is his position with the European Research Council science committee, his role at the Royal Society, and his honorary post at University College London. He said Sunday he was fired from the latter, while the university has said only that his resignation was accepted.

…The comments caused an instant Twitter storm that quickly led to Hunt, 72, leaving his posts even as he apologized. He has said he had been trying to make a joke, but nevertheless stood by his comment that love affairs in the lab are disruptive to science.

He was vilified by many, including The Guardian’s Anne Perkins, who wrote that his comments were “the educated man’s version” of blaming rape victims because they were wearing short skirts before they were attacked.

I would argue that instead of playing the “rape” card, the better response was to counter a stupid attempt at humor with something far wittier…along the lines of this video:

How bad was the Twitter targeting? So bad that a noted feminist and novelist Van Badham was repelled at his treatment.

I’m not trying to excuse or exonerate Hunt, but rather to criticise his selection as an individual scapegoat, in this case for the broader and ongoing cultural problem of sexism and gender misrepresentation that remains unchallenged. Shoving him off his social platform with a forced resignation is tokenism.

“Is it appropriate to hound someone out of their position at a university or indeed, is it appropriate for the university to react in the way that UCL [University College London] in this case did and ask someone to resign or else threaten to sack them?” Prof Cox said.

“We do have a problem about these mobs – you call them Twitter mobs, descending on people who use language ill-advisedly and cause great professional ruin. I don’t think that is the case although he felt that.

“To have a Nobel prize winner and by all accounts a great scientist and a good person being hounded out of a position at UCL, after all those years of good work in science, I think that’s wrong and disproportionate.”

According to his wife, Professor Mary Collins (one of Britain’s most senior immunologists), Hunt does the shopping and cooking, so the man is hardly the poster child for male chauvinist pigs. During an interview with her husband, Collins shares what happened in the wake of the “joke.”

“I was told by a senior that Tim had to resign immediately or be sacked – though I was told it would be treated as a low-key affair. Tim duly emailed his resignation when he got home. The university promptly announced his resignation on its website and started tweeting that they had got rid of him. Essentially, they had hung both of us out to dry. They certainly did not treat it as a low-key affair. I got no warning about the announcement and no offer of help, even though I have worked there for nearly 20 years. It has done me lasting damage. What they did was unacceptable.”

In the past, I may have noted that perhaps jokes should be left to professional comedians. However, even they are afraid to do comedy on campus in today’s politically correct environment.

Based on my calculation, data indicate that the climate for men on campus will continue to be quite hostile for some time to come. This hurts both men and women.

“I may have noted that perhaps jokes should be left to professional comedians.”

To which I politely say, HORSESHIT!

This is a man…and his wife…who really COULD help find the “cure to cancer”.

He can make any joke he’d care to. People are free to think it in bad taste, and avoid his company at the next cheese and wine do.

But ENOUGH of this bullshit.

Perhaps people need to laugh at jokes, and consider what they MIGHT even be teaching.

They aborted their sense of humor a long time ago.

Legally and socially flog him to within an inch of his dignity and life. Then with planning and empathy abort him at a private stake.

I do believe people were burned at stakes, not aborted.

Yeah, but these are feminist Inquisitors.

I’m sure Taylor’s female colleagues would have won buckets of Nobel’s by now if they hadn’t been crushed under the weight of his partriarchal oppression.

Maybe that’s why they’re so pissed.

These feminists have no room to criticize any scientist, period. The few women in science aren’t the whiners and complainers, it is Wymyn’s Studies majors who can’t remember the recipe to boil water or the chemical formula for CO2. They are stupid, ignorant people lambasting their betters, and they should STFU.

I deeply resent my taxes being wasted on these dumb broads and their self-indulgent crap. Cut off the subsidies and see how well that stuff sells in a free market.

You’d be wrong about that…there are plenty of grievance bearers in Science, particularly the women but also the minorities.

Apparently it’s everywhere now. What would our forebears have thought of all these delicate flowers who require the rest of the world become part of their insanity?

Here’s an idea: Either grow up, or go to your padded safe rooms and stay there. Forever.

I have a better idea for these special snowflakes – go change your gender if you don’t like how you’re being treated.

Don’t make the mistake of believing that these are fragile people of delicate sensibilities. These are vicious climbers who lack the skill or talent to succeed on their merits, and are constrained by neither character nor integrity in their choice of alternative methods to compete. There is nothing passive or defensive about any of this. Just ruthless cutthroats using the ill-informed emotions of the lazy masses around them as a weapon to destroy their opponents.

In another story, I read that he was unexpectedly asked to make some comment of women in the lab. He had to come up with something extemporaneously in front of a crowd, so he reached into his humor bucket which probably didn’t seem funny to the Koreans because the cultures are so different. The lack of tolerance reminds one of racial bigotry or perhaps anti semitism.

Leftists are humorless bastards. Left wing Feminists are even worse.

They think mocking traditional America is “funny”, but I think their laughter is haughty and hollow. It’s more a laugh of scorn and contempt, not humor over the fallibility of human nature, as we pursue great things. Their pursuit is the destruction of their non-PC opponent, and they laugh AT in scorn, to build their own ego. They are shallow.

Women are probably more in touch with their feelings, and cry more, but it doesn’t (necessarily) influence their science. But advancing a career based on coercive use of race or sex does harm the sciences, as we see with the AGW influences on grants, or the incredible scientist that wears a cool shirt, that doesn’t pass muster with the PC police.

Scientist are strange people. Women are pretty average. Except for the feminist left who are trending psycho.

I figured anyone with a Nobel would be pretty much bullet proof as far as repercussions for comments goes, but I was wrong. There are “higher’ considerations, it seems.

The effing irony: the Flaming Feminists want Everyone to think of them as strong, equal players in this great big world…and that is the reason for their hissy fit over Hunt.

Anyone else see the irony of the feminist outrage at the joke about them crying when criticized and then head to social media and cry about it?

I never joined the movement; I was busy proving that my work was as valuable as that of a man. I had been under the impression back then that feminism was about empowering women. I’ve come to the conclusion that feminism is now about dis-empowering everyone, and victimizing men has become the primary focus.

Good women will have nothing to do with this garbage, and those who become part of the movement will forever be girls or “females” (a term my late husband used in the most derogatory manner that I’ve since fully embraced) rather than real women.

There is NO CRYING in science.

Actually, the biochemistry of tears is a fascinating field of study.

And the math involved in blowing snot-bubbles…don’t even get me started…!!!

The funny (as in smell) part of all this is the assumption that “you fall in love with them” and “they fall in love with you” is the same as “Wow! Women are so sexually distracting”. Now, this may be true in some specific instances but is it not the *entirety* of the feminist ideal that they are found lovely for their aspects *other* than the physical?

Put another way, where are you more likely to be found desirable primarily for your intellect than in a lab? Maybe if it were only your brain that was in the lab… “Paging Dr. Hfuhruhurr”

So the first two comments are not sexist and really come down to a banal observation that love among co-workers creates problems. Big deal, there’s a reason why big companies have policies about these things.

You could argue that the last one is sexist, I suppose, but then the satirical responses would have been about that. I seem to recall a job board company (each region has their own domain that is some variation on YourCityJobShop) with a radio ad featuring a receptionist who broke into tears at the slightest question. I could see some really funny responses coming along _those_ lines.

My take on this is a little different. I saw a picture of a failure of modern manliness. Dr. Hunt was in a position of strength, at the peak of his career. He should have refused to back pedal or apologize. He should have mocked his accusers, politely but mercilessly.

Instead he rolled over, surrendered and sniveled.