Do you trust President Obama with Iran negotiations?

Do you trust President Obama with Iran negotiations? 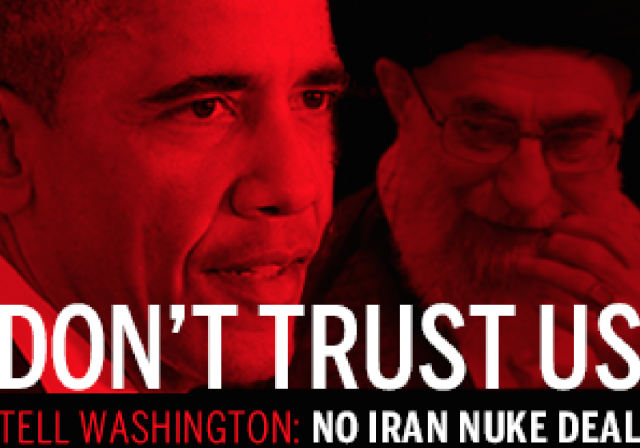 IranTruth.org hopes to expose the dangers of the Obama administration’s dealings with Iran.

More than once, Iran’s Supreme Leader has completely contradicted our own State Department. While our government assures us our nuclear agreements with Iran are iron-clad, Iranian officials publicly announce they will not abide by these very same agreements.

Iran has also demonstrated an unwavering commitment to building nuclear weapons, enriching uranium in violation of international treaties and proliferating ballistic missiles with which to deliver weapons of mass destruction.

In short, President Obama’s nuclear diplomacy with Iran will concede the bomb to Tehran.

David Reaboi, foreign policy expert and Director of IranTruth.org, said, “There is no more important issue facing our country. The American people need to be told the truth about Obama’s reckless deal that—even he admits—guarantees arming the world’s largest state sponsor of jihadist terrorism with the world’s most dangerous weapons.”

Mr. Reaboi shared with us why IranTruth is such an important project. “We started IranTruth because, in order to cut through the fanatically partisan media, we realized the voices of truth needed to be louder.”

“Since coming to power in 1979, the Iranian regime has seen America and Israel as its greatest enemies. In the last half-decade, Iranian expansionism, mischief and destruction has barreled across the Middle East. They now control 5 of the regions capitols; the casualties are mounting, and they are promising more to come.”

“Obsessed with opening relations with our mortal enemies, the administration and the media are trying to make Americans not notice that, rather than become more moderate, the mullahs have become more aggressive as they draw closer to obtaining nuclear weapons.”

The American people need to know the character of the Iranian jihadist regime and its dedication to worldwide Islamic Revolution.”

IranTruth will be a one-stop-shop. According to Reaboi, “IranTruth.org will feature news, analysis, original videos, and backgrounders, covering issues like Iranian sponsorship of Hezbollah and Shia terrorist militias in Iraq and Yemen. IranTruth.org will speak loudly but authoritatively, telling the truth about Iran’s threat to our national security, to Americans and Jews around the world, to the people inside Iran, as well as the broader Middle East.”

Nobody with a working brain trusts Barracula with ANYTHING.

But why are we worrying about Iran getting atomic weapons when we have to address the flying of an antique flag over a monument?

The only think believable about Obama is he is a committed Marxist.

BigZero is not negotiating with Iran; he’s simply going through the motions to make the gullible believe he is negotiating. He’s not even doing a good job of pretending. He is the prizefighter who is throwing the match, but in such an obvious manner than no knowledgeable person is fooled.

I wouldn’t trust Turd Boy to be the Dog Catcher. He’s a committed Marxist that belongs OUT of our country not running it.

wouldn’t trust either of them to watch my pet goat….

Thanks for the big laugh Kemberlee!

To negotiate a trade deal… To get in front of global competitors, perhaps China or Russia.

When Iran’s Supreme Leader said a couple of months ago that the “agreement” had no provisions for on-site inspections, I believed him. It’s a very sorry time in which we live when the likes of an Iranian cleric is more credible than our own president.

LI readers are asked if they trust Obama. Hmmmm… gee. Hard to say.

“As long as I’m President of the United States, Iran will not get a nuclear weapon.”

Because Iran probably can’t build a bomb before he leaves office, the statement will likely remain true, for whatever a single truth may be worth in a sea of lies.

While Boehner, McConnell and Prebus fiddle, Obama will burn ‘Rome.’

Do I trust Obama in ANY negotiations? Not no, but HELL No!

Obama has a very hard time admitting that something is not working out right * , not just here, but everywhere. And he’s bad at negotiating.

* But eventually he does, after it’s been undeniable for a week or two.

“But eventually he does…”

Could you name some of them?

“Do you trust President Obama with Iran negotiations?”

About as much as I trust Boehner and McConnell to be conservative Republicans interested in our nation’s laws and security…so, no, none at all.