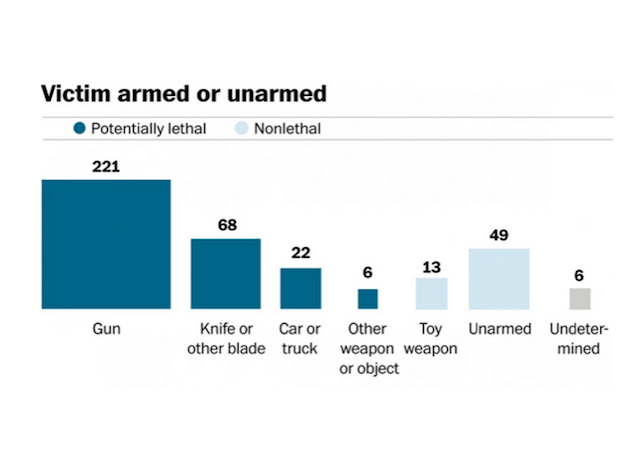 One of the dominant theories of our time is that police officers are waging a Terminator-like war against unarmed young black men, killing them with a ruthlessness and determination evocative of a genocide, all the while escaping legal sanction.

The Washington Post, certainly not a paper to shy away from fanning the flames of discord, seems to have stumbled upon some actual data on the subject.  Their reporting of this data is, as one might have expected, far richer in anecdote than analysis, but nevertheless the snippets of data that slip through are perhaps noteworthy.

We start with a data point showing 385 police killings of suspects so far this year. 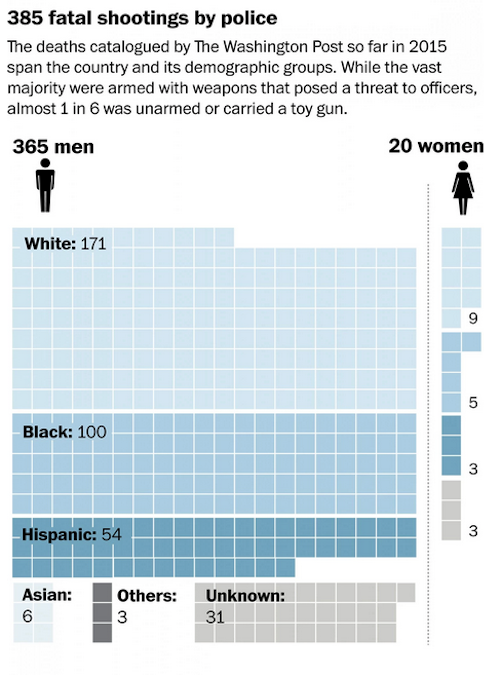 Crime statistics gathered by the Federal Bureau of Investigation are informative on this last point. The data on arrests indicates that black people account for 56% of those arrested for murder and voluntary manslaughter, forcible rape, robbery, aggravated assault/battery, and burglary.

Of course, not all those who are arrested for a crime are necessarily convicted of that crime, or even of any crime at all, but there’s no reason that this caution would not apply similarly to every demographic group captured by the FBI data.  Thus the tremendous disparity in arrest rates for the most violent crimes remains remarkable, and this remains so even if the claimed cause for the disparity is racism.

The result then is that the FBI data suggests that roughly 56% of the most violent crimes are committed by black people, but the Washington Post data indicates only about 25% of those killed by police are black people.  This would seem to be a disproportion favorable to black people.

So much for the assertion that the police are waging war on black people.

None of this suggests, of course, that police officers never use their weapons unlawfully, sometimes against black suspects. Naturally, where such cases occur they should be prosecuted vigorously.  One case authorities believe to fall into this category is the shooting this past April in South Carolina of Walter Scott by Officer Michael Slager, which Legal Insurrection reported on here:  Cop Shoots Fleeing Unarmed Black Man, Charged With Murder, and here Dash Cam Footage of Walter Scott Shooting Released, and here On shooting fleeing suspects.  Slager was promptly charged with murder and arrested.

Also interesting, of the 385 police killings nearly 90% involved the shooting of a suspect who displayed a deadly weapon, or apparent deadly weapon (e.g., a realistic looking toy gun). 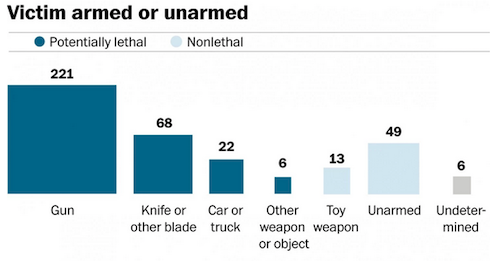 There goes the “unarmed victim” claim.

I haven’t the stomach or time to dive into the many anecdotal events stuffed into the analysis in an apparent effort to dull the sharp edge of the reality this data represents, but naturally you should feel free to read the whole thing.

The UK paper the Guardian has done a similar study on American deaths by police with similar results, but one thing that can be seen there is that persons of color, and especially Blacks, are more than twice as likely to be killed while unarmed than are Whites, as a percentage of each racial group. (And they include things other than firearms as weapons, such as vehicles, BB guns and airsoft rifles, machetes, swords and blunt instruments.) Only 38 of 238 Whites (16%) killed by police were unarmed, while 43 of 136 Blacks (32%) killed by police were unarmed. So it would appear that while the absolute change of being killed by police, at least based on the total numbers is smaller if you are Black (something that I don’t think comes as a surprise), there is a clear indicator that the level of reaction or aggression may be higher with Blacks, which is exactly what the #blacklivesmatter movement contends. Like the Post study, the devil will be in the details, however.

The link to the Guardian database is:

Assuming that there is indeed a heightened reaction of police to black suspects, I wonder to what extent that heightened reaction is a rational response to the fact that black people commit violent acts of criminality in gross proportion to their population?

To put it another way, if we know for a fact that a certain demographic is committing violent crimes at rates 300%+ their representation in the population, is that a fact that should be ignored by a police officer when encountering a member of that demographic who is a valid suspect of criminal activity?

Personally, I drive more carefully when it’s icy out. 🙂

That is certainly a possibility. As I said, the devil will be in the details.

On which side? Because you have NOTHING to support what it appears you are saying.

Could it not be a function of young black criminals being physically aggressive PLUS coming from a culture of hopelessness?

I wonder if there are other factors that contribute to these numbers, such as whether black or white suspects are more or less likely to be operating in groups rather than alone, or be significantly larger/stronger/more aggressive than the officers (disparity of numbers and of size/strength, from a self-defense law standpoint).

Also, the University of Washington ran a “deadly force” lab experiment last year, finding that responding officers take longer to pull the trigger against black suspects than against white or Hispanic suspects. It’s almost like the officers are double-checking themselves in the moment to make sure a black suspect is actually a threat before shooting, which lends credence to my question above about other contributing factors.

The devil’s always in the details, but that doesn’t preclude him from being in the main thesis, too.

I posted below a PoliceOne link to that study

That’s the most recent of a series of studies on that point and is, indeed, very interesting in that it contradicts the findings of some of the prior studies. A good list of most of the prior studies can be found here: http://www.fairimpartialpolicing.com/bias/

That doesn’t indicate a different attitude by police toward black people. It could indicate that black people are more likely to force the police into using deadly force than are others. This would be consistent with the overall crime data.

Your supposition that “unarmed” = “non-lethal” is a logical fallacy. Wherein do these data show the hostile intent of an unarmed perpetrator? They don’t, and we can only surmise. But I wonder if there are more Mike Browns out there, unarmed but still willing to tangle with an armed officer?

And before you tell me that “unarmed” cannot = “lethal”, take a minute to research how easy it is to inflict damage, including death, using only the body.

As I said, the devil will be in the details. They could well show that some of the unarmed deceased were acting lethally in some way and there can be no doubt that the legal system has said that the vast majority of the killings were legally justified. But part of the #blacklivesmatter campaign (indeed, the most serious part of it in my opinion) does not contend that the officers were not legally justified in doing what they did, but instead that the officers could have taken steps prior to the confrontation to reduce the chance of that confrontation happening in the first place.

“43 of 136 Blacks (32%) killed by police were unarmed a clear indicator that the level of reaction or aggression may be higher with Blacks,”

Could it be some blacks are more likely to be less cooperative and more aggressive towards police which results in the heighten stats?

Perhaps we should be distinguishing “committing a violent attack” from “just standing there”.

Trayvon Martin was unarmed. So was Michael Brown. Neither shooting was wrong.

In contrast, that guy who was carrying a gun with a license in a store and had someone call the police — he was shot just standing there threatening no one.

Armed and unarmed is absolutely the wrong thing to look at.

Erik Scott was the name I was looking for.

Yes, but “unarmed” better fits the narrative that is being sought.

I can’t fault the study for using unarmed based on how they probably acquired the data.

On the other hand, you can ABSOLUTELY fault the media (who are smarter than they pretend to be) when they don’t take considerations like yours into account when crafting their BS narratives.

The Washington Post is saying that of the 365 men shot dead by police so far this year, 171 of them were white.

Those statistics are wrong and clearly raaaaacist.

Why, Chris Rock told us all just last week on Twitter that the police in the U.S. never shoot and kill white boys, just black ones.

Hands Up, Don’t Shoot! Black Lives Matter! Protect the Narrative At All Costs!

Chris Rock is desperately trying to keep from getting Cosbied after his “Nl6&r3z vs. Black People” bit and his “How Not To Get Your Azz Beat By the Cops” video.

Those two clips have “gone viral” for months now. The Activist Class are not happy about it.

Yea and according to Geraldo citizens with guns “never help stop crime”…..well other than about the 2 million times the FBI reports that he is ignoring.

If #BlackLivesMatter, why do blacks seem to take so little care in staying alive? They walk around with bb guns with the orange tips taken off and don’t seem to be aware when cops are not messing around.

Ok, that would explain it.

More blacks are killed from abortions than being shot by the cops. Yet, no one seems to think that does not matter. Where are the black activists on this issue? Oh that is right, they support abortion in any stage of pregnancy.

How many of those black deaths are suicide by cop? Or do they even want refine that statistic?

I could run the same statistics any given weekend in Chicago and the numbers would be orders of magnitude worse.

I lived 40 years of my life rural America WVa . I can tell you . There are areas of 99% white areas that are ghettos where the majority of whites live and that is where most of the crime is and people get hurt or shot in confrontations with police.The media does not understand statistics. They just understand agenda