…in that she didn’t actually apologize. 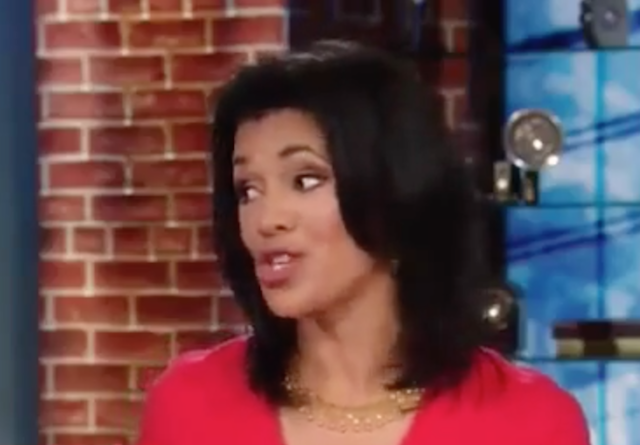 On Saturday, CNN anchor Fredricka Whitfield slipped in a puddle of gaffe when she described the man who shot up the Dallas police department headquarters as “very courageous and brave, if not crazy as well.”

The reaction was swift and vicious. (My own comments, linked above, weren’t exactly gentle.) Even the Houston and Fort Worth police officers’ associations jumped on the pile, demanding an apology from CNN and Whitfield:

"Courageous and brave" to shoot at police officers with an assault rifle. Get a clue and WAKE UP!
https://t.co/I1hYFlfpv4

Responding to pressure, Whitfield, addressed her choice of words today, saying, “I misspoke, and in no way believe the gunman was courageous, nor brave.” Watch:

Notice that I didn’t say “she apologized for her comments,” because she didn’t. Stick a pin in that.

Joe Concha at Mediaite has, at least I think, a fair point about the ensuing outrage, and how far the internet lynch mob is willing to go when something like this happens:

Whitfield should have absolutely known better having sat in an anchor chair during situations like this for nearly two decades, having worked for the NBC Nightly News before CNN since 1995. And of course, everyone in the business knows what happened to then-ABC’s Bill Maher when he seemed to praise the 9/11 hijackers for bravery (or whatever “not cowardly” equates to) while calling the U.S. cowardly. Here’s what he said on his show shortly after 9/11:

“We have been the cowards. Lobbing cruise missiles from two thousand miles away. That’s cowardly. Staying in the airplane when it hits the building. Say what you want about it. Not cowardly.”

Maher was fired soon thereafter. So should Whitfield be fired as well? Not even close. Suspended? Don’t think so…only because there was no intent here (unlike, say…ex-MSNBCer Martin Bashir, who wrote his recommendation that someone should defecate in Sarah Palin’s mouth beforehand and had it loaded in prompter).

In my original post on this, I called Whitfield’s words “ignorant” with regards to the severity, fear, and danger of the situation the Dallas PD found itself in. I stand by that statement, but I also think that Concha has a point with regards to intent.

Whitfield should have apologized, not because I expect every journo who makes an ignorant comment to fall at my feet and plead for the life of her career, but because what she said was just that shockingly stupid. It offended people; it shocked a community; it led some of her viewers to believe that we were about to hear an irrational discussion about the motivations of a madman.

That earns an “I’m sorry” that neither her viewers, nor the Dallas PD, are likely to ever get.

WOW! Someone who is actually too stupid to be an anchor at CNN.

Or, not too stupid to be an anchor at CNN, which is much worse.

Now we know why she went from NBC to CNN. Next stop, Daily Kos.

Whomever all got upset about her statement probably comprise the sum total of CNN viewers now.

But yeah, fire her. She deserves it. She’s even stupider and MORE racist than the other racist idiots on CNN, and that’s saying something.

Maybe one way to stem the cycle of outrage and witch burnings over stupid comments would be to stop being outraged about what is said by those who are on tv or in the news and countering what they said, period.

No demands for apologies, no outraged cries of injustice or bigotry or lacks of compassion.

Demands for apologies seem to balloon into calls for reprisals and other assorted outragy outrage.

Let’s just stop huh? Point out what they said as being stupid or wrong or inappropriate.

Let’s stop with the demands that what they’ve done is so heinous, so vicious and so dangerous that they must be suppressed and apologize.

I see that Tim Hunt (Nobel prize winner) is being roasted alive for some comment he made.

Here’s the deal. I am old, retired and well off enough that I don’t really GAS what anyone thinks of me. If you need to express your sensitivity through outrage, aim it at me because, as I said above, I don’t GAS.

I don’t demand any firings. (I may sometimes say that it’s hypocritical that the left never demands firings of their own when they so consistently demand the firings of talking heads on the right, but I don’t actually say that I can’t go on another day if that person isn’t given the boot.)

I actually LIKE to have them out there spouting their absurd blather to ever-dwindling audiences!

Just explain how what they said was monumentally stupid

‘Way back when, Jefferson, Madison, et al actually believed that the new United States wouldn’t need an army or navy, or indeed any foreign policies at all. The country could sit in its new-found Splendid Isolation and ignore the follies of Europe. Should any conflicts arise, all that would be needed to resolve them would be a clear and calm exposition about how the United States was right about the dispute, and all would be well.

Of course it didn’t take long for that approach to problem-solving to be shown to be remarkably foolish. All that happened was that Europe realized that no matter what happened, the Americans would talk up a storm but they wouldn’t fight. And America immediately became everybody’s punching bag. From the Quasi-War to Tripoli to the bombardment of McHenry, the US learned that you do what you have to do, and immaculate logic and reasoned exposition about right vs. wrong ain’t it.

At first the extralegal means were perversions, albeit legal ones, of the First Amendment—protests, bullhorns, and music festivals, all staged right on top of any opponent trying to give a speech. Then they graduated to constant complaining. Administrators, CEOs, bureaucrats—they all hate complaints, and will do almost anything to make them go away. This is how professors are hounded out of schools; the whiners are powerless to get people fired, so they make life unpleasant for the clerks who actually run things, and the clerks then do the only thing they can to make the noise go away.

Now, with the gradual introduction of the concept of “hate crimes”, the professional whiners are on the verge of having entirely legal means to shut down anything they don’t want to hear, simply by insisting that it’s “hate” and illegal.

You are not going to fight this by simply pointing out that it’s wrong, stupid, destructive, counterproductive, nasty, anti-American, etc etc. To be successful you will have to fight it any way you can.

But realize that nothing you think is “reasonable” will make a dent in the problem. We’re far beyond that point, and it’s the Left which dragged us there.

It is the double standard that makes me angry. I can pull up to work with my car blasting the most vile, profane rap music and no one will say a thing.

If I walk down the hall and whistle Dixie I will be fired immediately.

Apologies in these circumstances are absolute b.s., just as they are from most criminals at the time of their sentencing.

She should be fired.

Do you think it would have been OK if this CNN Numbskull had described a Racist as “Energetic and Purposeful”?
Jeesh.
LOL

not because I expect every journo who makes an ignorant comment to fall at my feet and plead for the life of her career, but because what she said was just that shockingly stupid.

The old question—is this just Guinness World Record-level stupidity, or rank evil—isn’t really relevant, because whichever it is, the solution is the same. Improve the quality of CNN on-air “talent” immediately by getting this hammerhead off the air. Voilà, no more problem, until of course the next one appears.

The media seems to have a hard time distinguishing between courage and insanity or blind zealotry.

I wonder why that is?

The left does not apply a logical analysis to the facts and then draw a conclusion. They do not move from concrete facts to abstract concepts. The left applies their concepts to the facts as a filter moving from the abstract to the concrete. That is how they can believe “Hands up, don’t shoot.”
The police are the enemy and anybody who attempts to harm them is good. It makes complete sense to her and her fellow travelers at CNN. To those in the thinking part of the world, the left makes no sense because it doesn’t. They lie to themselves because what they believe is a lie. Regular LI readers are candidates for the re-education camps where we WILL learn concepts and how to use them as filters. Then we too can consider stupid as smart and be good CNN viewers.

Let us not forget that there was a principal fired for defending Officer Casebolt. The principal wasn’t praising Casebolt, he simply said that in the totality of circumstances Casebolt’s action was justified.
Bill Maher’s remarks were of the form “There are a lot of things you could call the 911 hijacks but cowardly isn’t one of them.”

Fredricka Whitfield: Hey, that’s what I was taught in college.

Attributing courage and bravery to an act of attempted homicidal revenge is ludicrous in its desire to evoke empathy toward the Dallas shooter’s psychopathology. But, then again, Fredricka Whitfield is CNN and CNN is where Ludicrous and his followers must operate to evoke.

That’s the kind of apology George Costanza got from Jason Hanke.