Can Brian Williams save MSNBC?

Can Brian Williams save MSNBC? 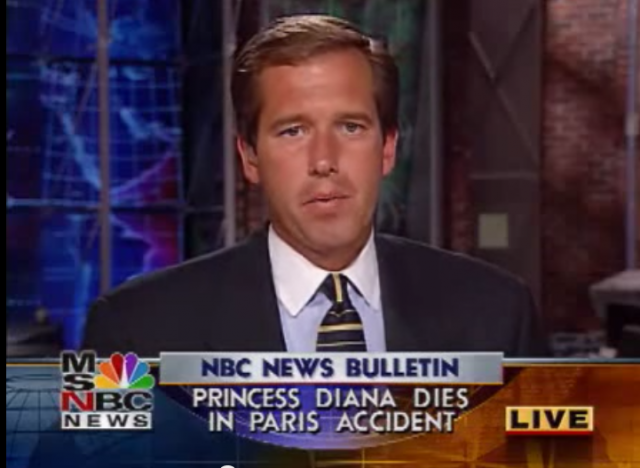 Brian Williams flamed out at NBC Nightly News when it was revealed he exaggerated or invented parts of his life story. Williams was put on leave, and now will be on MSNBC:

In its investigation of embattled “Nightly News” anchor Brian Williams, NBC found that the majority of his tall tales about his reporting took place on late night talk shows and in public appearances rather than while he was on the network.

That distinction appears to have been a major factor in NBC’s decision to keep Mr. Williams, albeit in a diminished role at the network’s sister cable news channel MSNBC. Lester Holt, who has been filling in for Mr. Williams on “Nightly News” since February, was named the permanent anchor….

In his new role, Mr. Williams will anchor breaking news stories and special reports for MSNBC and primarily appear in the daytime. MSNBC’s evening schedule is mostly political talk shows.

“Brian now has the chance to earn back everyone’s trust,” said NBC News Chairman Andy Lack. “His excellent work over 22 years at NBC News has earned him that opportunity.”

The move is being seen as saving Williams’ career, but the real beneficiary might be MSNBC, which is in freefall:

Talk about a tale of two cable news networks. With its 53rd consecutive quarter total audience win, Fox News Channel saw a 10% primetime rise among adults 25-54 in first-quarter 2015 over last year. In fact, with 321,000 on average among the 25-54s in primetime, Fox News thrashed rivals CNN (187,000) and MSNBC (132,000) with more news demo viewers than the other two combined, according to Nielsen.

Contrast that to the fate of the NBCUniversal-owned MSNBC, which not only saw a 39% drop in the demo compared to Q1 2014 but its worst quarterly result in the category since Q2 2005. If that almost decade-old result wasn’t enough of a blow, and rising CNN’s fourth consecutive win over MSNBC in prime didn’t cut deep enough, take a look at the gutting the cabler newser’s nighttime offerings are suffering.

With just 145,000 viewers among the 25-54s on average over the December 29, 2014 – March 29, 2015 period, the once-proud flagship The Rachel Maddow Show hit an all-time quarter low with the worst result since its September 8, 2008 launch. Not only is Maddow down 46% in the demo, but her 9 PM show is also down 19% in total viewers. Fellow primetime show All In With Chris Hayes and Last Word With Lawrence O’Donnell fell to their worst quarterly demo ratings since their respective 2013 and 2010 debuts. O’Donnell’s show also had its lowest total quarterly viewership results. And 7 PM’s Hardball With Chris Matthews had its lowest-rated quarter in the demo since 2Q 2005 with an average viewership of 126,000.

Is it any wonder, given the pathetic MSNBC line up:

In all the current coverage, few mention that Williams helped launch MSNBC in the 1990s:

Amid the reams of information whispered into MSNBC anchor Brian Williams’ ear the night of Princess Diana’s death were two small, but significant, directions. “Welcome the CNBC viewers” and “Welcome the NBC viewers,” producers told their lead anchor as MSNBC went live on its sister networks.

Williams and the fledgling 24-hour cable news network had come face to face with their largest audience to date and their first real test as a legitimate alternative to CNN during breaking world news.

“It just started to crash around me like a wave,” says Williams, who spent the night sifting through conflicting reports of the Paris car crash live on the air. The cable operation, accustomed to measuring viewers by the thousands, was reaching millions.

Williams is back to where he started, and MSNBC is too — few viewers and in deep trouble. Now, who needs whom more?

Brian now has the chance to earn back everyone’s trust

Not mine.
He’ll never earn mine.

“Can Brian Williams save MSNBC?”

Professor Jacobson has a very wicked sense of humor!

He will fit right in there, since 95% of what is on MSLSD is made up anyway.

As far as MSNBC’s death spiral, there will always probably be just enough crazies and loons to just keep them afloat.

NBC Universal will NEVER allow MSLSD to die. They need it to be able to push their liberal agenda as a mouthpiece, so that they never run afoul of the “campaign speech” regulations that they so desperately want to impose on everybody else.

It gives them an ‘out’ to spend enormous amounts of resources promoting a candidate, without actually having to disclose any of those assets. They claim “news” as a campaign tactic, and use that influence to gain traction. It is the worst form of “crony capitalism” because it is packaged to the low/no information voter as being “unbiased.”

Pravda TV really is a natural fit for a self-aggrandizing fabulist who consistently attempts to peddle false narratives. It is undeniably amusing to see someone who presented himself as the ostensible face of objective and serious news reporting now reduced to becoming just another Leftist shill-hack mouthpiece in a motley crew of pathetic fanatic-demagogues.

MSNBC is sinking! Throw them an anchor!
Brian Williams is sinking. Throw him an anchor desk!

MSNBC is dying in the ratings because they’ve made themselves the laughing stock of the cable news business. Their worst problem is a deep and wide credibility gap, in that they have none. But, in a brilliant move, they’e realized that the best way to shore up their credibility is to put Brian Williams front and center.

Not even The Onion could further satirize this move by NBC & MSNBC. I mean, WTF? lolololol

The hubristic hyperbole bubble has burst and out came Brian Williams with his tail between his legs.

Only a few can relate to the presentation of deficit critical thinking aka stupid, hence MSNBC and its deflated ratings.

I think being assigned to work at MSNBC is cruel and unusual punishment … is that legal?

… was Diana’s dying ream: “Brian … remember, the truth … it … it’s just a social construct. Stick … stick to the embellished narrative, Bri … Bri … Brian. You … you’re a news anchorman. That means you … you are a king of … of truth. Say it, and … and it will become true. Now go, before … before the car explodes.”

“It just started to crash around me like a wave,” says Williams …

I see it: a new show called Tall Tales from the Crypt with Brian Williams.

MSNBC, when Williams was there, was (as leftwing networks go) relatively credible. Its major downhill slide has been since he left. If he is to rescue it, he’d have to spearhead massive staff changes, and I doubt they’ve given him that kind of authority.

I’m not sure overhauling the on-air talent will help with credibility when you’ve put Brian Williams front and center, the guy who lost his last gig for serial lying.

I understand he always felt he was Edward R Murrow. In his mind that’s who he identifies with. So in the coming weeks, he will be transforming his identity to look like him.

Another test balloon by MSNBC.
Has it been long enough?
Have the people forgotten their feeling of betrayal?

Liberals progressives with a emotional foundation of “relative truth” can talk themselves into just about anything due to the lack of moral compass. The network is relying on this.

Similarly for George Steph… That was even less egregious in their eyes. Of course he should support Hillary. Everyone should support Hillary. What’s wrong with a network anchor giving six-figures to a favored political figure? How could that indicate a bias or lack of objectivity? And more importantly, most importantly, actually – the only consideration, really is this: Who cares? Certainly the target audience of MSNBC could care less. They are cheering Georgie.

In a world where impartiality, honesty and integrity counts for something they would be out on their ears and on a street corner with cup in their hand. This is not the world we live in, and MSNBC knows it. They are taking the temperature to see if it’s back to “stupid” again.

Good to have the loons all huddled in the same place.