“Our communities are some of the worst in the country” 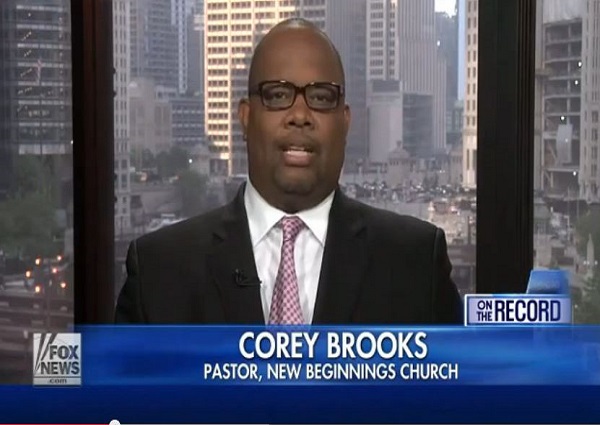 As conservatives, we’ve long claimed that Democrat policies disproportionately harm black communities and families.  And we’ve long been ridiculed for making such claims.  Now, however, a black pastor from Chicago’s South Side is inviting Republican, as well as Democrat, presidential candidates to talk to his congregation because he feels that Democrats have not been as loyal to African Americans as they have been to Democrats.

[Pastor Corey] Brooks isn’t the only person to believe a great change must occur for inner cities across the country to be able to break free from the poverty and crime that envelope them. But the pastor is looking to a different source than others for that change, one that doesn’t usually count O Block among its campaign stops: Republicans.

Look around the neighborhood that contains O Block—Woodlawn—and you’ll see why, Brooks said.

Pastor Brooks is a Republican, according to Hot Air, and has been “outspoken about the results of Democratic machine politics for quite some time. Now, though, Brooks believes that his community and others like it are ready to look for a change.”

So far, only Rand Paul has accepted his invitation to address and meet with his congregation, but both Scott Walker and Ted Cruz are reportedly discussing a visit to Chicago’s South Side.

Somebody smart needs to make this guy an advisor…and not just for a campaign.

Could it be because you’re relying on politicians and the government to fix a cultural problem?

Chicago Dems will pay him to shut him up. The Democrat will brook no independent thinking or truth in their plantations.

They collect you in high-density population centers to facilitate harvesting your votes and to keep the environment green on the other side of the fence. They promote abortion/planning, immigration and invasion, and welfare to reduce the problem set, curry favor, and promote environmental stability, respectively.

This would be a golden opportunity for the GOP/”the Stupid Party”. Hopefully, the Republican candidates will take Rev. Brooks up on that. Or at least the articulate, conservative ones. I’m Tweeting this story to all of them.

P.S. It would be interesting to see how Yeb Boosh would fare in front of that audience.

Neither Democrats nor Republicans can save these communities.

The reason is simple and straightforward: The only ones that can save them is themselves.

And about the education system failing them. Please!
Their schools are bad because they make them bad. Go to any inner city school and you will find the same subculture. There’s no respect for education, for the school, teachers or authority. The few who want to learn can’t, because the school is too busy dealing with behavior issues.

This works for every community

Dorothy: Oh, will you help me? Can you help me?
Glinda: You don’t need to be helped any longer. You’ve always had the power to go back to Kansas.
Dorothy: I have?
Scarecrow: Then why didn’t you tell her before?
Glinda: She wouldn’t have believed me. She had to learn it for herself.

I don’t think they’ve learned it yet, but we’ll have to keep on trying.

They need to renounce to a culture of violence and crime.

Devote money to law enforcement (and maybe get rid of bad restructions) and it will reduce it.

And, by the way, stop forcing people to attend school, without forcing them to learn.

. We have a disproportionate number of people who are incarcerated

He doesn’t say they have a lot of serious crime (and that crime causes all these other things – poverty, bad education etc. – to persist.)

So, he’s not being honest. Nothing can possibly happen until they are really honest.

Yes, they have a lot of people incarcerated, but not enough!!

They are behind the curve.

They need to get ahead of the curve, like New York City did, where eventually the incarceration rate started to go down as well as the crime rate. (best measured by the murder rate – and by the way we do need a Vision Zero for that, and every case should be treated like that involving O.J. Simpson.)

Now, when I say that, that is not meantg to be excluding the possibility there could be somethinbg better to do than a lot of long term incarceration for coparitively minor felonies.

Improved probation (actually coming usually after a period in jail) with quick, but short, stays in jail as punishment for violating rules, has been proposed, and I think they are doing that in Hawaii.

Now that article is from two years ago. I don’t know what’s happened since. There could be some important details left out, like maybe the people selected for this are carefully chosen, or maybe there is a strong incentive for them to stay within the program.

And there are important obvious factors, not left out, but also not mentioned, like the fact that this probably is labor intensive (although maybe cheaper than jail, if it could substitute for it) and all parts of this are working smoothly with no budget constraints causing it to deteriorate – there is no shortage of courts, judges and jail space.

Half truths will get you nowhere.

From the gist of what the pastor said, it sounds like Paul was offering special tax treatment for businesses going into the ‘hood and any employees. Again, nothing said by the pastor nor apparently Paul about what the real problem is in the ‘hood, which is black culture and behaviors. You can GIVE them jobs they aren’t qualified for all day long, but their attitude toward education, developing a strong work ethic, showing initiative, personal accountability, truthfulness, conducting themselves with decorum suitable for the work place, etc., are all antithetical qualities to blacks.

It sounds like Paul was just promising more lipstick for the pig and the reverend was blaming the ‘rats for black failure and poverty. They’re poor because of their culture, period. Until they change their attitudes and behaviors, no business can thrive with them as the labor pool. The behaviors of blacks is what drives businesses and productive people away in the first place. The pastor didn’t address that at all, and apparently Paul didn’t have the cojones to, either. It sounds like just another “We’ll give you more and you give back less” federal “program”. And this from Rand Paul, the great constitutionalist who thinks we should stand down in the face of terror because we have no business in foreign lands but it’s okay for the federal government to get involved with incentivizing private business and manipulating the labor market through the tax code. How original. “Enterprise zones”, created under the lipstick on a pig theory, started in the late 80s and were a massive failure when compared to the claimed objective. So whoopy-do to Rand Paul and his thirty year-old failed idea.

See, THIS is where your racism really comes out.

You see an entire population of people as a group, not individuals. That is the exact opposite of how Conservatives think and act.

And you’re simply wrong and ignorant of history. Black Americans from the Civil War right up into the “Great Society” were people who worked very hard, had intact families, and made the same kinds of commitments and sacrifices for their children’s education as any other demographic in the U.S.

Where the shadow of the “Great Society” has been cast…regardless of race…you see the same devastating effects. The people of Appalachia are a terrible example of this cause and effect. To a great extent, American Indians have suffered the same fate but for longer. Every race of people on the planet are subject to the forces that have ruined so many in our own nation. Scotland used to be known for people who were skilled workmen with an unrivaled work ethic, and deep commitments to family. Now, they are known for hooliganism and living on the dole.

See, this is where your blinders really come out.

I know very well what black culture was before LBJ tore it asunder with his War on Poverty and the Great Society. I know very well that there are droves of black Americans who do not approve of the black ghetto culture. That is beside the point. We’re dealing with the here and now relative to American society today.

The difference between the black ghetto culture and the poor of Appalachia and Native American regions is not poverty but crime. No other poverty-stricken racial group approves of despoiling its properties and businesses, loots, rapes, assaults teachers and police officers, decries education, and randomly assaults whites and Asians just walking down the street minding their own business. Home invasions, car-jackings, and mindless violence for entertainment ARE NOT committed by any other race of people.

And you can call me a racist until the cows come home. I couldn’t care less. It just puts you in the same cadre of racial deniers such as the media and all the enablers and apologists for the pathologies of these people.

“The difference between the black ghetto culture and the poor of Appalachia and Native American regions is not poverty but crime.”

You’re full of shit. Crime is rampant in ALLLLLLLL those populations. It takes a different form on reservations and in the hills, is all. Just like in Scotland.

I had the experience of working with a bunch of white draftees from inner-city Detroit at the end of the draft. They were just thugs. It wasn’t “black culture” or a racial propensity. It was THE culture they grew up in.

You are blind to your own racial hate, and it is never pretty.

It took him an awfully long time to figure that out, despite republicans telling him for years to “Try some thing else” as obama is fond of admonishing people to do.

As I see it, the pastor is pushing the same old racial spoils system blacks have been wanting since forever, he just thinks the Democrats aren’t giving him a good enough deal. He still wants others to take responsibility for fixing what blacks have broken. He isn’t fundamentally changing his politics or demanding other blacks take responsibility for what they do to their own communities.

Let’s see. Bruce Jenner changes (or implies he is changing) certain external characteristics and voila! he is new. Pastor comes out and changes a few external descriptors and voila! he’s new.

Underneath, the leopard cannot change his spots. But Christ can change anything. Maybe we should make it official policy that nobody gets welfare unless they also pray to Christ to change them.