Bernanke is “appalled” at Hamilton’s proposed removal from $10 bill. 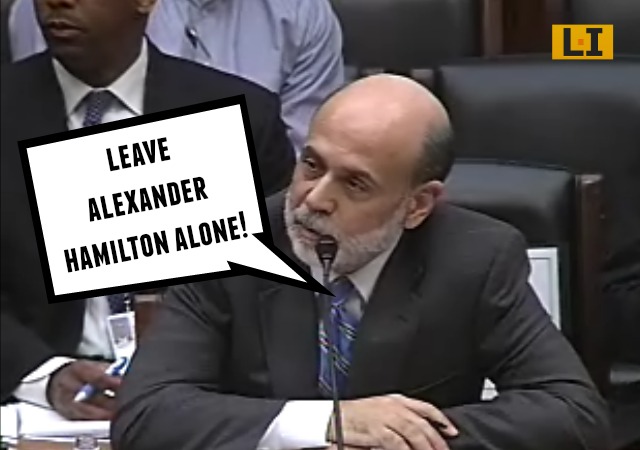 Last week, we discussed the Treasury Department’s ill-conceived decision to boot Alexander Hamilton off the $10 bill in exchange for a yet-to-be-determined gal.

Monday, the former Federal Reserve chairman wrote he was “appalled” by the Treasury Department’s latest announcement. And because it’s 2015, Bernanke blogged his disgust:

Hamilton, the first Secretary of the Treasury, would qualify as among the greatest of our founders for his contributions to achieving American independence and creating the Constitution alone. In addition to those accomplishments, however, Hamilton was without doubt the best and most foresighted economic policymaker in U.S. history.

As detailed in Ron Chernow’s excellent biography, as Treasury Secretary Hamilton put in place the institutional basis for the modern U.S. economy. Critically, he helped put U.S. government finances on a sound footing, consolidating the debts of the states and setting up a strong federal fiscal system. The importance of Hamilton’s achievement can be judged by the problems that the combination of uncoordinated national fiscal policies and a single currency has caused the Eurozone in recent years. Reflecting on those parallels, as Fed chairman I recommended Chernow’s biography to Mario Draghi, the president of the European Central Bank. Mario told me that he read it with great interest.

…Hamilton also played a leading role in creating U.S. monetary and financial institutions. He founded the nation’s first major bank, the Bank of New York; and, as Chernow points out, Hamilton’s 1791 Report on the Mint set the basis for U.S. currency arrangements, which makes his demotion from the ten dollar bill all the more ironic. Importantly, over the objections of Thomas Jefferson and James Madison, Hamilton also oversaw the chartering in 1791 of the First Bank of the United States, which was to serve as a central bank and would be a precursor of the Federal Reserve System.

Like most reasonable people, Bernanke doesn’t object to a woman’s mug on American currency, but that it’s at the expense of Alexander Hamilton? Yeah. No.

Hamilton’s demotion is intended to make room to honor a deserving woman on the face of our currency. That’s a fine idea, but it shouldn’t come at Hamilton’s expense. As many have pointed out, a better solution is available: Replace Andrew Jackson, a man of many unattractive qualities and a poor president, on the twenty dollar bill. Given his views on central banking, Jackson would probably be fine with having his image dropped from a Federal Reserve note. Another, less attractive, possibility is to circulate two versions of the ten dollar bill, one of which continues to feature Hamilton.

I was in government long enough to know that decisions like this have considerable bureaucratic inertia and are accordingly hard to reverse. But the Treasury Department should do everything within its power to defend the honor of Jack Lew’s most illustrious predecessor.

On this matter, I wholeheartedly agree with Mr. Bernanke. Defend the honor of Alexander Hamilton.

since so many things end up at 1.99 or so bring the 2$ bill back and put some scrunt on it.

Like, who cares what this Alexander Hamilton guy actually accomplished, and, his role in America’s founding? He’s a long-dead, rich white man; that’s all that matters; get it?

Now, let’s put some real American heroes on the $10 bill, such as Mumia Abu-Jamal, Bill Ayers and Al Sharpton.

Why a woman? I thought gender was fungible.

Why a woman? I thought gender was fungible.

I was thinking the same thing myself. The whole let’s-put-a-woman-on-the-US-currency movement sounds rather transphobic.

As a single, black, Chinese mother, I think all you clackers are insensitive lacists.

Ye feminists should have Barack Obama in drag placed on your currency along with Billary Clinton and Ma “Rigged” Warren-a whole separate non-male currency just for ye feminsts.

Let’s see where the currency value ends up on Forex.

I should have said “Barack Obama in drag, again”.

Obama in full dress uniform would represent not only the first half-black half-white full “N-word” speaking president but also the female population by ‘proxy’.

Bill Clinton was, of course, the first “black” president who “did not have sex with that woman”. He only “worked there” at the White House.

Hillary Clinton, of course, is the first Secretary of State to blame a YouTube Video for trouble in Libya. She based her findings on reports from the ubiquitous National Inquisitor political boy toy Sidney Blumenthal.

Ma Warren, of course, is the first elected self-declared high cheekbone Senator. Her denominations will be in 32nds. The currency will be printed in her basement since she hates all money that people other than her have earned from Big Business, Big Insurance and Wall Street. The motto on her bills: “In Rigged We Trust”.

who you callin’ a clacker?

Issue an Executive Order declaring that Alexander Hamilton now self-identifies as a woman and leave the bill alone.

OMG. This may be the first sensible thing I’ve heard from Bernanke’s mouth.

It certainly is his “stopped clock moment,” isn’t it?

I guess the way our country’s been infantilized, we’re lucky Hamilton’s not being replaced with R2-D2.

Ace of Spades has gone over the edge recently, and may be completely in the throes of paranoia, but his theory is the Hamilton thing is a feint, to provoke outrage in defense of Hamilton’s role in founding the country and getting it started right. Then, there won’t be energy to muster to protest replacing Jackson on the 20, who is a much less sympathetic figure by today’s standards.

Jackson, though, one of the key figures in developing the strong executive model we’ve had for 175 years or so.

Who cares? He was still a criminal.

This administration won’t get rid of Jackson. He’s considered one of the founders of the Democrat party, after all.

Let’s elevate Hamilton from the $10 to replace Jackson on the $20, which opens a spot for a woman on the $10. This would solve both issues.

Of course the left wants Hamilton removed. He was the founder of the American economy (capitalism) and there is very little or nothing they hate more than capitalism. Which is one of the reasons for keeping him on the $10.

Why not put a woman’s portrait on the $100 note along with Benjamin Franklin’s portrait? He would enjoy the company.