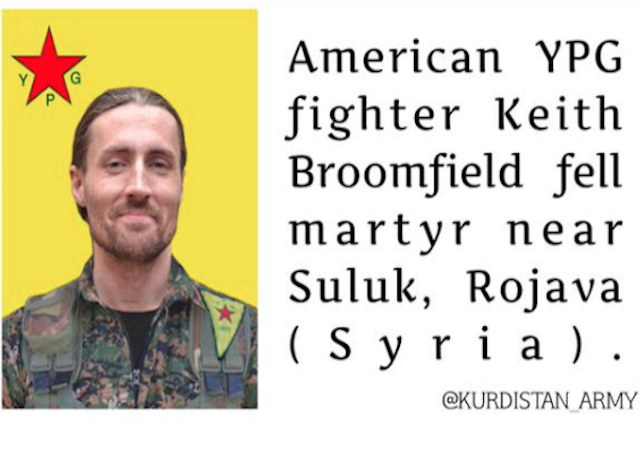 Idris Nassan, Kurdish co-deputy foreign minister of the Kobani district, also confirmed to NBC News that an American who had joined Kurdish fighters died in a battle with ISIS in his area. It was not immediately clear when Broomfield was killed.

Broomfield’s mother, Donna, said she had learned from her other son that Keith was dead.

“I didn’t want him to go but I didn’t have a choice in the matter,” she tearfully told NBC News over the phone from Westminster, Massachusetts.

She said that her son had left to fight around four months ago and that while there was “a little bit of texting” after he first arrived, lately she had heard “nothing.”

“I’m waiting for his body to come back,” she added.

Social media accounts belonging to Kurdish fighters were the first outlets to leak his death, confirming that Broomfield was killed in the Syrian countryside surrounding Kobani.

Broomfield, 36, volunteered earlier this year with a wave of foreign fighters eager to join professional fighting forces opposing the spread of Islamic extremism in Syria. Some groups ban the on boarding of foreign troops, but others have welcomed westerners like Broomfield into the fold in hopes of swelling their numbers.

In February, Kurdish media outlet Rudaw reported that a wave of foreign fighters looking to link up with Kurdish peshmerga forces in the battle against ISIS were being asked to leave. “The Peshmerga is a professional fighting force,” Ministry of Peshmerga spokesman Helgurd Hekmat explained to Rudaw. “Just last week, an American man arrived wanting to volunteer. I couldn’t help him. Yes, they are volunteers, but we have to guarantee their lives, and we can’t do that.”

He said Kurdish law expressly forbids recruiting foreigners to the iconic Kurdish military corps whose name means “those who face death.” “The Peshmerga is a professional fighting force,” Hekmat added.

But some groups have recruited Westerners to help them battle ISIS in Iraq and Syria. A Facebook page “The Lions of Rojava” promotes pictures and stories of white, non-Muslim volunteering to fight with the Kurdish YPG (People’s Protection Units) forces in Rojava, the Kurdish name for the northeastern Kurdish territory in Syria, reported the Huffington Post last year.

Meanwhile with regards to Iraq, President Obama has authorized the deployment of 450 more American troops to train and assist the Iraqi forces battling ISIS. He has also agreed to speed up the delivery of supplies and weapons to both Iraqi forces, and Kurdish peshmerga fighters working under Iraqi command.

This ups the number of American troops in Iraq to 3,550.

If the United Stated given all the weapons provided to Iraq to the Kurds they would have gained control of the whole region and ISIS won’t exist but no, our President is a traitor!

“President Obama has authorized the deployment of 450 more American troops to train and assist the Iraqi forces battling ISIS.”

Those same Iraqi forces who we’ve been training and equipping for a dozen years now, and who drop their weapons and retreat when ISIS comes knocking, even from fortified positions, and even if they outnumber the ISIS fighters 10-to-1?

Americans volunteer to fight ISIS because stopping ISIS and the spread of terror is an important-enough cause that American men and women are willing to lay down their lives for it.

The trouble is, Iraqi fighters have no such cause. Whatever else we can give them — training, equipment, weapons, financial support, etc. — we can’t give them a will to fight. ISIS will continue to spread until someone is willing to stop them. Period. The End.

RIP, Keith Broomfield. Thoughts and prayers are with him and his family.

“One death is a statistic.”

He should be hailed as a hero.

obama is sending 450 more American troops to Iraq. I wonder how many troops he would need if he was to go there for a visit? Maybe 2,000? What a chicken livered coward obama is. Every fighting man knows that you don’t piecemeal your forces as they are chewed up. You do like General Schwarzkopf did and build up an over powering force and then you crush the enemy. You don’t barely keep up with him and take huge losses. Another world leader did the same thing and ignored his generals and lost his country. We all know who that was don’t we?