The War on Masculinity 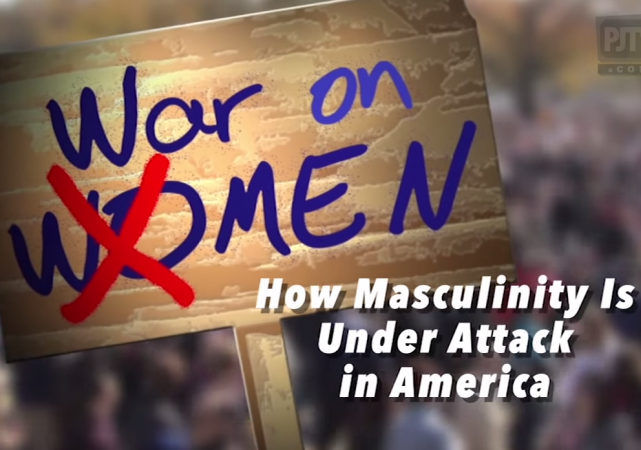 Forget the fictitious but politically expedient ‘War on Women,’ masculinity is under attack. Men are maligned for not being more feminine in quality and character, and little boys are expected to forsake their natural curiosity, fervor, and active nature so as not to offend anyone with their rambunctiousness.

The compulsion to label little boys as violent, soon-to-be patriarchal overlords who can’t possibly understand the plight of women is not only out of control, but is damaging future generations of men.

Boys are diagnosed with ADHD and ADD at substantially higher proportions than girls. Do boys really suffer from attention deficits or are they simply… little boys? “Are we drugging our boys into femininity?” asks Whittle.

While boys aren’t being drugged into femininity per se, Dr. Smith notes that a byproduct of the progressive education movement is a school system staffed predominately with women who know best how to serve girl students. And the boys? There’s really no place for them in this construct. In order to make the transition as seamless as possible, little boys are disproportionately drugged to make them more cooperative in the system built around the needs of little girls.

The progressive left’s troupe of feminist harpies are the worst offenders in the War on Masculinity and examples abound. As Whittle points out, “so much of this is the feminist movement thinking they can get rid of violence by getting rid of masculinity.”

“There are punishments for the mere fact that they are boys and there’s research that shows teachers give bad grades to boys, teachers don’t like what boys do and most of those are female. And so when you add that in to lack of respect that women in the schools, the teachers have for boys, the bade grades that they get, the assumption that a boy is a rapist, a pervert — even a young boy, when you add that in to a mixture of not getting the discipline, that’s where you see the problems really start. Boys are treated as defective girls to be brought under control. They are being in treated such a way that says, “you are a bad person.” And what do you do when you’re called a criminal, you act like one?”

Back to progressivism and social engineering for a moment. Is it possible that early emasculation is caused unintentionally? Scott Ott suggests the tendency to emulate behavior may also contribute to mix. “I’m not sure how much of this is intentional,” he says, “and how much is simply sort of the book of Genesis. Creatures produce after their own kind. And so a cadre of school teachers produce things after their own kind.” Ott continues:

“If you behave like them, if you learn like them, if you’re primarily an auditory learner, if you like to sit still for long periods of time, if you like to have long conversations about things, you’ll do very well. If you’re a kinesthetic learner and you like to be moving all over the place, you’re going to really struggle with the Austrian model of sit down, shut up, line up, and just do what you’re told.“

How do we end the War on Masculinity? “I don’t think you have to do anything to restore masculinity,” says Whittle, “I just think you have to get out of the way of taking it away. I mean it’s really that simple. I don’t think anything has to be done to little boys to teach them how to be little boys or to teach them how to grow up to be men, you just have to stop teaching them to be something else. So much of this seems to be an attack on the idea of limited the strength and speed of males to get them to conform to standards that the progressive left wants.”

The entire segment is here. It’s lengthy, but worth the time to watch.

One thing is clear though, it’s time to end the War on Masculinity.

Because first and second wave feminism was about equality under the law and respect for wimmins.

And the after-waves were increasingly about resentment, denial of nature, queerness, and Marxism.

It went from mutual respect to hatred of all things male, and it’s easy to crush little boys (who can’t fight back effectively).

Now, RadFems have NO respect for themselves or anyone else. They hate humanity, just like all real Collectivists. They are miserable vessels of wrath, who…thankfully…are not reproductive and will die off given a little time.

Meantime, it may be wise to start all male schools and colleges. Again.

Having been in all boys schools from grades 3-12, I concur that bringing back all boys schools is a good idea. There is a entirely different dynamic and discipline in an all boys school that can and does develop strong, productive and responsible adult men – not emasculated parodies of men. Additionally, all girl schools have the same advantage in developing adult women. A third grade boy is unlikely to be labeled a sex offender by the school if there are no girls at the school. He’ll have sneak the childish kiss someplace off of school grounds (personal experience, and she punched me).

Yep, and seeing the vast numbers of metro-dweeb, palid skinned, spikey haired, skinny jeaned, Android pounding, simple courtesy vacant (semi)males out there, it ain’t gonna get better. Or, as my tiny Sicilian Firecracker says: “WHERE have all the men gone??!!”

Go back to gender based schools.

Best way is to home school.

“Dr. Smith notes that a byproduct of the progressive education movement is a school system staffed predominately with women who know best how to serve girl students. And the boys? There’s really no place for them in this construct.”

Funny that. My elementary school was staffed by female teachers (1959-65) and we had no such problems. The difference? They were not commie “progressive” female teachers.

If you are allowing the school system to drug your boys, stop.

It is scary.
Schools and psycho-logists stamp ADD/ADHD labels like it’s nothing.

And some parents are happy with it. They apply for a disability check from social security and all of a sudden Johnny’s label is a source of income for the parents, and for the school.

You have to be crazy to allow your kid’s teachers or some progressive psycho-logist to fill your kid’s body with drugs, just because they want to play cowboys and Indians.

Christina Hoff Sommers’ book, “The War Against Boys:How Misguided Feminism is Harming Our Young Men” (N.Y.,2000) continues–even these 15-yrs later–to be a wonderful read. And, needless to say, the War has been on steroids since publishing date.

And I might point out that all of these people, wonderful though they are, should hang their heads in shame that they are just now noticing that there has been a psychological genocide going on for a couple of decades. The War Against Boys should be a quaint nostalgia read by now; yet it remains timely and applicable to today’s society.

I absolutely agree that there should be separate schools for boys and girls. The homogenous mess called “public education” does not have the patience (and NEVER enough money) to properly work with boys.

In a multiculturalist way public school teachers (most often women) are made to teach with indifference a classroom of male and female students, to the detriment of both genders. And they may end up creating angry young male ‘eunuchs’ in the process.

The public education process tries to neutralize the boys into a state of compliance with lessons and punishments of utter boredom. The process seeks to bring the absolutist sure-of-themselves guys over to the relativistic embracing female side, “where the little ponies and unicorns live.”

AND teachers are taught to be “Change Agents”…
“…the Guidance Counselor’s journal stated in a special issue it published in May 1977on “death education” that all these programs which had “education” hanging off the end of them: “sex, drugs, alcohol, death, bullying”, etc. were designed to do the opposite of what they told the parents and taxpayers they were designed to do. They were designed TO CHANGE THE CHILDREN’S VALUES FROM ABSOLUTES TO NO ABSOLUTES! (NO RIGHT, NO WRONG)”

I’d hang around with Tom Sawyer and Huck Finn any school day.

The “men” have all become beta males and eunuchs it seems. All to keep some snowflake feminists happy. Good grief. What’s next, loss of urinal use just to avoid dominant appearing activity? Maybe if men get a grip and act like they have a set of “dangly things” more women would appreciate it and the snowflakes would melt away.

That is the main reason that there is a war on football and other sports played by males. The femanazis don’t like them, because they teach independence and male values.

Why should the females change anything? They are winning.