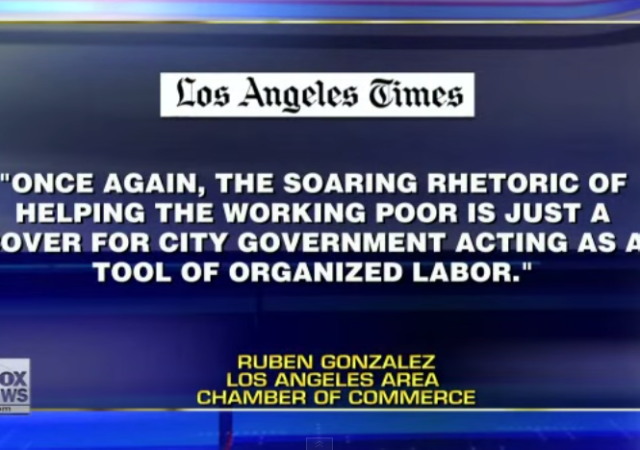 This seems to happen frequently. As we noted in 2013, the IRS and other workers’ unions wanted an exemption from Obamacare, despite the fact that they would be trusted with enforcing it and had been avid supporters of it.

Now labor leaders in Los Angeles, who pushed for a minimum wage hike, are suggesting that unions should be exempt from that very rule.

Labor leaders, who were among the strongest supporters of the citywide minimum wage increase approved last week by the Los Angeles City Council, are advocating last-minute changes to the law that could create an exemption for companies with unionized workforces.

The push to include an exception to the mandated wage increase for companies that let their employees collectively bargain was the latest unexpected detour as the city nears approval of its landmark legislation to raise the minimum wage to $15 an hour by 2020.

For much of the past eight months, labor activists have argued against special considerations for business owners, such as restaurateurs, who said they would have trouble complying with the mandated pay increase.

It’s not difficult to see why unions want to be exempt. If businesses can’t afford to pay the minimum wage, and the only potential employees who are exempt are union members, who will businesses be forced to hire?

“With a collective bargaining agreement, a business owner and the employees negotiate an agreement that works for them both. The agreement allows each party to prioritize what is important to them,” Hicks said in a statement. “This provision gives the parties the option, the freedom, to negotiate that agreement. And that is a good thing.”

Well, except for the part where that’s a lie. But it DOES sound all “freedom-like” and all, dunnit?

The lie comes in here: a union member subverts their interests to the interests of the union, and has absolutely no way to forge an agreement that represents his/her individual values. The union negotiators negotiate the UNION’S interests.

Commie Lib unions are good at talking that “freedom sounding stuff”, but they, like all the Left, are liars and bait and switch artists.

Plus – it would cost the Unions much more when they hire Craigslist protestors to man their picket lines.

Effectively this becomes a back door way of creating a bill of attainder with specific groups or people engaged in the same activity being punished under the law based on their affiliation or lack thereof.

Time to stop the dems and their fascist schemes to take away our liberty.

For Unions to accomplish their avowed purpose they must support the suppression of the wages of their neighbors and other industries.

If other workers gained higher paying jobs, the cost of living would rise thus canceling any gains by the contract negotiations of the Union.

For Unions to “work” they must keep the cost of living low while raising their members wages so as to allow them to live a better life style. Unionism is always about envy, greed and sloth. Not about uplifting the community or the industry.

Increasing minimum wage obfuscates the causes for its need. End the public deficit that devalues capital (e.g. savings) and labor. Reduce excessive immigration, especially unmeasured (i.e. illegal) immigration, to end dilution and rationing of our economy and societal programs. Rescind inequitable trade agreements. Constrain environmentalists, unions, and other lobby groups that warp the government and economy. Correct converged migration and immigration patterns that create a need for a multi-trillion dollar welfare economy to compensate for disparities in high-density population centers and related factors.

This is a repeat of the Obamacare reform. There are reasons, including reduced personal liability, why Democrats, Unions, etc. favor national redistribution schemes. The same reasons that required Democrats to oppose auditing of the public and private financial industry, especially the high-value mortgage sector, that redistributed debt in order to ensure progressive asset prices, while controlling monetary inflation.

That said, there must be more than a few Republicans who have overlapping and even convergent interests with Democrats in order to successfully prosecute these schemes.

Minimum wage would be cheaper than hiring union members who work three hour days. All one has to say is “It’s a safety concern” and they sit on their ass until the problem is resolved . . . until the next problem. It takes three union workers to equal one “real” worker.