TV Host on Obama: “A White President in Blackface”

TV Host on Obama: “A White President in Blackface” 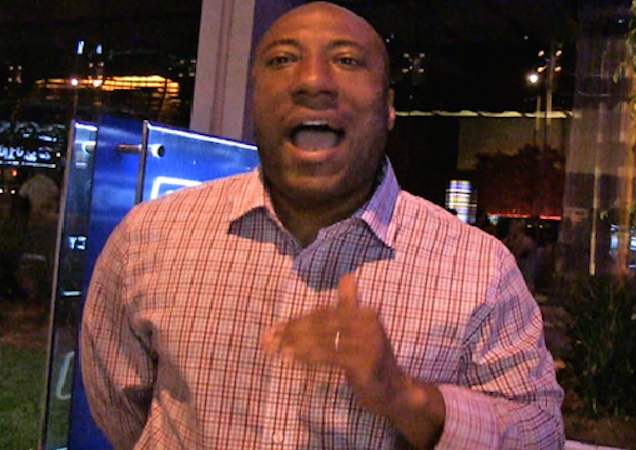 Byron Allen is a TV personality and entertainment executive turned concerned citizen, and he wants you to know that he is not happy with the way Obama’s presidency has affected the well-being of the black community.

In a street interview with TMZ, Allen lashed out at President Obama, saying that he hasn’t done enough to give black people in America a leg up.

Via the Hollywood Reporter [emphasis mine]:

“Black people have fallen further behind under President Obama,” said Allen, who also criticized Obama for having referred to the looters and arsonists in last month’s Baltimore riots as “thugs.”

In their coverage on this, Mediaite remembers that Allen isn’t exactly new to the race game. He recently filed a lawsuit against Comcast, claiming that the company paid off Al Sharpton, and accusing Comcast of having a policy of not dealing with “real African-American-owned companies.”

Allen may be a perpetual race-baiter (in his comments about Comcast’s dealings with the black community, he likened the relationship to, “just give him 50,000 and a bucket of chicken and we’re good,”) but we can still glean a nugget of wisdom from this interview. As a country, we will never know how things may have been different under a white president; that decision has been made, and now we’re left to deal with the consequences of our actions. What we do know is that, since Obama was elected, we’ve seen a dramatic uptick in the number of people who are willing to publicly focus on race as the deciding factor for…just about everything.

Maybe that’s the problem. In fact, I’d be willing to bet that that’s the problem. We’ve become so focused on race that every other piece of information is either shunted to the side, or added on to the analysis as a footnote. What happened in Baltimore isn’t just a black problem; it’s a human problem rooted in ignorance and poverty, and something that everyone should be paying attention to.

People like Allen, however, can’t focus on anything beyond the skin-deep differences of the people in the streets.

In Obama’s America, there’s no such thing as black and white, living and breathing and succeeding and hurting together; there’s only division, and a battalion of lieutenants tasked with maintaining that division.

The narrative depends on it.

“…a battalion of lieutenants tasked with maintaining that division.”

But it’s all composed of volunteers. There’s good money in it, and the perks are GREAT…!!! Why, you, too, could be someone…a mini-Malcolm X. If only for a few minutes.

LOL. Who didn’t see this coming?

It was obvious that as soon as Obama’s presidency began to be recognized by the public as a massive failure, the idiots who put Obama in the job (for which he was always clearly unqualified) would claim that the real problem was that Obama wasn’t black enough.

But wouldn’t that mean that criticizing him isn’t all that racist ?

I’ve always held that Barack Obama is as White as his mama.
He just looks dark because he is so full of sh**.

By what metric can anyone say blacks are better off today than 8 years ago?

So what?! Our president is black.

By what metric can anyone say that anyone is better off today than 8 years ago?

Why should a particular President benefit any one group of citizens to the detriment of others?

Most white people aren’t any better off either, but white lives don’t matter.

Neither do black lifes matter to Obama, nor yellow, or red, or purple, or……

I guess that “entertainer” wanted Obama to just be a black president for blacks only.

This guy is confusing skin color with policy initiatives, just like so many other talking heads have done.

BO’s skin color hasn’t failed, but his policies, which are radical Democratic policies untutored by the experience of the last 50 years or so, have failed.

So, what Byron Allen should have said is that “Black folks would have been better off under a Republican president.”

It’s a little silly to equate white with Republican, especially in light of the way the Repubs have supported excellent minority candidates for governorship of the various states, but Democrats have been mischaracterizing the Republicans as the “white” party for years.

Oh, silly black man, Obama already has both of your votes. Now it’s time to move on to those nice brown people who’ve just moved in.

As badly as suddenly flooding the job market with tens of millions of new LEGAL workers will be for unemployment generally, it WILL mean the sharpest impoverishment move for black Americans EVER.

We need to remember that the BEST growth of the black middle class in many decades happened under Reagan (who, also, screwed up with his amnesty).

There is a significant portion of the population which believes that it is the proper duty of blacks to stick it to whitey. But of course that didn’t start with Obama; recall Thurgood Marshall’s “… now it’s our turn.”

What puzzles me is just what these sorts see as the end game. At one time activists and reformers had some goal in mind, impractical or unattainable though it might be. Everyone from Upton Sinclair to Benito Mussolini had a vision of the ideal society, something worth working towards. But what does Byron Allen (or, for that matter, Thurgood Marshall) envision? A United States with no white people? Or perhaps a country with blacks enshrined as a perpetual special semi-pampered class, spending their lives shuffling from one free government handout to another? These are not attractive futures for anyone.

That’s a very nice little pickup, Mr. Swift. With the current black activists, you do feel a little bit of that 60s/70s protest vibe, but back then there were other silly-sweet idealistic goals at the end of their revolution once equality was established: peace, love, and unicorns in the new diverse utopian order. But not these current wailers. No sweet idealism. They all basically whine, “I’m black! You owe me! Gimme something!”

Super Soetoro is fighting the greatest battle of all to save all of mankind: AGW.

Jobs for black Americans, black on black crime, the slavery of bureaucratic welfare, these issues are nothing compared to what Super Soetoro is dealing with.

I wonder if ‘illary is selling capes at her boutique?

“Jobs for black Americans, black on black crime, the slavery of bureaucratic welfare, these issues are nothing compared to what Super Soetoro is dealing with.”

Heh. Those are Democrat Get Out The Vote programs. Hell no, he won’t address them.

This I guarantee – if AGW policies are successful in taking precedent over American law, the first thing the Obamas and Clintons of the world will do is allow ‘AGW refugees’ into the US from all over the world, along with a wide open southern border, all in an effort to demographically design an America that has no majority population based on race or religion. They will build coalitions of nonwhites to marginalize or eliminate the hated, old guard, source of all problems, white race.

I hereby renounce my white maleness and from here on consider myself a female of asian descent, perhaps Cambodian, or maybe Philippian.

Miss Henry, maybe you are Thai. Do you have a good pad thai recipe?

Well, I’m gray-haired and my eyes look like two piss holes in a snowbank most of the time, but I’ll give it a whirl. My hair is pony tail length and quite beautiful, I’m told, when I comb it out. (wink)

I combed mine out completely a few years back.

Plus it is incorrect.

Let me correct it for him.

“Obama is a Saudi in Blackface!”

Actually, to be technical and accurate, the man who calls himself Barack Hussein Obama is a mulato in a Muslim face.

Yeah, the baby daddy was a Kenyan Saudi.

Thugs would have done better anyway, or at least they wouldn’t have been called names.