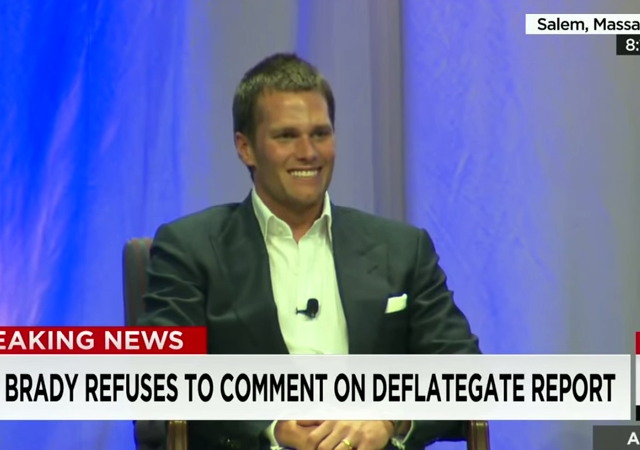 There’s an old saying that there’s no such thing as bad publicity. That rule seems to be working for Tom Brady of the Patriots, whose merchandise is way up in sales since the announcement of his suspension over Deflategate.

Quarterback Tom Brady and the New England Patriots organization have come under fire since the 243-page “Deflategate” report was released last week by attorney Ted Wells, who was hired by the NFL to investigate claims the Patriots used underinflated footballs during the AFC Championship game against the Indianapolis Colts. The report concluded that “it’s more probable than not” that Patriots personnel “participated in a deliberate effort to release air from Patriots game balls after the balls were examined by the referee.”…

Since the Wells Report was released on May 6, Brady was the NFL’s top-selling NFL player, outside of the two top draft picks Jameis Winston and Marcus Mariota, according to Fanatics.com, the largest online retailer of officially licensed sports merchandise (Brady ranked sixth prior to the report). The Patriots are the second highest-selling NFL team behind the Cowboys, up from fourth before the report. Brady gear has spiked 100% since the suspension was announced Monday.

This might explain why Brady looked like the cat that swallowed the canary in interviews this week.

Jessica Golden of CNBC has more:

According to Fanatics, the largest retailer of officially licensed sports merchandise, sales of Brady gear have spiked 100 percent since Monday, when the NFL announced he would be suspended for four games next season.

“Our sense is fans are rallying behind Brady and the Patriots and supporting them,” said Jack Boyle, president of merchandising for Fanatics.

Since May 6, when the NFL reported that the Patriots and Brady likely knew that they were using deflated game balls—which presumably are easier for receivers to catch—Brady has been the third-best-selling NFL player on the site after Marcus Mariota and Jameis Winston, the two top NFL draft picks.

This week, Brady gear is doing even better. “His jersey was the leading item the last 24 hours,” Fanatics said.